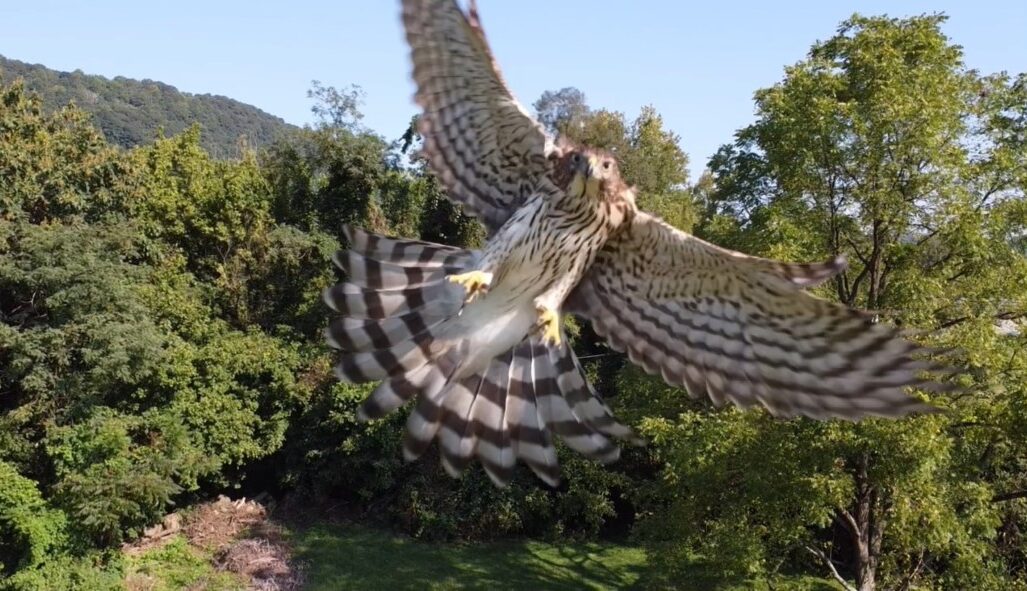 The last thing prey typically will see when a hawk is closing or the kill.

BELLE, W.Va. — Justin Rucker is a student at Riverside High School in Kanawha County. He’s also a student at Carver Career and Technical Center where one of his classes is learning to fly a drone.

“There’s plenty of things you can do with a drone, but I’d just like to do it as a side hustle. You can get some really cool pictures with a drone,” he said.

This week, he may have gotten the coolest picture ever. He and his classmates were flying the drone in eastern Kanawha County as part of a class exercise, when the unthinkable happened. A hawk came out of a distant stand of trees and attacked the device mid-air.

“We were learning how to do some maneuvers and I had done one and just happened to be facing that direction. One of the observers yelled, “Bird, Bird, Bird!” he explained.

It was an exciting event, but even more exciting for Justin was the realization he had the drone facing the hawk head up when it attacked.

“I thought I was facing that direction and told them I thought I got it on video,” he said.

He had. The video clearly showed the hawk coming in from a distance of 50 to 100 yards. It happened in the blink of an eye, so the video wasn’t terribly compelling, but the still photo pulled from the video was the money shot.

“I guess it thought it was a smaller bird and he was going to eat it for lunch,” laughed Rucker.

Rucker may be able to take some cool pictures in the future when he become proficient with the technology, but he’ll be hard pressed to find one cooler than an ambitious hawk who got the shock of his life over the upper Kanawha Valley.

Outdoors
Justice unveils latest quail reintroduction effort for West Virginia
Governor Jim Justice is directing an effort which will put 21,000 quail into seven public lands in West Virginia in an effort to reintroduce the long lost birds to the Mountain State.
By Chris Lawrence
Outdoors
West Virginia crew enjoys a back country fishing experinece
Sammy Pugh of New River Trophy Outfitters decided to give the U.S./Canadian border a look for a remote fishing experience earlier this summer.
By Chris Lawrence
Outdoors
Charleston man cited for alleged hunting violations
Man pleads not guilty and now awaits court date for charges of hunting on a revoked license and other charges for a buck killed in the Charleston City Limits as part of the local urban hunt.
By Chris Lawrence
Outdoors
Lawmakers hear pros and cons of State Park off-road riding
Advocates believe there is untapped potential for growth and revenue with off road riding in West Virginia State Parks, but opponents warn that will drive away every other user group and kill what makes the park system special.
By Chris Lawrence
View AllHoppy's Commentary