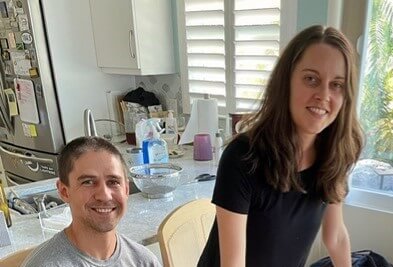 NOKOMIS, Fla. — Two West Virginia University graduates who live in southwest Florida are safe after Ian slammed into the Gulf Coast as a Category 4 hurricane leaving behind massive destruction.

Elizabeth and Manu Chicoine live in Nokomis, which is about an hour north of where the eye of the storm hit in Fort Myers Wednesday afternoon. They decided to travel about 10 minutes south to stay overnight at Elizabeth’s parent’s house in Venice.

“I think we definitely got very lucky,” Elizabeth said during an appearance on Thursday’s MetroNews “Talkline.”

The wind started to pick up around 3 p.m. Wednesday. During their drive to Venice, the Chicoines saw the start of what would eventually become complete devastation.

“It was very windy, rainy, no lightening and no thunder, but the trees were swaying back and forth and I was definitely a little scared,” Elizabeth told “Talkline” Host Hoppy Kercheval.

The area was flooded with no way out for most people. Fortunately, the couple lives on the second floor of a condo building, so even if they did stay at their home, Manu said they would’ve been fine.

“If we would’ve stayed here, I wouldn’t have been very worried about the flooding at all, but Elizabeth felt safer going inland slightly more to where her parent’s home is even though it was more south,” he said.

Manu said their decision to stay was based on the trajectory of the storm. While it was unknown, Manu said he felt they were positioned in a way that would put them out of harm’s way.

“It didn’t seem like we were going to get a ton of flooding. We’re not on the beach side of (Route) 41. I felt like the keys and the islands would get the most flooding,” he said.

“I think they had a tree where one of the branches fell, but that was it, luckily,” she said.

The couple still has internet, too.

“Even up in Sarasota, I have co-workers up there who aren’t able to get on the Internet and at least we have 5G we can get on,” Elizabeth said.

The Chicoines were also with their 5 year old daughter Elle who is also safe.

The storm is expected to travel north in the next few days and dump several inches of rain in West Virginia on Saturday and Sunday.