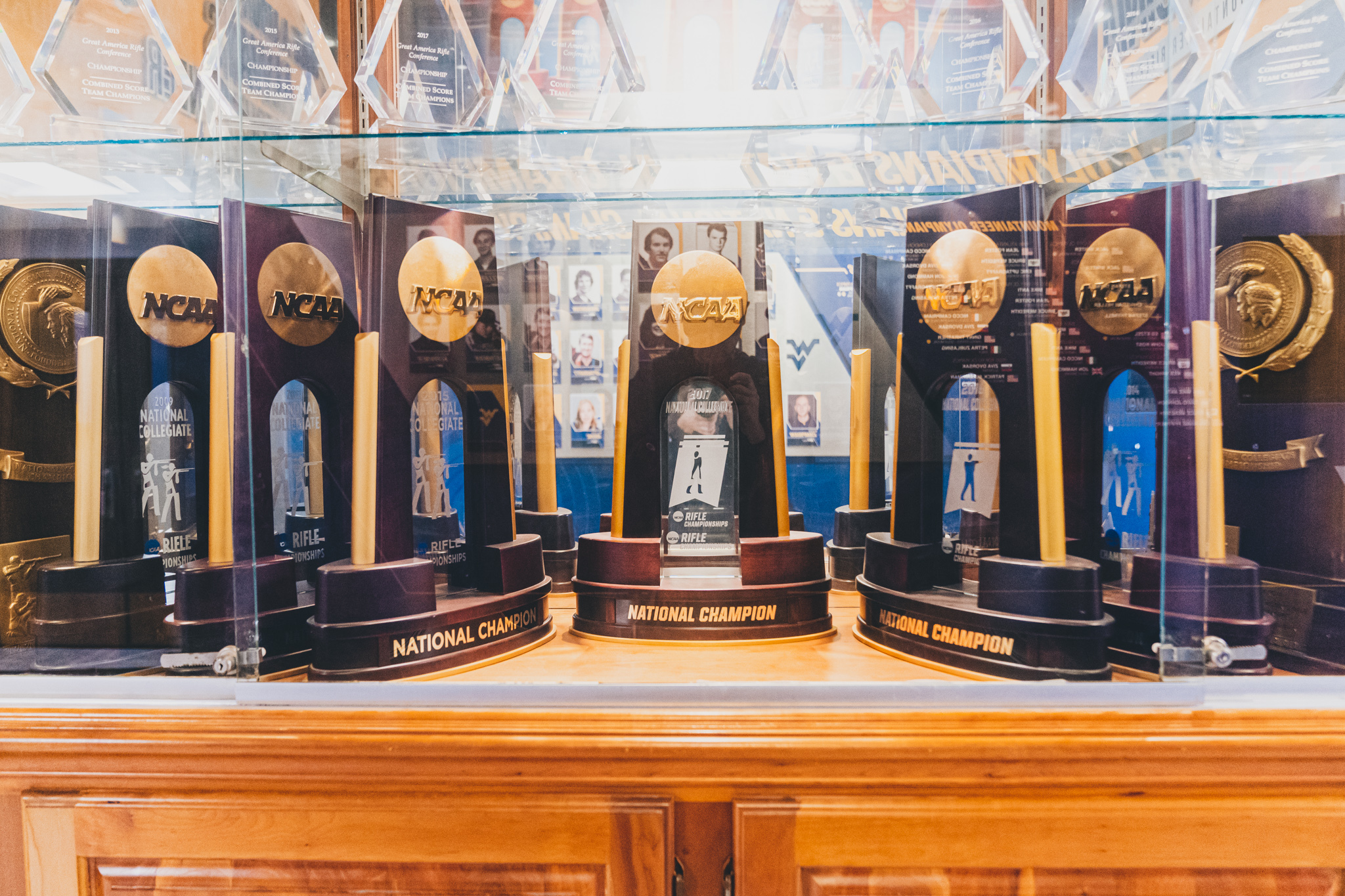 The hardware in the WVU Rifle teams trophy case commands a high level of respect with unequaled success.

MORGANTOWN, W.Va. — Mountaineer Rifle Coach Jon Hammond hopes sportsmen and women in West Virginia will feel generous as they buy their next hunting and fishing license. This year those who buy their annual license year-to-year will be offered a checkoff box to make a donation to the WVU Rifle program.

“We’re always trying to find new ways, and this was something some of our fundraisers and supporters wanted to do, to create a check off box to make a donation to the team when you purchase your hunting and fishing license,” said Hammond.

The effort wasn’t easy. It took three or four Legislative sessions until the measure cleared all of the necessary hurdles to get to the Governor’s desk. Governor Jim Justice signed the measure earlier this year.

“We’re incredibly grateful to have it and fingers crossed, the people who love to hunt and fish in West Virginia may be more inclined to support the rifle team more so than other teams since there is an affiliation between the rifle team and those who enjoy hunting and fishing,” he said.

The WVU Rifle Team does receive funding from the WVU Athletic Department, but like other Olympic Sports, the money is always tight, especially after the pandemic.  Hammond said they are competing against better heeled teams across the nation. The coach said direct donations designated exclusively for rifle help narrow that gap in funding.

“People who are Mountaineer fans who come to football and basketball games and are connected to our Mountaineer Athletic Club always get more information about how to donate, but this may help us pick up a different crowd,” he said.

Hammond hoped shooters and sportsmen would feel a kindred spirit with the shooters at WVU and be willing to support advancement of the shooting sports.

“They’re outdoorsmen and they like guns, and hunting and shooting and they probably have more likelihood to say they want to help the rifle team out and they like what we’re doing,” he said.

The checkoff boxes allow you to designate the amount of money you’d like to allocate to the team above the cost of your hunting and fishing license.

Outdoors
Gilbert, W.Va. hunter is November winner in the Hoodoo Sports Trophy Photo Contest
Jessie Hatfield of Gilbert, W.Va. wins a Hoodoo tumbler set after his picture was randomly drawn from all entries.
By MetroNews Staff
Outdoors
Charges dropped in McDowell County poaching investigation
David Craft, formerly of Statesville, N.C. fought allegations he illegally killed a deer in McDowell County until the case was finally dismissed earlier this year
By Chris Lawrence
Outdoors
Logan County hunter kills an oldie
It's rare for any buck in West Virginia to outlive his physical potential, but the buck killed by Bucky Sargent of Logan in November 2022 led quite a life to the very end.
By Chris Lawrence
Outdoors
Singer Donnie Davisson finally bags the Big 8
Half of the country music duo The Davisson Brothers shares the story of hunting a big buck on his family farm in Harrison County
By Chris Lawrence