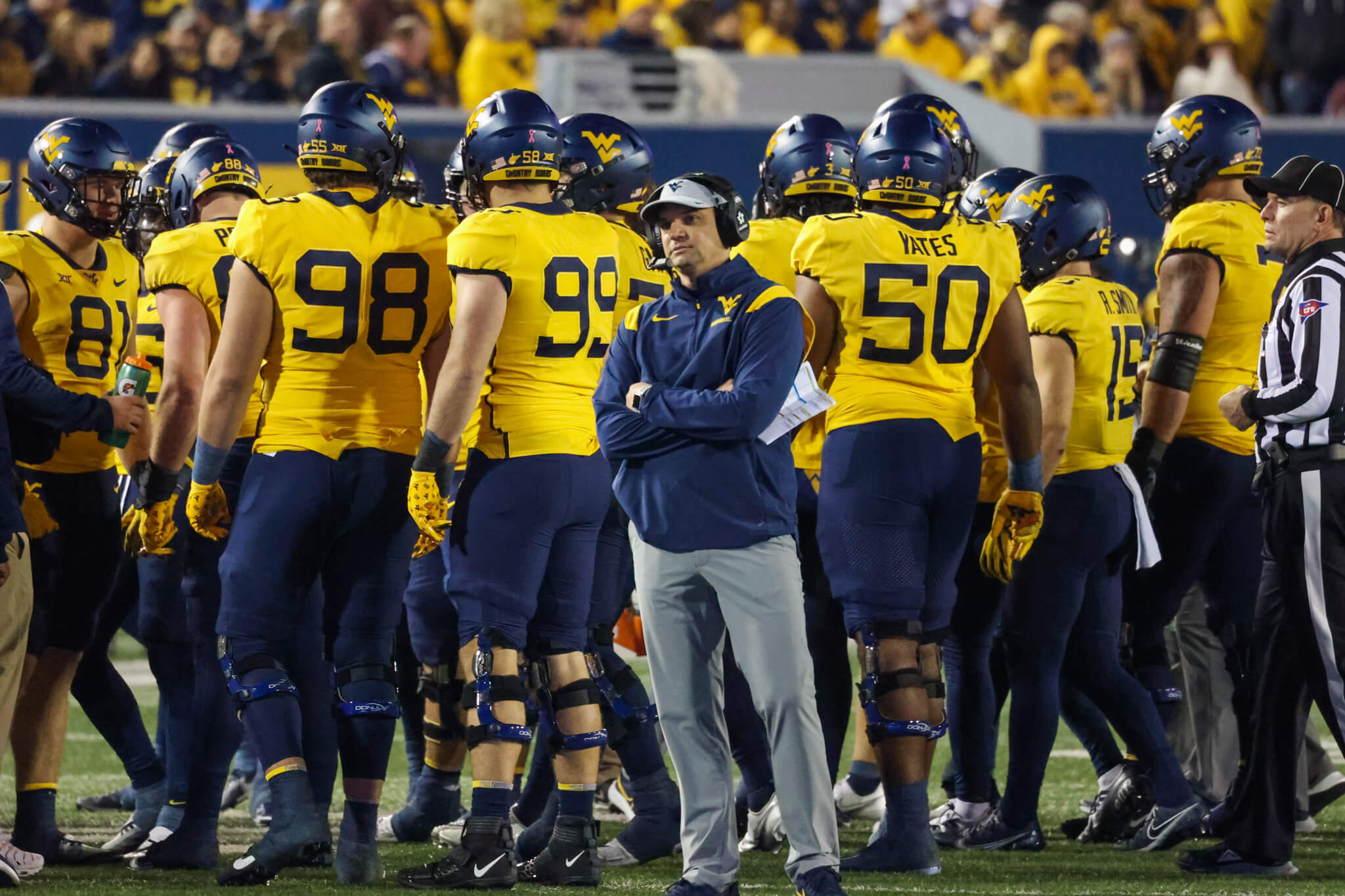 Head coach Neal Brown looks on while WVU players gather behind him. Photo by Teran Malone

MORGANTOWN, W.Va. — Both West Virginia and Texas Tech have the luxury of extended time off in advance of Saturday’s 3 p.m. matchup at Jones AT&T Stadium.

Considering the amount of injuries both teams have endured, it’s safe to assume a lengthier layoff between games is welcomed.

West Virginia, which will go eight days between last Thursday’s 43-40 win over Baylor and the battle with the Red Raiders, endured losses to its secondary against the Bears. Additionally, top tight end Mike O’Laughlin missed the matchup with an injury suffered at Texas.

On Tuesday, WVU head coach Neal Brown confirmed O’Laughlin will miss the remainder of the season with the third major knee injury of his college career.

“Mike O’Laughlin, unfortunately out for the year. He will have surgery this week on a knee,” Brown said. “I really hurt for him. It’s a tough deal. It’s the third time now and I feel for him. He was playing at a high level.”

Starting cornerbacks Rashad Ajayi and Wesley McCormick both left injured during the win over the Bears. Ajayi is expected back this week, while Brown labeled McCormick “probably questionable.”

Cornerback Charles Woods, sidelined since suffering an ankle injury that required surgery during the first quarter of the season opener at Pitt, could be back to make his Big 12 season debut against the Red Raiders.

“We’re going to practice Charles Woods some today and know more,” Brown said. “Hopeful and I wouldn’t say any more than that yet. If he does play, it’ll be in a reduced role. By no means will it be every play.”

Woods was a preseason All-Big 12 selection after steady progress throughout his first season at West Virginia in 2021 after transferring from Illinois State.

Tailback CJ Donaldson, who suffered a concussion and was carted off the field in a loss at Texas on October 1, practiced Tuesday and Brown said, “if everything checks out, then he’ll be free. He’ll be ready to go.”

Donaldson, a true freshman, was West Virginia’s leading rusher before missing the Baylor game. Tailback Tony Mathis now holds that title after a career-high 163-yard effort against the Bears.

“He hasn’t put on shoulder pads,” Brown said of Donaldson. “We put a helmet on him just to get him used to it, but he hasn’t had any contact and hasn’t practiced with the team since the Texas game. There’s going to be a little rust. A lot of how we use him Saturday will depend on how he practices today and Wednesday.

Among other injuries affecting the Mountaineers, defensive end Sean Martin was shaken up against BU and is “hopeful to questionable”, according to Brown, who said he should have a definitive answer on Martin’s status during his weekly radio show Thursday night.

Offensive lineman Jordan White began the season at right guard, but has only played against Pitt and Towson. White is expected to see his first Big 12 action of the year in Lubbock, Texas.

“He got rolled up during the bye week,” Brown said. “Nothing serious. He wasn’t 100 percent and it’s not fair to put him in that situation against those guys.”

Even with West Virginia having extra time between games, Texas Tech has an advantage on rest with a full two weeks between contests. The Red Raiders last played October 8 at Oklahoma State, and Saturday’s matchup with the Mountaineers marks the third time Tech will face West Virginia with two weeks to prepare in Brown’s four seasons as head coach.

“It’s just as much a mental break,” first-year Texas Tech head coach Joey McGuire said. “When you’re still able to play the game, but you’re banged up, it’s a real strain on you mentally.”

Most notably, the Red Raiders have battled injury to each of their top three quarterbacks — Tyler Shough, Donovan Smith and Behren Morton.

Shough suffered a shoulder injury in the season opener against Murray State and has not played since. Smith has played in all six games, though his action was extensive in the first five before throwing one pass against the Cowboys while battling an AC joint sprain in his right shoulder.

Redshirt freshman Behren Morton was the starting quarterback against OSU and has appeared in five games, though 62 of his 79 passes attempted came against the Cowboys. Morton battled through injury to finish that contest.

After seeing Shough and Smith throw over the weekend, McGuire indicated all three quarterbacks could play Saturday.

“It was good to see Tyler throw. He was back in shoulder pads [Monday] and looked really good,” McGuire said. “He’ll practice [Tuesday] and we’ll see if he’s going to be released. If he’s released, you’ll see all three quarterbacks and if not, you’ll see both quarterbacks on Saturday.”

While Morton’s health has improved, the time off was especially beneficial to Smith, according to McGuire.

“On Sunday, Donovan was as healthy as he’s been,” McGuire said. “He looked really good and felt great. He had great energy. It was good to see Behren out there. We were kind of back and forth if we were going to let him take another day and watch, but he wanted to go. He threw the ball really well. We went 7-on-7 and it was full speed except for contact, since we weren’t in pads. He got out of the pocket and was able to move.

“I really feel good about saying we’ll have both of them available and they’re in a really good frame of mind. For all three of them, the bye week was good, but watching Donovan, it was the best for him having no contact whatsoever for five days. His arm was really live. We’re excited to see them both out there.”