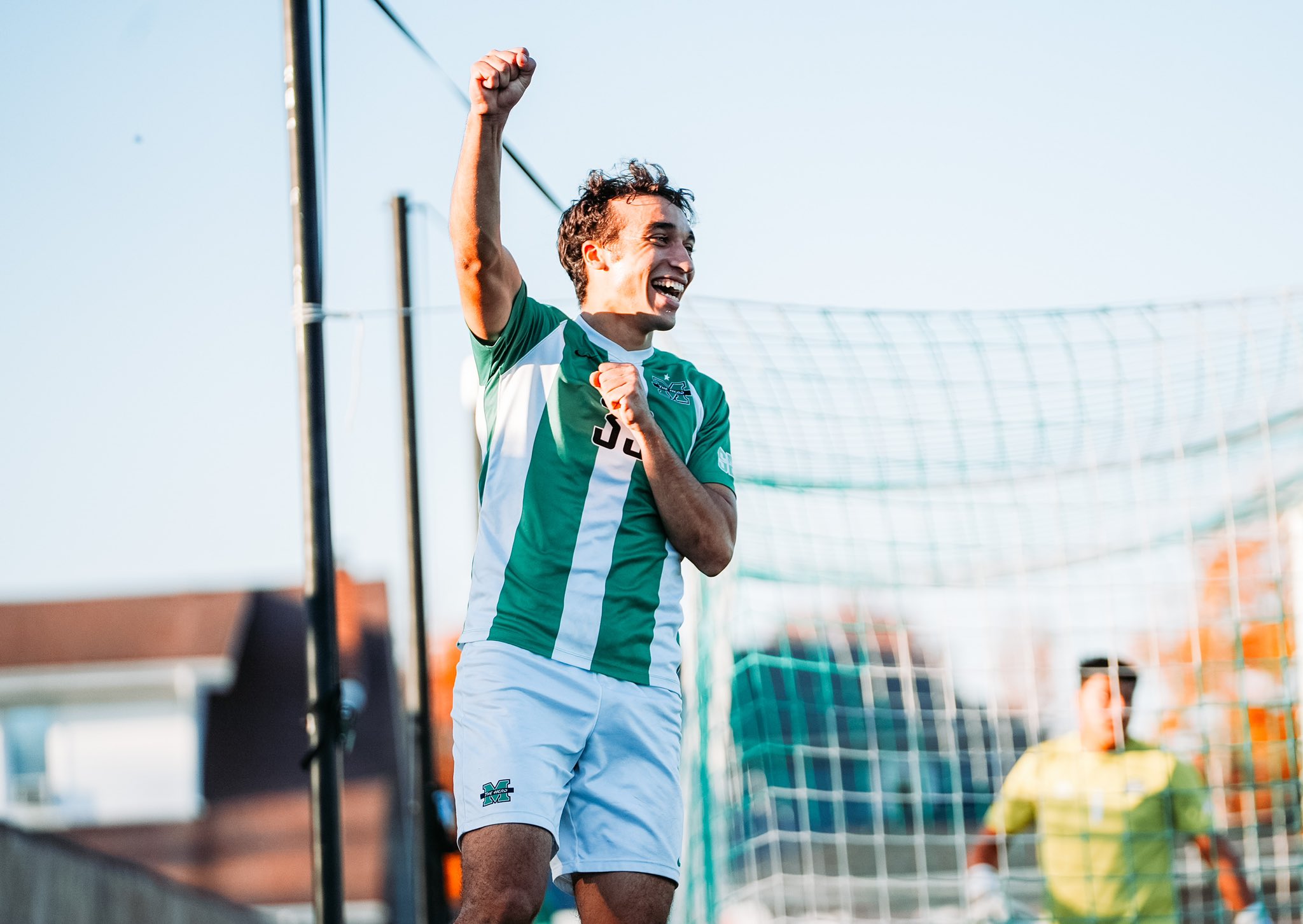 Adam Aoumaich scores for Marshall in a win over Georgia Southern. Photo courtesy of Marshall Soccer/@HerdMSoccer

HUNTINGTON, W.Va. — Only fitting some of the seniors honored on Senior Day got into the scoring column.

Joao Souza, one of the seven seniors recognized by Marshall after the Sun Belt Conference match, had a goal, Milo Josef a goal and two assists and goalkeeper Oliver Semmle allowed just one goal as the Thundering Herd defeated Georgia Southern, 6-1, at Hoops Family Field/Veterans Memorial Soccer Complex. Backup keeper Gabe Sitler took over for Semmle at 74:06 and finished the match.

“We were professional in our play and our performance,” Herd coach Chris Grassie said. “I think we had the challenge of the guys to be a little bit more dangerous. You know Georgia State and even ODU now I think we would win those games, but we didn’t commit to really get in the boxes and kind of today for a moment we did. You know we looked like a team that was going to be very dangerous. We asked for that one percent more passion.”

Freshman Matthew Bell, who leads the Herd and Sun Belt in goals with eight, got two assists. He found Morris Duggan at 13:03 and Souza at 20:11 for a 2-0 lead at halftime.

Adam Aoumaich scored at 66:22 with Josef getting his second assist. Josef responded with a goal at 74:07 to set the final score and spark another celebration among the 1,453 fans in attendance. The Josef goal was his eighth of the season to tie Bell.

Before that goal, Manual Prieto racked up a unassisted goal at 66:22 to avert the shutout for the Eagles. It came on a free kick.

Marshall had 24 shots overall with 10 on goal. The Eagles totaled four shots and one shot on goal that went in.

The all-time series between the two teams is now tied 3-3-1. The Eagles have their Senior Day on Friday at home against West Virginia.

Seeing his seniors compete with large crowds every home match is special to Grassie.

“The seniors, to have this crowd at your back it’s fantastic and we appreciate the support,” Grassie said. “Seniors talked about it before the game how much this has grown in that time since they’ve been here. Four, five years. It just makes it so much fun. When they go and play and then have them stick around for Senior Day is special.”

Georgia Southern coach John Murphy said the Herd made a big impression on him.

“I think we say why Marshall is a top-ten team and considered a team that’s going to be in the mix for a national championship,” Murphy said. “There were times where we started to get back into the game and they would ratchet up their tempo and made it very difficult.”

In the first half of the doubleheader, Marshall defeated Texas State, 4-1, to stay in the hunt for a bid to the Sun Belt Tournament starting Oct. 31 in Foley, Ala.

Kat Gonzalez scored for the Herd in the sixth minute for a 1-0 lead. The Bobcats got the equalizer in the 20th minute from Madi Goss. Leading scorer Morgan White scored in the 50th minute to break the tie for the Herd. Gonzalez notched her second in the 61st minute and Luiza Travassos wrapped up the scoring and win in the 63rd minute.

Both teams have their final matches Thursday. Marshall goes to Old Dominion and Georgia State is home against Georgia Southern.