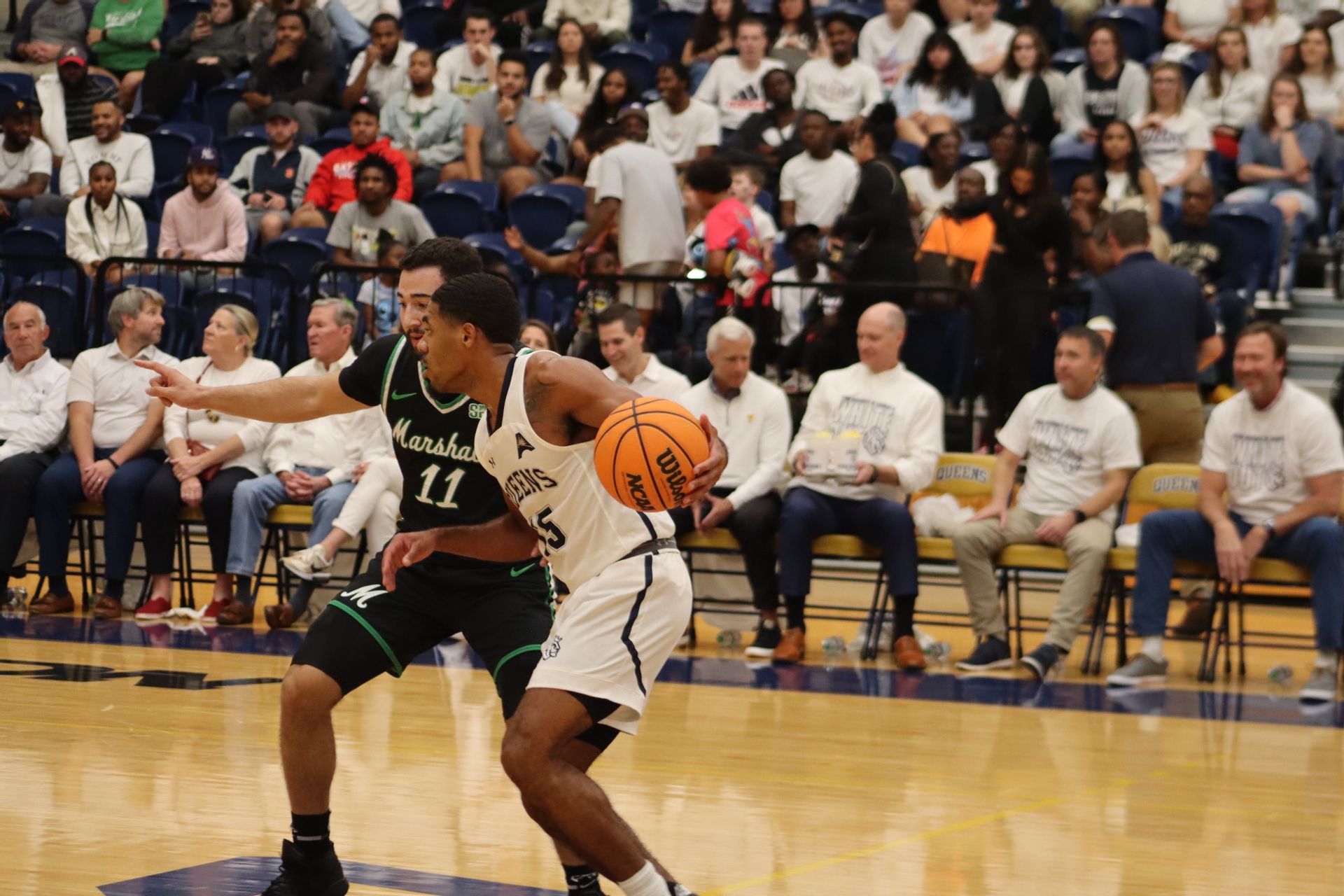 Queens University made its Division I debut quite memorable Monday night as Kenny Dye converted a layup with 9 seconds left to lift the Royals past Marshall, 83-82, in front of 1,608 vocal fans inside Curry Arena in Charlotte, N.C.

Queens is a first-year member in the Atlantic Sun and picked to finish 13th out of 14 teams. The Royals didn’t play like a Division I newcomer down the stretch.

“Heck of an atmosphere,” Herd coach Dan D’Antoni said. “Homecoming three times over here. They came ready to win. We had a couple of chances to win at the end. We’ve got to find our groove. Played well enough. We’re going to win a bunch of ball games.”

Queens trailed 81-73 with 3:02 left when the Thundering Herd’s Kamdyn Curfman drilled a three-point shot. That would be Marshall’s last basket.

B.J. McLaurin made 1-of-2 free throws for the Royals to start the comeback. Dye’s basket with 2:15 left cut the deficit to 81-76. Jay’Den Turner hit a two with 1:44 to play for Queens to get within three.

With 50 seconds left, Turner drilled one of his team’s 11 threes to tie the game at 81. Then the Herd’s Taevion Kinsey drew a foul with 34 seconds to play and stepped to the line for a one-and-one. He made the first, but missed the second. The Royals got the rebound and called timeout with 30 seconds on the clock.

Queens ran the clock down to 9 seconds and that’s when Dye connected for the eventual game-winning score and an 83-82 lead.

Kinsey and Andrew Taylor got off shots for Marshall before the horn sounded, but missed. Marshall missed its final five shots and made just one of its last eight. The Royals went 4-for-4 down the stretch.

Marshall, in its first year in the Sun Belt Conference, quickly made up the deficit and bolted to an 11-point lead when Wyatt Fricks scored with 10:48 left to make it 69-58. The Herd used 17-3 and 10-0 runs for the double-digit lead, before it was rally time for the Royals.

”We had the right formula. We were getting people to where they can produce,” D’Antoni said.

Dye, the team’s top scorer last year in the final NCAA Division II campaign, led the charge with 24 points to go with 10 assists. Gavin Rains and Turner finished with double-doubles. Rains netted 14 points and grabbed 13 rebounds. Turner had 10 points and 10 boards. Queens also had a 47-36 edge in rebounds.

Kinsey led Marshall with 23 points and 10 rebounds for a double-double. Andrew Taylor had 20 and Curfman 15 on five threes (the Herd had 11). Those three combined for 57 shots and made just 26. Jacob Conner finished with 11.

D’Antoni said Curfman, the transfer from VMI, is going to come around. He struggled from the field in the two exhibition wins.

“The first two exhibitions I was starting to sweat a little bit,” D’Antoni said. “The guy’s going to get more comfortable.”

One disappointment was Obinna Anochili-Killen finishing with just six points, four rebounds and no blocked shots.

Marshall will be off until November 14 when it plays Tennessee Tech in its home opener. Start time at the Cam Henderson Center is 7 p.m.