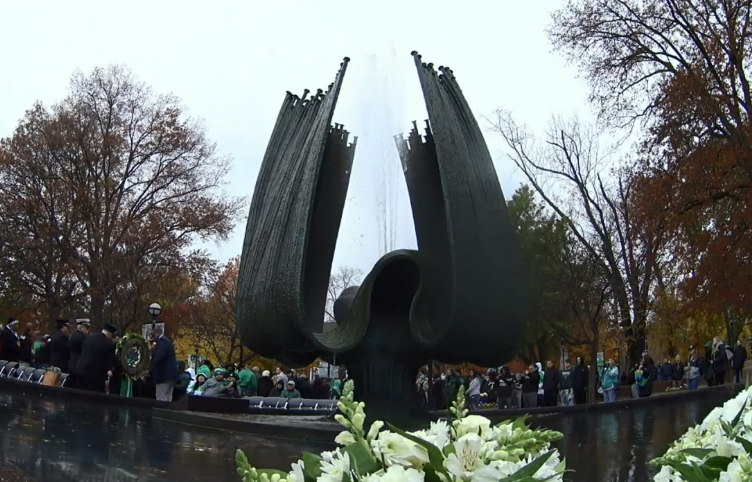 Coach Charles Huff places a wreath in front of the Memorial Fountain in 2021.

HUNTINGTON, W.Va. — Monday marks the anniversary of the worst sports tragedy in American history and a day the Marshall University community will never forget.

On Nov. 14, 1970, Southern Airways Flight 932 carrying 75 Thundering Herd coaches, teammates, staff, supporters and flight crew members crashed into a hillside as it approached Tri-State Airport, killing everyone on board.

On Monday at noon, Carelli will share how the crash made an impact on his life and continues to guide his heart so many years later during the annual Memorial Fountain Ceremony.

“I can’t speak from specific memory and I was too young to know really what was happening at the time, so my perspective is different,” said Carelli in a release. “I don’t have any real memories. The only memory I have is when my mother grabbed me out of bed to watch my father do an interview on the news. I’m very thankful for my mother, grandparents and Huntington friends who have helped me to know my father.”

Marshall University stated that Carelli’s mother, Marti, was instrumental in documenting early memories, as well as the events surrounding the crash for Vince and his younger brother Ron, who was three months old at the time. She wrote a book titled Halftime, which began with a letter written to each of her sons after the crash. The book is also a personal account of her love story with Al, as well as her own story of coping with tragedy and moving on with life.

“My mother always had a ‘glass half full perspective on life,” said Carelli in a release. “She and my grandparents were instrumental in helping me know who my father was. My brother and I would spend four to six weeks of every summer with my grandparents. That was vital, too. They always shared stories of my dad, and compared my brother and me to him often.”

Carelli now lives in Chattanooga, Tennessee, with his wife, Tamra. He works in insurance and the two have one daughter, Lauren, who attends Belmont University in Nashville and is a member of the women’s tennis team.

Members of the public are invited to attend in person or view a livestream of the event, by visiting https://www.marshall.edu/livestream. Media are invited and encouraged to attend.

For more information on the Memorial Fountain Ceremony, to view a virtual plane crash memorial tour or view pictures of those who perished in the crash, visit www.marshall.edu/neverforget.