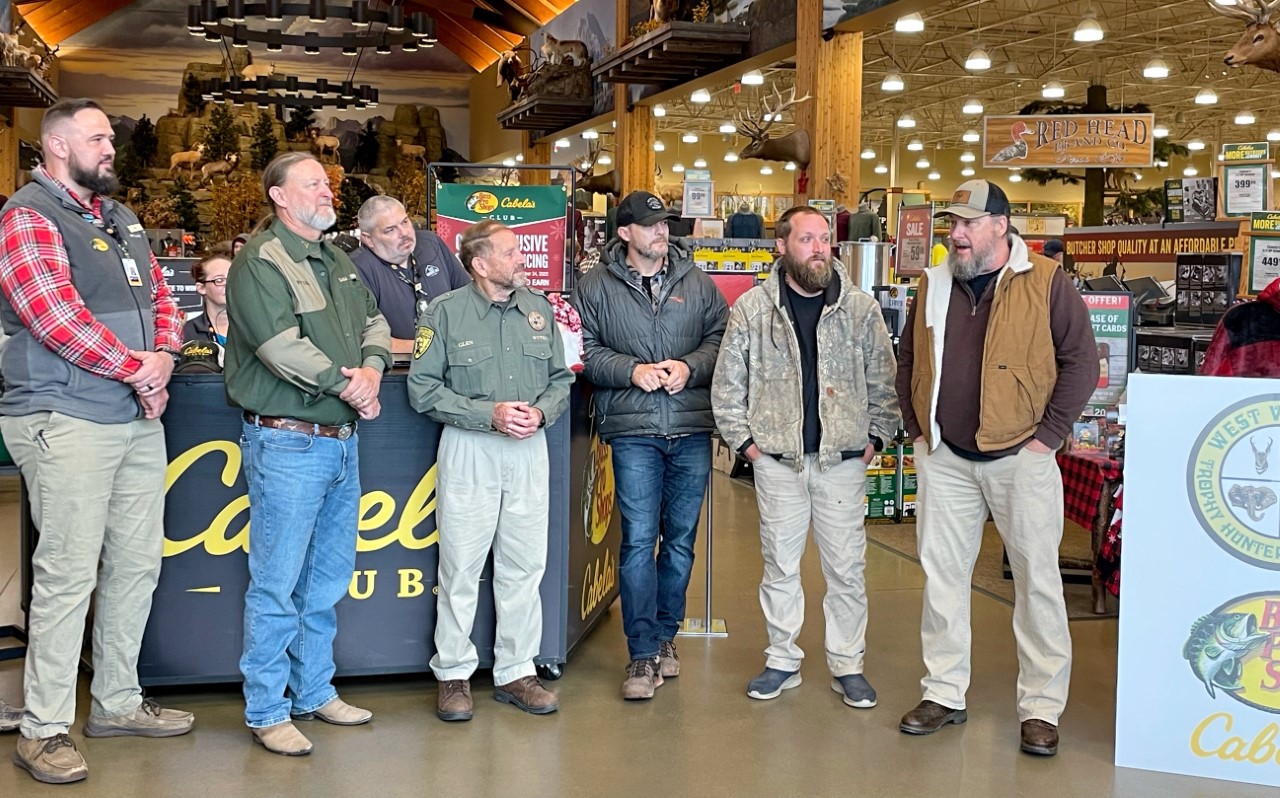 Cabela's and the West Virginia Trophy Hunters Association agree to a partnership to bring big changes to the 2023 W.Va. Hunting and Fishing Show.

CHARLESTON, W.Va. — Organizers with the annual West Virginia Hunting and Fishing Show this week announced big changes for the 2023 event in January.

The West Virginia Trophy Hunters Association has announced a partnership with Cabela’s to bring a whole new look and feel to the event which has been held annually for more than 30 years. The Trophy Hunters Association is a non-profit group and all members are volunteers. Funds raised by the annual show are donated back to organizations which promote wildlife conservation and youth outdoor education programs. From 1995 through 2022 those donations exceeded $1,350,000.

“We are so thrilled to have the support of Cabela’s.  This allows us to revamp, refresh, and reinvigorate our hunting and fishing show.  Great to have so many top notch hunters and fishermen providing education through their seminars.  The support also affords us the opportunity to expand our youth activities,”  said West Virginia Trophy Hunters Association President Sam Kindrick.

“West Virginia Trophy Hunters is such a big part of the community and outdoors in West Virginia. I strongly feel it’s just a great opportunity to be involved and have a partnership with them on this project. What they do for the community is just amazing in encouraging men ,women and children getting into the outdoors. Their values match with ours and what we’re all about as far as conservation, youth education, and advocacy. So we’re super excited to take part and have representation of Cabela’s at this year’s hunting and fishing show.” said Neil Depugh, General Manager of Cabela’s Charleston.

The partnership and new plans for the show were announced during a Wednesday press conference at the Cabela’s store in Charleston.

“Change can be good and we figured the time had come to give the show a fresh look after many years. Bringing Cabela’s on board as our top sponsor is a great way to showcase their brand and will be a big boost to our annual show,”  said Glen Jarrell  with the Trophy Hunters Association.

The show’s primary focus is to give West Virginia’s sportsmen and women an opportunity to connect with goods and services for hunting and fishing from around the globe. Vendors will continue to be the largest part of the event, including hunting and fishing outfitters from Alaska, the western United States, Canada, and Africa.

As part of the partnership with Cabela’s a show stage will be established as the centerpiece of the grand hall at the Charleston Coliseum and Convention Center. The stage will host an increased number of events including a lineup of known names conducting hunting and fishing seminars throughout the weekend, media events, and the annual charity auction.

· Randy Kelly with the WV DNR – Elk Status in WV

· Rob Ciarapica, Professional Fisherman – The Ethics of the Fishing Tournament

· Miss West Virginia, Chelsi Rose, who was crowned Miss for America Strong – an avid outdoors advocate, she is provided a discussion on ‘Women in the Outdoors’

· Josh White, a Racecar Driver will be aligned with Laurel Fork Outdoors to promote Tactacam

· A Cabela’s Fashion Show to feature apparel for men, women, boys and girls.

· Videos will play while no seminar on the Cabela’s Stage, so there will be activity the entire time of the hunting & fishing show

West Virginia Outdoors and a special three hour edition of the show heard on flagship station 580WCHS Radio will also originate from the show stage during the weekend.

New events for the 2023 include a youth challenge,  youth survival training, and a Boy Scout event.

Outdoors
Charges dropped in McDowell County poaching investigation
David Craft, formerly of Statesville, N.C. fought allegations he illegally killed a deer in McDowell County until the case was finally dismissed earlier this year
By Chris Lawrence
Outdoors
Logan County hunter kills an oldie
It's rare for any buck in West Virginia to outlive his physical potential, but the buck killed by Bucky Sargent of Logan in November 2022 led quite a life to the very end.
By Chris Lawrence
Outdoors
Singer Donnie Davisson finally bags the Big 8
Half of the country music duo The Davisson Brothers shares the story of hunting a big buck on his family farm in Harrison County
By Chris Lawrence
Outdoors
West Virginia hunters ready for another buck season
It's a season built as much on tradition, friendship, and Mountain State heritage as it is on the pursuit of whitetail deer.
By Chris Lawrence