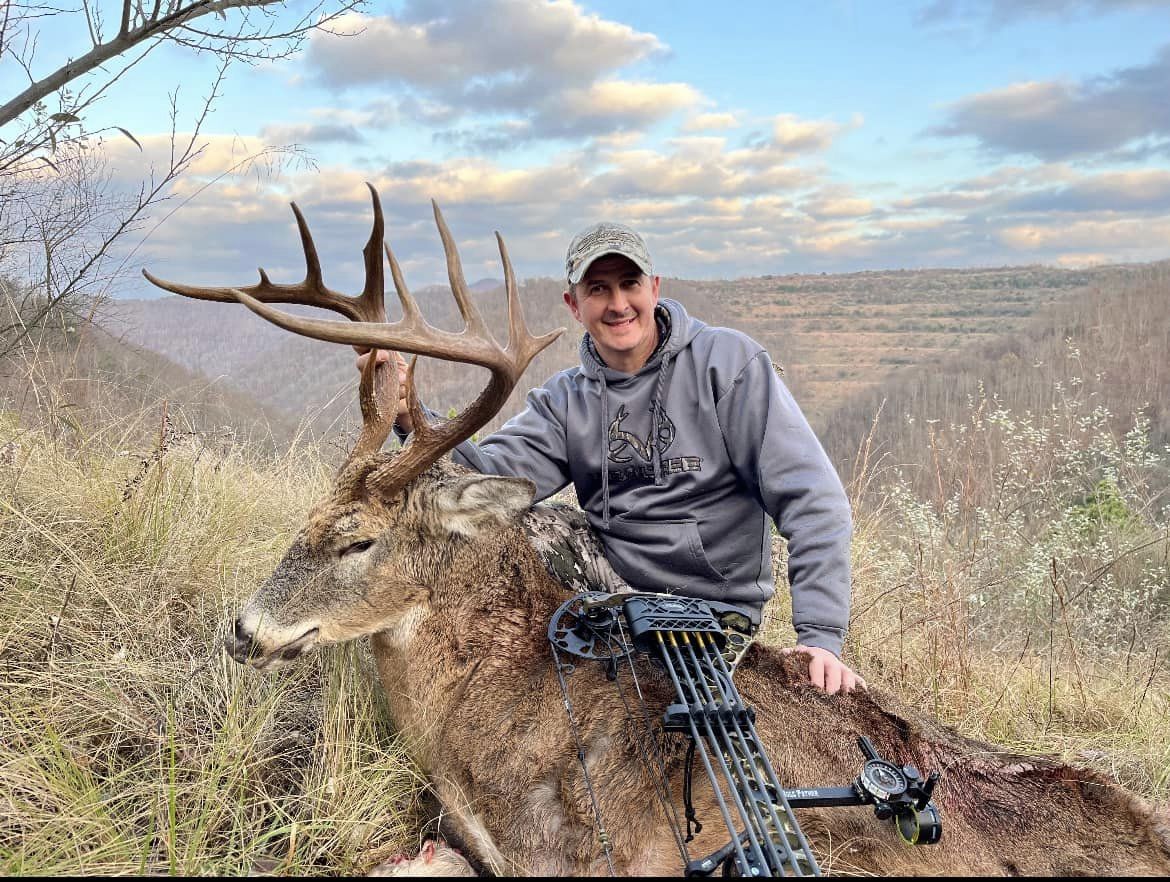 Bucky Sargent of Logan, W.Va. with the buck estimated to be around 10 years old killed at the height of the 2022 rut.

LOGAN, W.Va. — Bucky Sargent of Logan is no stranger to the challenges of hunting big bucks. Through the years, Sargent has managed to take a number of Pope and Young record book deer in the archery only counties, but this year’s quest was likely one of the oldest deer he’s ever killed.

It’s typical for trophy bucks in this part of West Virginia to reach 6 or 7 years of age, realizing the full potential of their physical traits.  Somehow, Sargent’s 2022 buck managed to last at least a decade in the rugged and steep hills of Logan County.

In early November, at the height of the rut, Sargent got the opportunity to kill the massive deer which he had been following for several years. He wasn’t alone in the quest. The elusive monster had humbled a number of southern West Virginia’s most accomplished hunters through the years.

“He was definitely a horse. We think he was about 10 years old, judging from the sheds we had of him and pictures different people had of him on trail camera,” said Sargent in an interview for West Virginia Outdoors.

One of Sargent’s close friends shot the buck two years ago. However, the wily critter proved he was tough to tag.

“He didn’t hit him real good and we tracked him for a long time, but we never could find him. He shot him in November, but way up in January, I ended up finding one of his sheds and knew he made it,” Sargent said.

That same year, Sargent killed another buck. This year, Sargent had another buck as his top prospect to hunt, but it was killed early in the season by another hunter. The situation caused him to give this buck, which really had no nickname, another look.

“I was kind of struggling and didn’t really have any shooters lined up. This one started showing up on camera. I was debating and a couple of my buddies said I ought to try and get him,” he explained.

Sargent made the decision to hunt the old buck, who he knew was well passed his prime.

He climbed into his stand on a cold November morning and spotted a piebald doe nearby who was clearly in estrus. Her tail was flicking and she was giving all of the signals of being ready to breed. Soon, a small buck was nearby and chasing her around. Sargent observed the action from his lofty perch. In a half-hour or more another, slightly larger buck moved into the area and also began to make his bid for the opportunity .

“I was on a real pretty flat and they all came running by me. One buck went left, and the little eight-point took the piebald doe back the way she came,” he said.

He’d been observing the ritual for more than two hours and admitted his toes were starting to get cold and he was considering giving it up for the day. However, things quickly changed.

“The little buck came running back out of there with his tail between his legs. I kept watching because I knew there had to be a big buck for him to come running out of there like that,” Sargent explained.

Soon, the piebald doe came trotting into view from the same area. As she passed Sargent’s stand he could tell the unmistakable sound of the deep, low grunt of a dominant buck.

“He was walking just a little ways behind her, but he was real cautious. He walked within 12 yards of my tree, but I didn’t have a shot because it was really thick in there and he wasn’t near a shooting lane,” he said.

Sargent held at full draw and was waiting for the right moment. The doe broke and ran, causing the buck to break as well. When he did, Sargent let the arrow fly and was concerned since it struck further back on the deer than he had wanted. Still, he had confidence in his equipment and believed it would be enough to do the job as the huge buck disappeared over the mountain side.

He got on the phone and assembled some buddies who began the tracking job.  They eventually caught up with the old, massive buck several hours later.  He had moved and stopped three times and finally expired about 300 yards from where he had been shot.

Sargent admitted the buck was on the downhill slide, but it didn’t diminish the thrill of the hunt.

“He was real nice two years ago when my buddy shot him. He was old and going downhill and he really needed to be taken out of the herd, but I still enjoyed it,” he said.