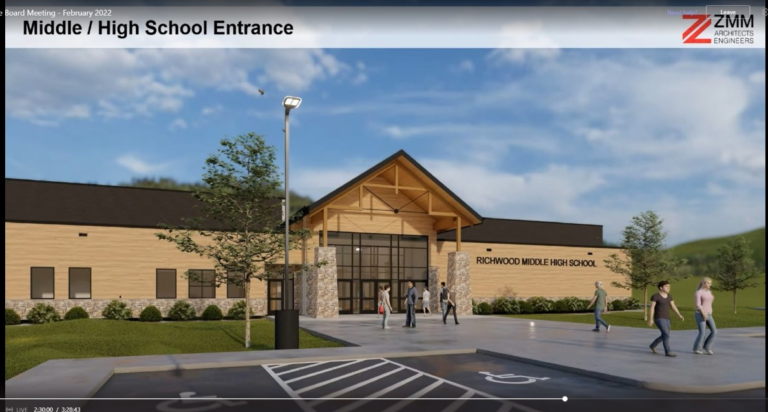 The drawing of the future Richwood Middle/High School.

SUMMERSVILLE, W.Va. — The Nicholas County Board of Education has approved a bid to build new schools in Richwood more than six years after the June 2016 flood.

The approval of a $42.5 million bid came on a unanimous vote Monday night.

Richwood High School students have been attending classes in portable buildings in Craigsville since the fall of 2016. The bid approved Monday will pay for the construction of a K-12 complex that will renovate Cherry River Elementary School in Richwood and add facilities for middle and high school students on the same property.

The project had to be redrawn and then rebid because of how inflation has driven up the costs. The actual ceremonial groundbreaking for the project was held in June 2020 but there have been a lot delays since then including the pandemic.

The federal government through FEMA is paying for most of the project. Perrine said that’s great but it also comes with additional bureaucracy that has slowed down the project.

“A lot of people don’t understand the whole process with FEMA but if you look across the nation with FEMA schools it’s usually 9 to 10 years before they get them built,” Perrine said.

St. Albans-based SQP Construction Group hopes to have the project done by March 2025 which would be a few months shy of the ninth anniversary of the 2016 flood.

Perrine said the plans will next go to the West Virginia School Building Authority and then hopefully out to bid.

Money issues have caused the plans to be scaled back to the minimum required for new schools by the state Department of Education. Perrine said he doesn’t think the county will have enough left from the originally $177 million allocation from FEMA to finish the Glade Creek projects once the $42.5 million spent on the Richwood project.

“I’m pretty confident though that we’re going to need more money….no one could see the inflation and the way it’s hit us here in the last couple of years,” Perrine said.

Most of the current school construction projects across the state are coming in about 40% above the original projected cost, Perrine said.

“All we can do is set back and wait to see if that happens and then see what we can do about it,” Perrine said.

They’ll be no more money from FEMA. Nicholas County opted for what is called Section 428 when it made its agreement with the federal government for school funding. That path does not supply additional funds beyond the original allocation.

Perrine said the process hasn’t been perfect but at least some dirt should be flying for new schools in Richwood in a matter of weeks.

“We hope we’re moving in the right direction. We’re a little bit worried about the money but we’re excited about the projects and at least get one of them started,” Perrine said.