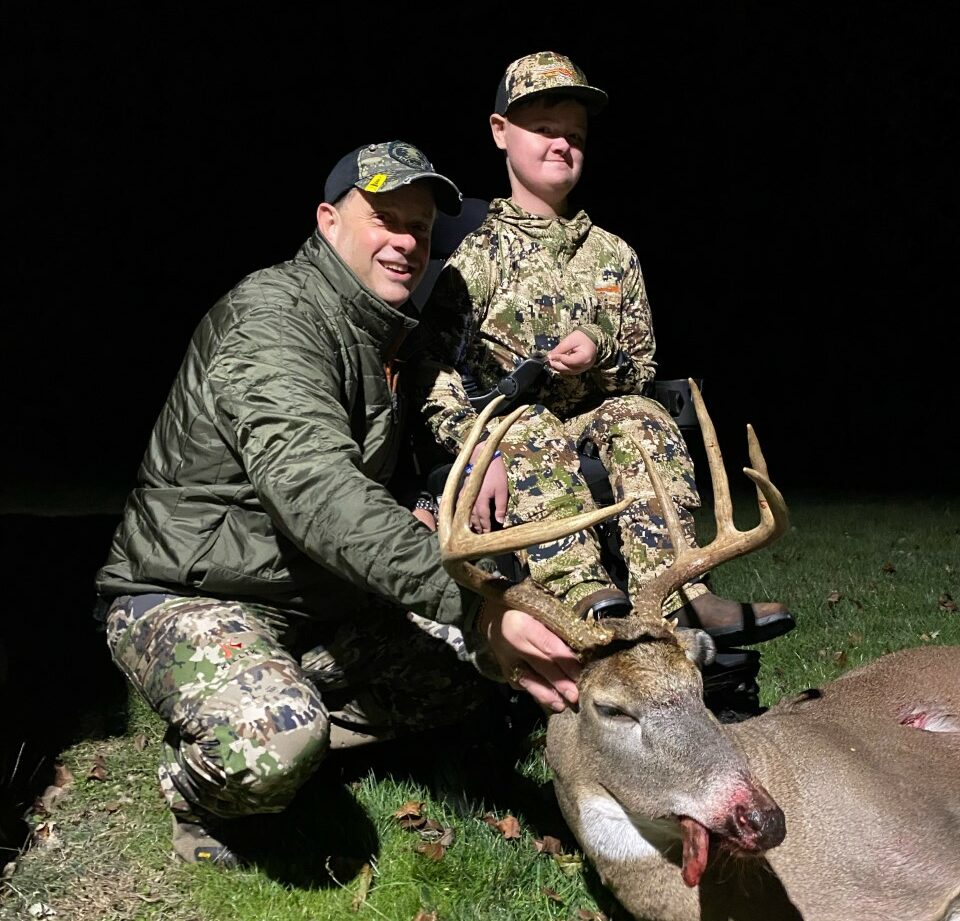 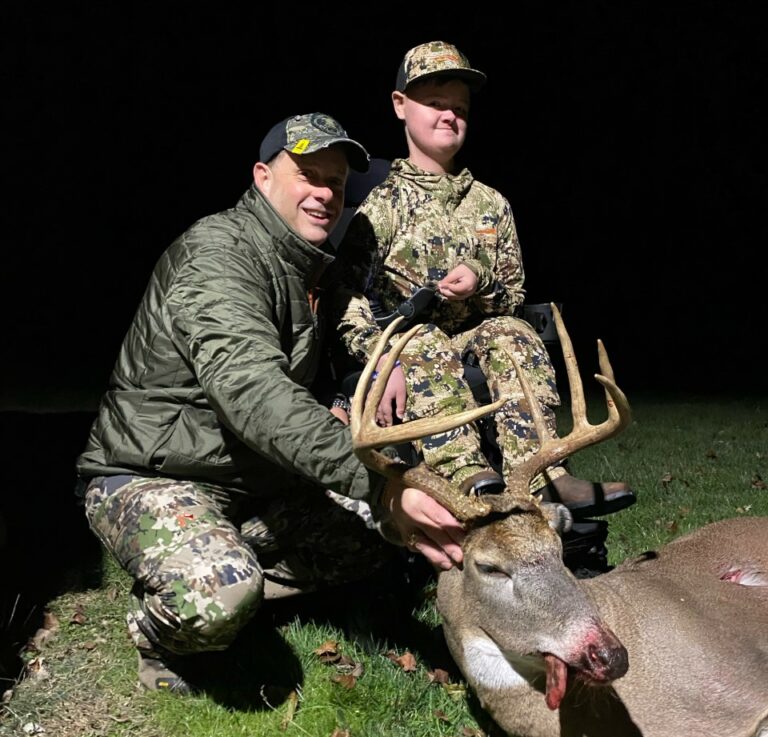 John Eary and his son Lake with Lake's massive 8 point buck killed during the 2022 gun season. 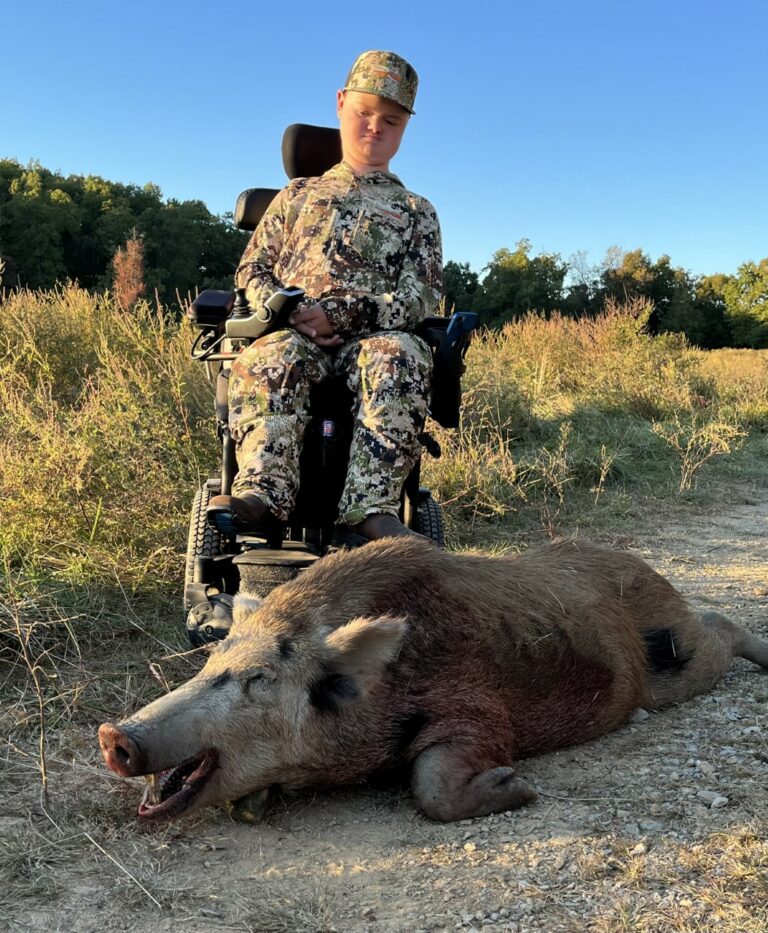 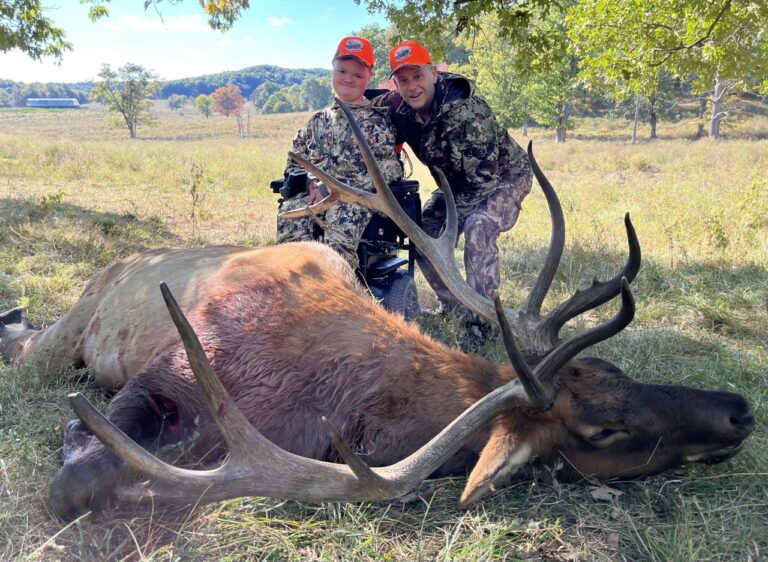 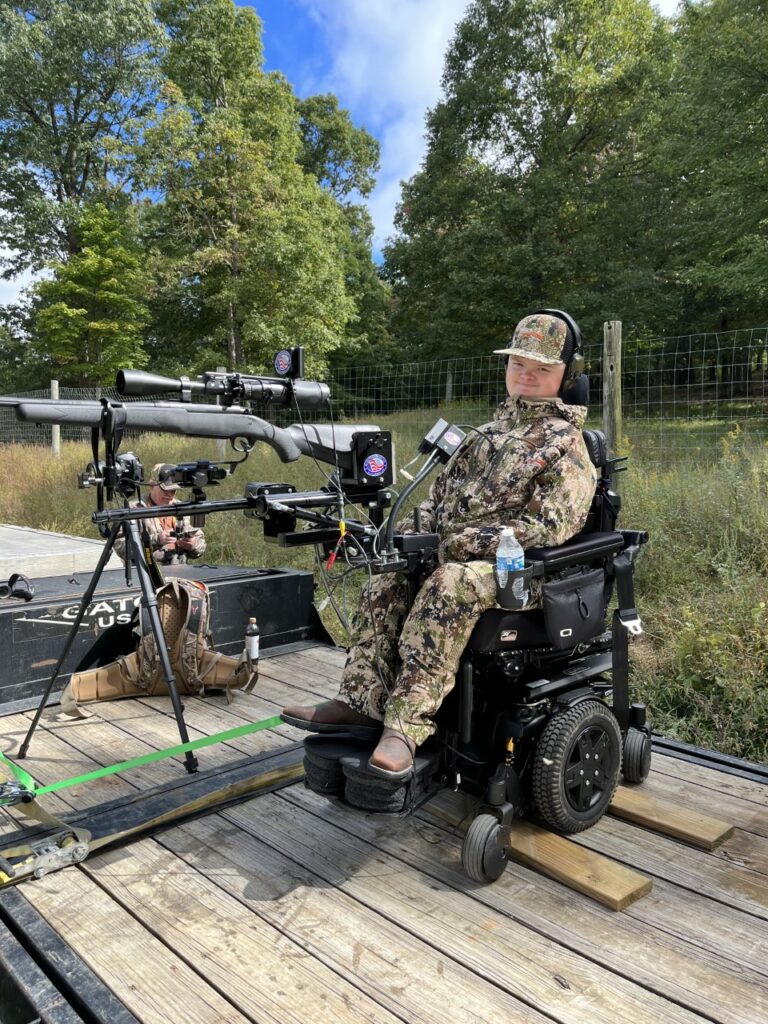 Lake with the device which enables him to use a rifle or crossbow for hunting. 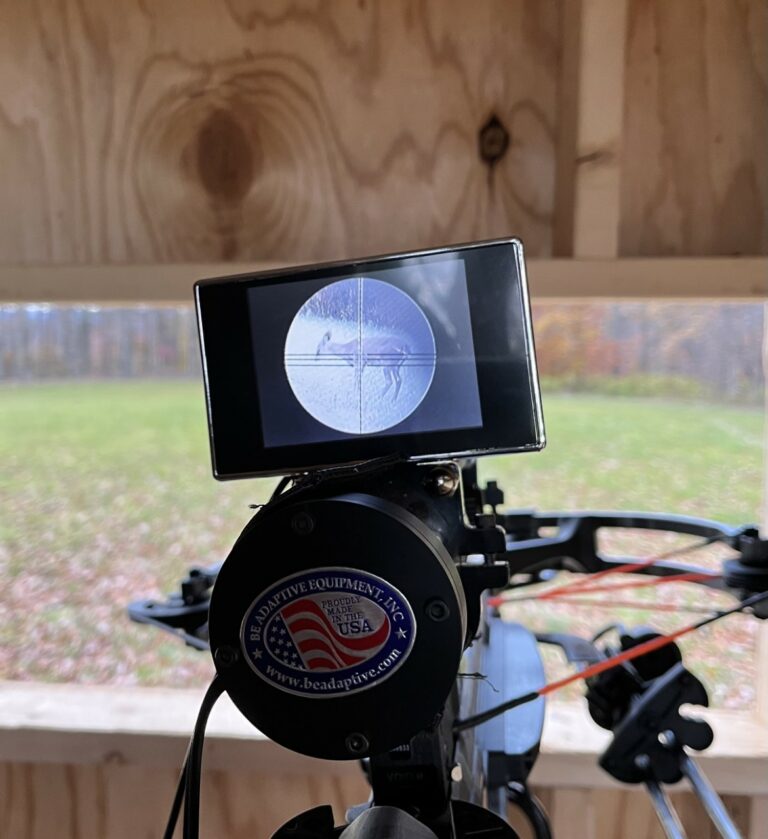 Lake suffers from spinal muscular atrophy which makes it impossible to shoot without an aid. This is the device which helps him site in his game.

CRAIGSVILLE, W.Va. — There aren’t many hunters who can claim to have killed an eight point buck, a Russian boar, and a 360 class bull elk all in the span of one hunting season, but young John “Lake” Eary of Nicholas County can make that claim.

The truth is, there aren’t many hunters like Lake, who through his zest for life has inspired many.

Lake suffers from a rare disorder known as spinal muscular atrophy. The illness renders his muscle function almost nill.  He has almost no mobility in his body. But, what he lacks in physical stature, he more than makes up for in determination and grit.

“It’s amazing how many lives he’s touched,” John explained. “People are always telling me when they feel tired or they’re having a bad day, they just think about Lakey and they are motivated to move on.”

During a friend’s birthday party a couple of years back, the stepdad of one of Lake’s buddies had a device which his father had used to help him shoot despite a disability.  He offered Lake an opportunity to use it. According to John, the device wasn’t quite what Lake needed, but it was enough.

“I like to hunt and I’m a fly fisherman, but he’d only started talking about hunting mostly because his buddies did. This guy had this piece of equipment his dad had used that held the gun. He asked Lake if he’d like to go hunting,” John explained.

The guy and some friends took Lake hunting that fall and got him a shot at a doe. He killed the doe and that first experience was all it took.

“He was hooked,” laughed John.

A year later, hunting out of a blind he missed a deer because the collapsible ground blind wasn’t the best set up.  John built him a permanent, fixed shooting house with for the 2022 hunting season. But before that could happen, Lake and John met Dale Brown of Morgantown at an event at the Summersville Armory. Dale is with the Hunt of a Lifetime Foundation and managed to get Lake in on a hunt in Tennessee this past October. During the adventure he killed the massive elk and a wild boar.

Back in West Virginia, Lake knew there was one buck he wanted. He’d missed it a year earlier and had seen him on several occasions since.

“He bought a trail camera that sends pictures to your cell phone. We were sitting there one night and he said, ‘come here.’ I went in there and he had a picture of this buck on his trail camera,” said John.

Lake announced it would be the buck he would hunt for 2022. He had an encounter with the buck the Saturday before buck season while hunting from his stand with a crossbow. But the buck was too far away and in the wrong place for Lake to get a shot.  John added Lake had passed up several smaller bucks waiting on the big one.

Opening day of rifle season the two set up in the shooting house in the afternoon and were immediately surrounded by does. John explained he moved too much and spooked the does, prompting Lake to tease him that he had spoiled the evening hunt. He couldn’t have been more wrong.

“About that time that buck stepped out of the woods and I said, ‘Oh yeah, how about that?'” he laughed.

“The amazing thing is the times we had seen that deer he went up the ridge to our left. That meant he couldn’t shoot it because he’d have to move his chair, which would probably scare it. This time, the deer walked right in front of him,” John explained.

Lake lined up his shot on his buck using the device and fired. The buck took off running, but he was humped up giving John confidence he hadn’t missed. But, as the deer disappeared it left them both in a tight spot.

“Here I am down here with him. My wife’s at work she can’t help, my dad is elderly and he couldn’t help. I asked Lake if he’d be okay if I left him there alone. He said, ‘Well yeah!'”

John walked to the edge of the woods were the buck was last seen. There was no blood, but as he looked over the hill he could see the deer lying dead at the bottom of the hill.

With the help of some close friends, they were able to recover Lake’s buck and take it back to the shooting house to show him. It was another emotional moment for John.

“When we were at that lodge down in Tennessee, one of the guides asked if I was going to shoot anything. I told him, ‘Man, I could never get as much joy out of shooting something as I get out of watching him shoot something,” said John. “It’s the greatest thing I’ve ever been involved in. It was amazing.”