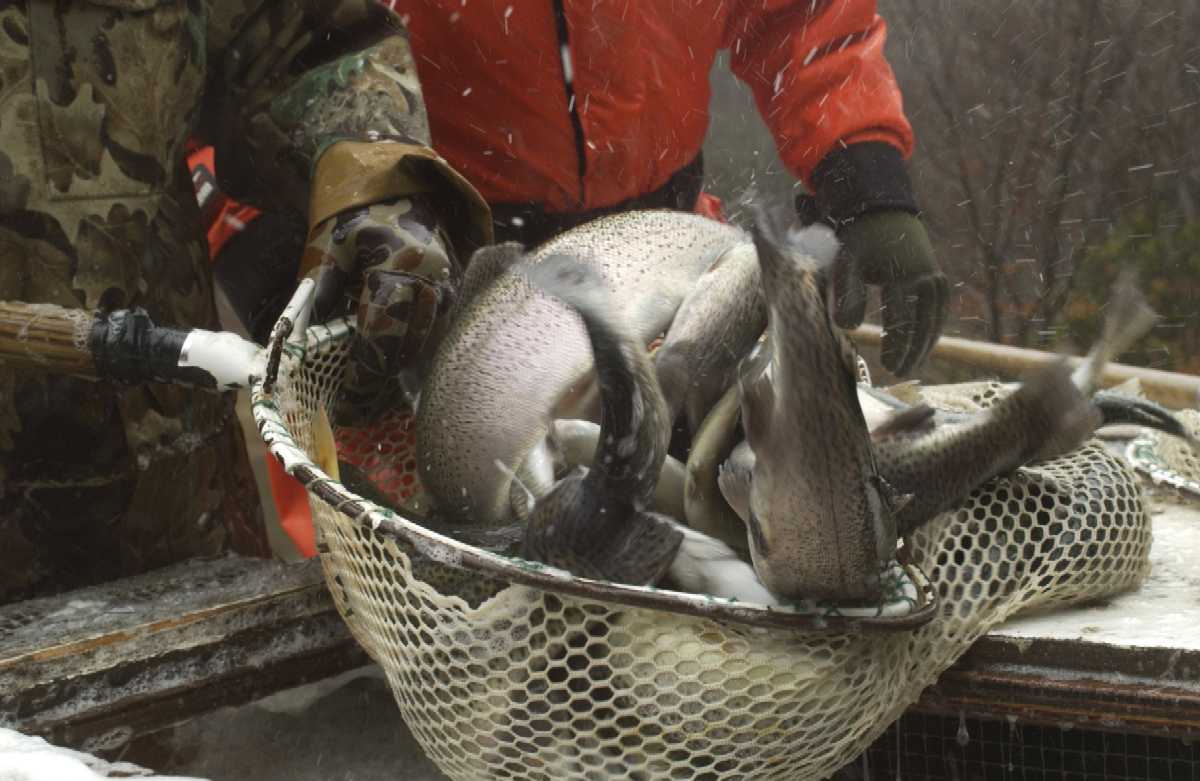 A netful of trout on their way to a lake or river near you in West Virginia from a DNR hatchery.

ELKINS, W.Va. — Despite the cold temperatures and snowy weather, hatchery personnel from the West Virginia Division of Natural Resources have been busy ever since the first of the year distributing trout across the state. Some early warm weather in January was a huge boost to what is normally a difficult set of circumstances.

“Our hatchery managers know their runs well and their limitations. If we have good weather they will schedule those runs off the beaten path like Spruce Knob Lake, Williams River, and the Cranberry that can be often hard to get to and they try to get those stocked early,” said Jim Hedrick, the West Virginia DNR’s Manager of Hatchery Programs.

Those high mountain streams and Spruce Knob have already received at least one stocking for 2023, which typically has to be delayed because of the inclement weather. But with only a few warm days early in the season, the fish were delivered and then whatever weather happens will happen, but the fish will be there when the region becomes more accessible in the spring time.

“Yeah, many of those fish will still be there at the end of May. The winter adventure isn’t for everybody and just like it’s hard for our personnel to get there to stock, it’s hard for fishermen to get there and fish. So, water temperature isn’t a problem and they’ll get naturalized a little bit before they get much fishing pressure,” Hedrick said.

The cold water conditions are also the time of year when the agency is able to extend the trout program to other parts of the state where typically it’s just too warm to support trout.

“This time of year in West Virginia, with respect to temperature, everything is trout water. So there’s no problem with them surviving in those western impoundments. We stock those early in the year to give anglers an opportunity to catch those and extend the trout fishing season for as long as we can,” he said.

The waters include spots like Krodel Lake in Mason County or Hurricane Reservoir in Putnam County. Typically, those would not hold trout after mid-March, but now instead of anglers having to travel to the trout, the DNR can let the trout travel to the people.

“Unfortunately it’s not really trout water but the positive is it is a community fishing area. It allows us to bring trout to an area where there a lot of people. Kids can ride their bikes there and don’t have to depend on an adult to go fishing,” he said.

The early stockings generally run through January, February, and part of March. The weekly waters in West Virginia’s mountain areas and the traditional trout streams start receiving weekly stockings through the end of May.

Outdoors
French Creek Freddie says early spring
An overcast day at the West Virginia Wildlife Center in Upshur County offered no shadows to West Virginia's official groundhog.
By Chris Lawrence
Outdoors
Logan County hunter wins January prize pack form Hoodoo Sports
A picture featuring a variety of waterfowl after a day of hunting on the Guyandotte River was randomly selected by the computer as the January winner of the Hoodoo Sports Trophy Photo Contest
By MetroNews Staff
Outdoors
Boone County native completes Antarctica voyge
Boone County native completes an adventure so unusual most have probably never even thought about doing it.
By Chris Lawrence
Outdoors
Annual West Virginia Hunting and Fishing Show set for this weekend
The 2023 show will feature modifications to make seminars and stage demonstrations a larger part of the annual gathering.
By Chris Lawrence