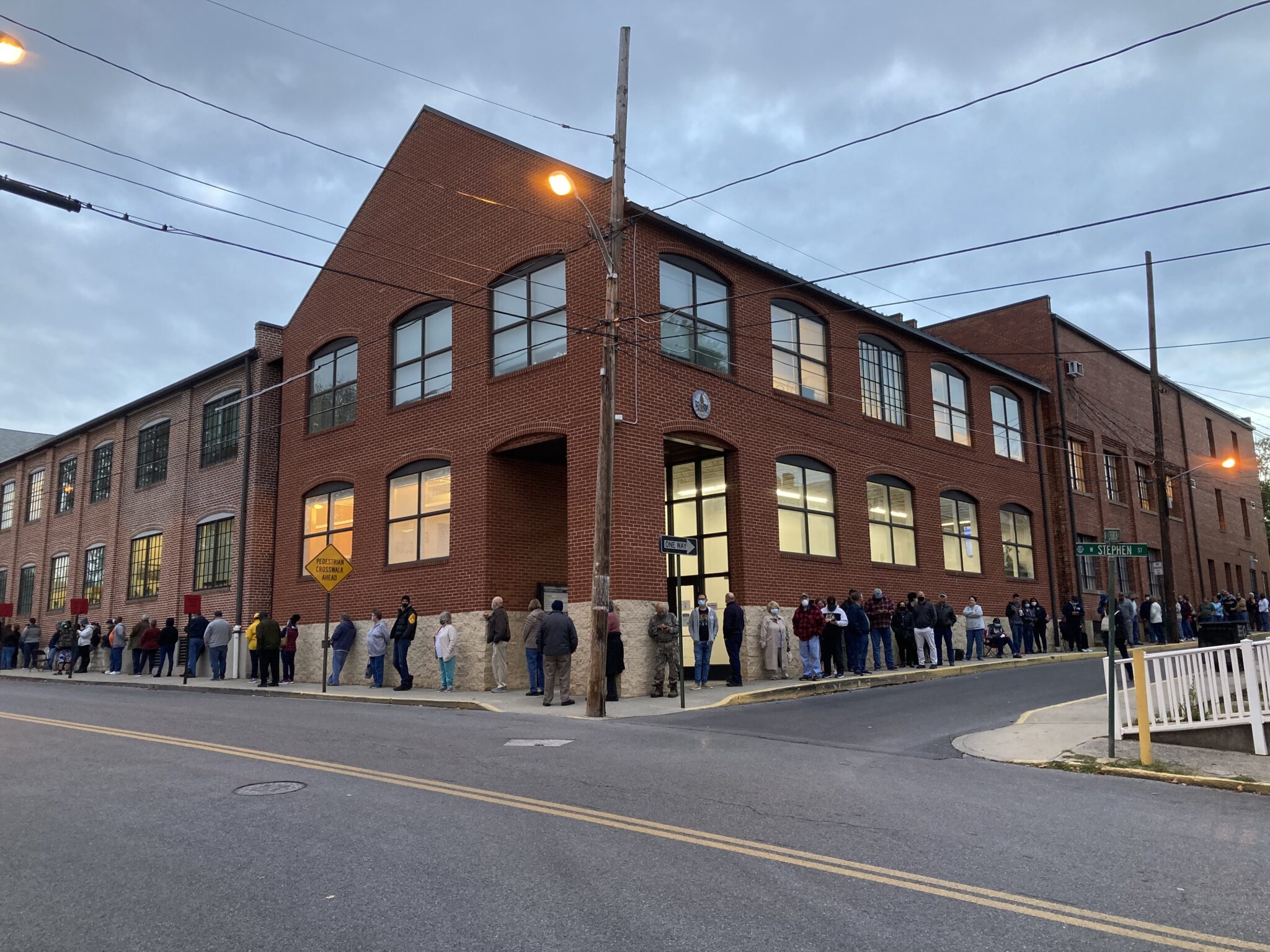 A line forms for early voting at the voter registration office on West Stephen Street in Martinsburg.

One week before Election Day, early and absentee voting continues at an unusually brisk pace in West Virginia.

The Secretary of State’s Office this morning said 126,147 votes have been cast in-person since the start of early voting last Wednesday.

Another 114,059 absentee ballots had been cast as of this morning.

So between the two voting methods, 240,206 West Virginia voters have cast ballots for the election.

“We’re seeing a high level of energy from the voters,” Chuck Flannery, chief of staff for the Secretary of State’s Office, said today on MetroNews’ “Talkline.”

The turnout makes for 18.9 percent turnout in West Virginia so far.

“We really do see this election as being a high water mark for absentee and early voting that I’m not sure will ever be eclipsed again because of the high energy,” Flannery said.

Although some people described lengthy waits on the first day of early voting, Flannery said county clerks around West Virginia now estimate wait times at more like 15 minutes to half an hour.

In Berkeley County, in the Eastern Panhandle, clerks have been processing one voter every 25 seconds by using two lines with 15 machines running.

There is usually an early morning surge, Berkeley County officials said, with a wait time of about an hour and a half, but that tapers off as the day progresses.

By close of business Monday, the clerk’s office there had processed 11.400 early and absentee ballots out of about 83,000 registered, eligible voters.

“We expect today to be busy as well,” Shull said, suggesting people bring an umbrella later in the week because of rain in the forecast.

Voter turnout has been brisk across the country during the heated presidential race between President Donald Trump, a Republican, and former Vice President Joe Biden, a Democrat.

By the end of Monday’s voting, Americans have already cast a record-breaking 66 million early ballots.

That’s about 19 million more pre-election votes than were cast in the 2016 election.

Right now, it’s too soon to say whether that historic pace will continue through Election Day, said Erik Herron, the Eberly Family professor of political science at West Virginia University.

The question is whether heavy turnout continues all the way through Election Day — or if it’s a shift of people’s habits due in part to the coronavirus pandemic.

“What we don’t know is if this is indicative of an overall voting increase or if people are just voting differently,” Herron said.

“We don’t have great data at this point to be clear on what’s exactly going on. There are hints here and there that maybe this is higher turnout.”

Traditional voter turnout in West Virginia is about 50 percent or fewer of registered voters.

Factors that go into deciding whether to vote include whether people perceive their effort will matter, how hard or easy it is to make the effort and a belief in civic duty, Herron said.

“Right now we’re looking pretty solid, and I’m just very interested that we’ve had more than a third that already voted versus the average we’ve had in the last several elections,” Beller said.

“You’ve got a public that’s interested and definitely wants to have their vote counted.”

She took the overall vote so far and broke it down by congressional district.

District 1, representing West Virginia’s northern counties, was in line with the state average with 18.1 percent turnout so far.

District 2, the middle slice of the state, was a little higher with 19.71 percent. That’s where a congressional matchup between incumbent Alex Mooney, a Republican, and Cathy Kunkel, a Democrat, is taking place.

“I wonder if we’re seeing a big surge of get out the vote with respect to the district seat,” Beller said.

And then District 3, southern counties, had a little lower turnout so far at 16.24 percent.

In West Virginia, Tuesday is the last day to request an absentee ballot. The Secretary of State’s Office suggests using the state’s electronic portal to expedite the request at this point.

The last day of early voting is this Saturday, Oct. 31, with polls closing at 5 p.m.

“My message to you is, if you want to be a part of this election, you’ve got one week to decide how you’re going to vote, pick one of those options and then execute,” Warner said.