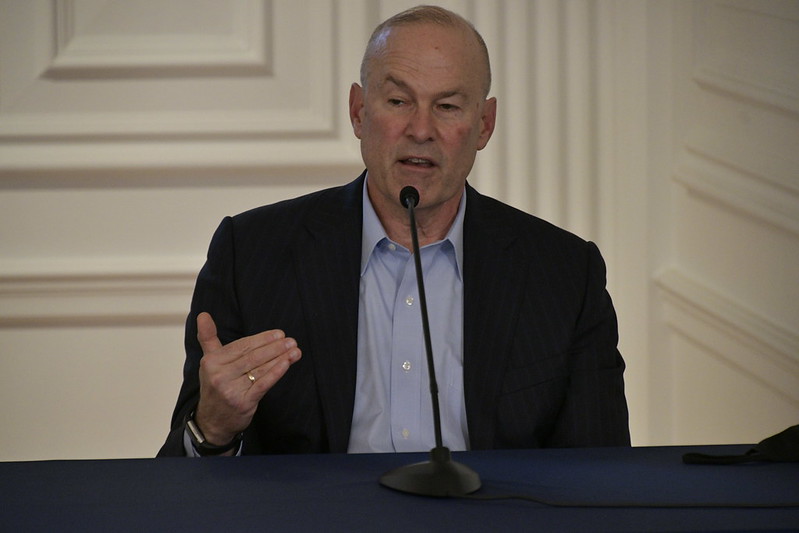 “It is really the time today to take maximum effort to focus on getting tested, to wear your mask, to stay physically distant,” Marsh said during a regular briefing.

The seven-day rolling average of new coronavirus cases in the United States passed 70,000 Tuesday, more than previous records set at the height of the pandemic’s first wave.

Across the country, 29 states have reported record numbers of infections in the past week. About 43,000 people are hospitalized, a figure near the worst of the midsummer peak.

West Virginia recorded 358 new cases in the past 24 hours, and the percent positive was 4.29 percent — “too high,” Justice said.

Marsh described a two to four week lag between new cases and demand for hospital beds.

Hospitalizations in West Virginia hit 226, a record, but state officials said it’s not yet at capacity. Cases in the intensive care unit numbered 83, also a record.

“We do see a very early increase in the use of hospital beds,” Marsh said.

But he said West Virginia hospitals are not overwhelmed right now.

“We certainly do have bed capacity and we’re not being overwhelmed by patients at this time,” Marsh said.

“When I talk to colleagues in Charleston and Huntington we’re starting to see those same upticks in our WVU Medicine hospitals in the northern part of the state,” Wright said. “But, it’s still very manageable.”

Wright serves as the chairman of the West Virginia Hospital Association board. As this surge unfolds, he ha spent some of his time working behind the scenes to make sure hospitals have the staff and equipment to manage their patient load.

“Coordinating calls with hospitals to make sure we’re sharing resources and ideas and equipment and even personnel at times,” Wright said. “We’re keeping an eye on it, but it’s a little more concerning than it has been.”

Albert Wright, @WVUMedicine President and CEO, joins @HoppyKercheval to discuss the latest COVID-19 numbers in West Virginia, and an overall perspective of the virus across the state. WATCH: https://t.co/wkudfIRZCB pic.twitter.com/xn85LOcwYl

The details behind the numbers is what has the attention of healthcare professionals.

According to the DHHR seven-day trend, 719 of the 2,310 active cases in the state — or 31 percent  — are in people 60-years-old and above. Three-hundred and seventy of those infected are 70 or older.

“If we ever needed to create immediate capacity we could do that by slowing down some elective procedures,” Wright said. “We’ve not had to do that yet, but I think your bigger more tertiary centers around the state are prepared to do that if we need to.”