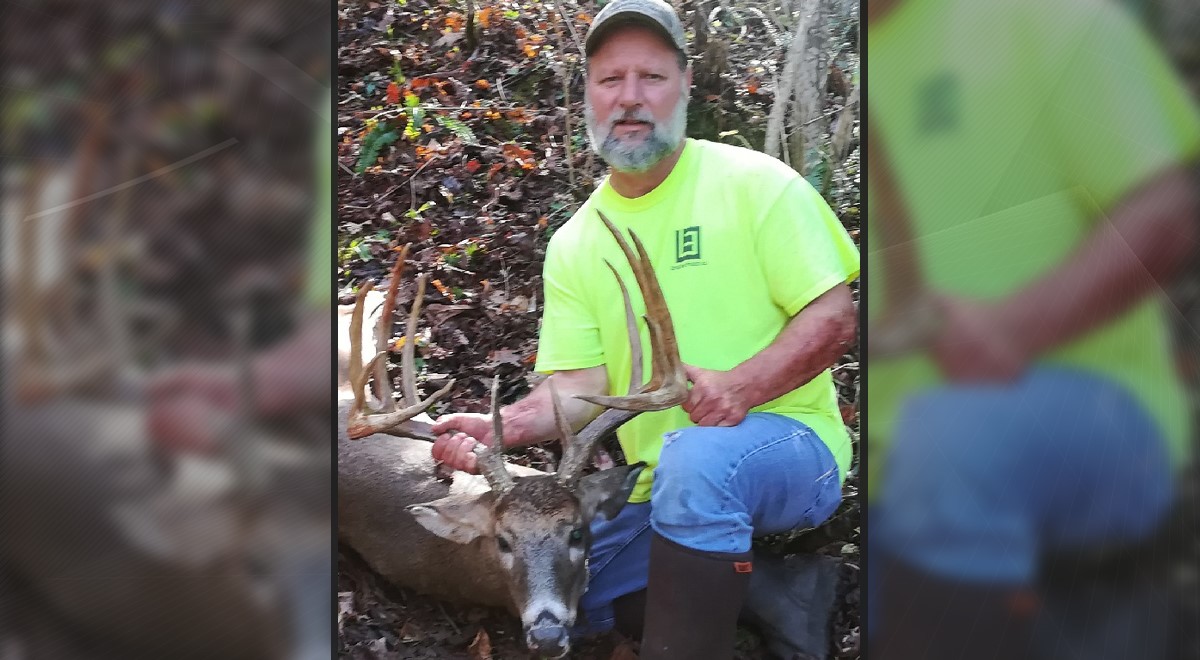 Jody Dalton of Princeton, W.Va. with the massive 12 point buck he killed this week in Wyoming County

PRINCETON, W.Va. — The standing record for the largest whitetail killed with a bow in West Virginia, in the typical antler category, could be in jeopardy with a buck taken last week in Wyoming County.

Soon after Jody Dalton and a friend recovered the massive 12 point buck and the pictures hit social media, it was the buzz of the internet among outdoorsmen. A funny note, the most shared picture of the big buck isn’t even Jody holding the deer. It’s one of his buddies. Dalton, who is from Princeton, West Virginia laughed about that in a conversation on West Virginia Outdoors. He knew it was a special deer regardless of who was holding the rack.

“When I first laid eyes on him I said to myself, ‘Oh my God, this could be a state record.'” he explained in the radio interview.

It could be. But we’ll have to wait just under a couple of months to know for certain. An official Pope and Young score requires the rack to have dried for at least 60 days. During that period, the size of the antlers will often shrink at least a little. Sometimes that will be the difference. The current record for a typical whitetail taken with a bow was 188 7/8 killed in 2014 in McDowell County. You can see the full list of the state’s largest bucks here.

Listen to “Jody Dalton on W.Va. Outdoors” on Spreaker.

Normally when hunters in West Virginia’s four bow-hunting only counties kill a big buck like this one it’s the culmination of an often years long pursuit with a lot of near miss encounters, heart stopping and at times heart breaking moments. Compared to most stories, Dalton’s tale is pretty tame.

“I had a picture of him back on the 26th of October and I knew he was in there. It just so happened he came through at 10 in the morning chasing two does and gave me a 30 yard broadside shot,” Dalton laughed.

That’s right. No years of near misses. No trail cam pictures documenting the buck’s life for the last five years. Just a single picture and being in the right place at the right time. Dalton always hunts the second week of November, but thought he would give this area a try early. He had hunted the spot in Wyoming County last year for the first time and had a single picture on his trail camera from 2019 which may or may not have been the same buck.

“I’m not sure if it was the same buck, but I think it was. But I knew that buck was in there and that’s the reason I snuck in there. I don’t go in until November so I don’t go in there and mess around in the early part of the season,” he said.

It’s not Dalton’s first rodeo. He works for a mining supply company and has worked his way to a management position which gives him the extra time to be in the woods. He has pursued big bucks in the southern coalfields for many years. He’s taken some record book bucks before, but none compared to this one.

“He came in and saw the two does and started chasing them. When I first laid eyes on him at 40 yards I was like, ‘Oh my God, it’s him.’ I had to calm my nerves, but like I said he gave me a 30 yard broadside shot and I made the best of it.”

The deer ran about 150 to 200 yards. Dalton gave him an hour before he started to track the blood. He soon realize that wasn’t enough time.

“I started tracking and I jumped him and my heart sank. So I went back to my side-by-side and went back to my Dad’s which was a half hour ride. I didn’t want to jump him any more,” he said.

He and his dad and a buddy returned to the last known location of the buck and found him another 50 yards away, dead.

The deer is at the taxidermist and an official scorer has been notified. All that’s left to do now is wait for the mandatory drying period to expire to see if it’s the new record.

“It might be, then again it may not be, and that’s fine too.” laughed Dalton.