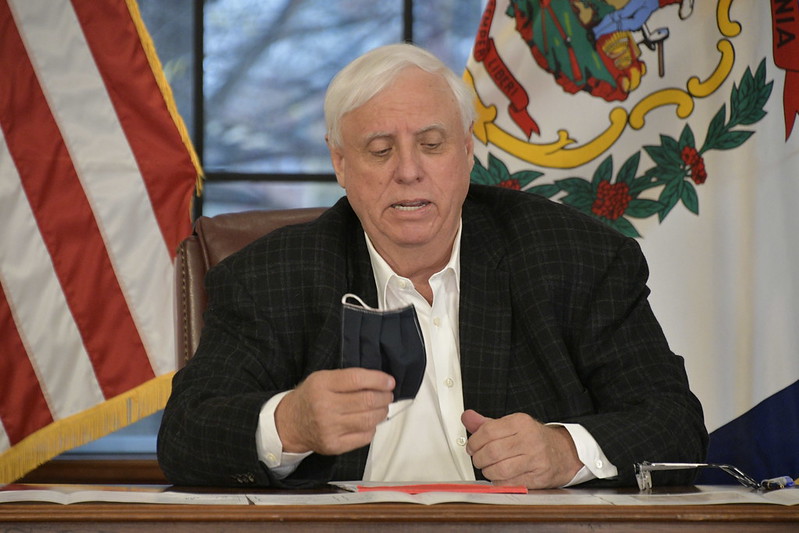 Although Justice began his regular briefing today by announcing 40 additional deaths since the last briefing on Wednesday, he said he does not want to order another statewide lockdown.

“This is coming at us in waves,” the governor said. “I am trying with all in me to not shut stuff down. I am trying to keep people alive.”

But he also acknowledged that his options are fewer and fewer. Although he used to describe “running to the fire,” the situation he described today is now beyond that.

Justice’s tone was affected not only because of rising covid-19 numbers but also because a crowd he described as 30 or 40 people was protesting his mask order outside the Capitol when it was time for the briefing. He said protesters were not wearing masks and had to be moved back by security.

There have been similar spikes for cases requiring the intensive care unit, now at 162, and ventilators, now at 76.

“I’m telling you this situation is really critical,” Justice said.

Wheeling Hospital reported today that 70 employees are off the job with covid or quarantined because of potential exposure. Hospital officials are asking patients to reconsider routine appointments or screenings.

Charleston Area Medical Center released a statement saying the hospital network had reduced elective procedures by 50 percent because of the recent surge of patients.

“CAMC continues to see an increase in higher acuity patients, not necessarily COVID, requiring ICU-level care. Throughout the pandemic CAMC has occasionally reduced some procedures as the need for beds necessitated,” the hospital stated.

Justice described a focus on curtailing some — but not all — elective procedures statewide. He said that initiative followed a phone call with Albert Wright, chief executive of WVU Hospitals, and more weekend conversations with Clay Marsh, the state’s coronavirus response coordinator.

“One of the biggest risks for us as a state is to see a surge happen, a rapid increase in the number of people who are going to hospitals, hospital emergency rooms and hospital beds and ICUs because after a while that consumes a lot of the resources of these hospitals — and particularly our most sophisticated hospitals in the state,” Marsh said.

“Then people who need to come into those hospitals for cancer care or heart care or strokes or infections start to have problems finding beds.”

He said once smaller hospitals become saturated with covid patients, that increases the number of transfers to larger hospitals. “Then we see the bigger, more sophisticated hospitals in our state start to get into trouble because they lose the capacity.”

Marsh also described efforts to “not do the kinds of surgeries that can be put off.” He said that would not include urgent surgeries necessary to stabilize medical care.

The specifics of how that would be defined weren’t immediately clear. Hospital systems are expected to provide plans to the West Virginia Hospital Association for review.

Justice described possible changes as aligning closure times for bars and restaurants to those in surrounding states so people won’t just cross the border for service. He suggested there could be other tightened restrictions on bars and restaurants in particular counties.

Justice repeated that he could close the entire state, but there would be repercussions to that too. He said he’s trying to balance the state’s response.

“If we just wanted to look at this this way, you’d make my job a whole lot simpler by saying you’re going to have to just close West Virginia. Well, who wants to do that?” he said.

“This is not a simple equation.”