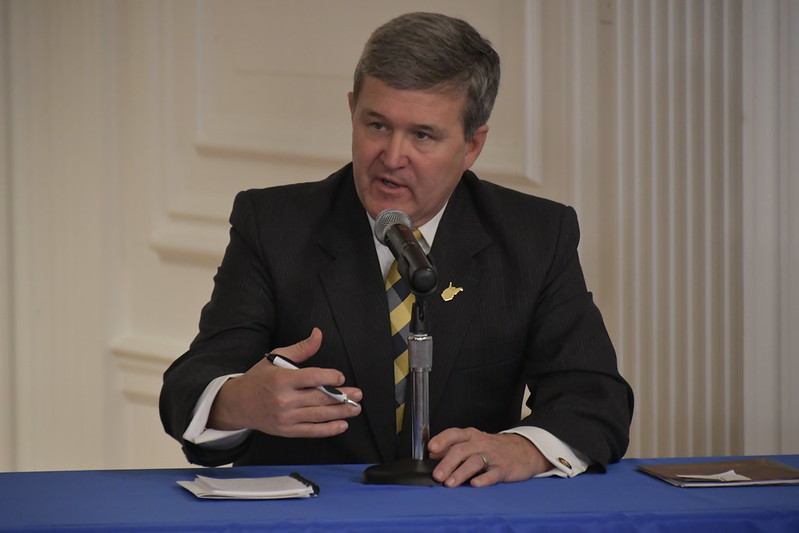 “Were the electors elected in those states properly?” Warner asked today on MetroNews’ “Talkline.” “There’s enough issues to raise that to the Supreme Court.”

The lawsuit led by Texas and supported by West Virginia and 16 other states asks the U.S. Supreme Court to block the four swing states from using their certified voting results to appoint presidential electors to the Electoral College. That could invalidate millions of votes.

Such a lawsuit asking for that many votes to be invalidated is unprecedented and follows on the heels of dozens of court losses by Trump supporters.

Warner repeatedly emphasized the case is not about fraud but instead is about whether changes to the electoral process in those states were conducted legally. But he also made a prominent appearance at a rally meant to emphasize ongoing fraud claims.

Warner, a Republican, appeared Wednesday night at a “March for Trump” bus rally in Charleston and also appeared on a Right Side Broadcasting Network interview. At one point in the broadcast, West Virginia’s Secretary of State appeared to be holding up a “Stop the Steal” sign.

He contended the lawsuit does not allege widespread voter fraud but instead focuses on election irregularities. The thrust is that  Pennsylvania, Georgia, Michigan and Wisconsin took actions outside their Legislatures to change the voting process, allowing fraud possibilities.

“So if somebody cast a vote, and it was supposed to be there by a deadline of Election Day, but then a state legislature or a governor or somebody else says, “No, we’re gonna let it go for three more days” — If the legislature hasn’t done that, or if the Constitution says that’s not permissible, then we’re into, it’s not necessarily fraud, but it’s an impropriety or an irregularity that needs to be looked at by the highest court in the land to say, ‘Yes, that’s right,’ or ‘No, it’s not,'” Warner told the crowd at the “Stop the Steal” rally.

“And if it’s not right, then yes, the people of Texas and now the people of 18 other states, or whatever it was, that have now joined on, your votes have been disenfranchised, or lessened, or weakened because of these improprieties. And that’s what’s going on here.”

But at another point in his remarks, Warner expressed gratitude that Trump had won over Hillary Clinton four years ago, leading to the three Supreme Court selections Trump wound up making.

At that point, the elections officer made a bottom-line assessment of the result he would like to see from the election that ended this past Nov. 9.

“That’s why it’s so important to keep him in office,” Warner said of Trump, who trails Biden in electoral votes, 232 to 306.

In the interview with the right-wing network, Warner went farther than process, making references to allegations of fraud in those states’ elections.

Right Side Broadcasting: “So are you optimistic about the results of this lawsuit?”

Warner: “I am because of so much of the evidence that’s out there. When cardboard is put over windows, when two cases of ballots come out, when ballots are pre-marked or don’t have folds on it — there’s all those things. Those are red flags that need to be looked at and not just discounted, and that’s what the mainstream media wants us to do.”

Warner went on to express a desired conclusion by the U.S. Supreme Court.

“That’s what we’re hoping the Supreme Court will come to the conclusion there are too many problems. We don’t have time for criminal cases to occur if we do the investigation so the only proper remedy for this for it to occur before January 20th is to throw it back to the states, which is what needs to happen.”

Today, the four states defending their certified results face a deadline to respond.

Georgia Deputy Secretary of State Jordan Fuchs said the theories in the lawsuit “are false and irresponsible.

“Texas alleges that there are 80,000 forged signatures on absentee ballots in Georgia, but they don’t bring forward a single person who this happened to,” she said. “That’s because it didn’t happen.”

“America and West Virginia deserve to get to the bottom of these really troubling issues. I urge the U.S. Supreme Court to carefully consider Texas’ and the states’ requests,” West Virginia Attorney General Patrick Morrisey, a Republican, said when announcing the state’s involvement.

Many of the changes the other states made to their electoral process were in response to the coronavirus pandemic. The lawsuit contends those changes should have been approved by state legislatures and that questions surrounding the resulting process are so entangled that the certified results should not dictate electors to the Electoral College.

“That dilutes the vote in the rest of the states,” Warner said today on “Talkline.”

West Virginia delayed its Primary Election by a month and allowed any voter registered in the state to vote by absentee ballot because of the pandemic. West Virginia absentee ballots had to be postmarked by election day and could be counted up until canvassing, which was six days later.

Morrisey signed off on loosening some West Virginia voting procedures when the pandemic first hit last spring.  He cited the governor’s emergency powers in state code, allowing Warner to institute those changes. But there was no specific West Virginia legislative vote on the changes.

In the challenge to other states’ elections, Warner said the process should just play out.

“If those electors weren’t chosen properly there’s another recourse and that is to go to the Congress of the United States,” he said.