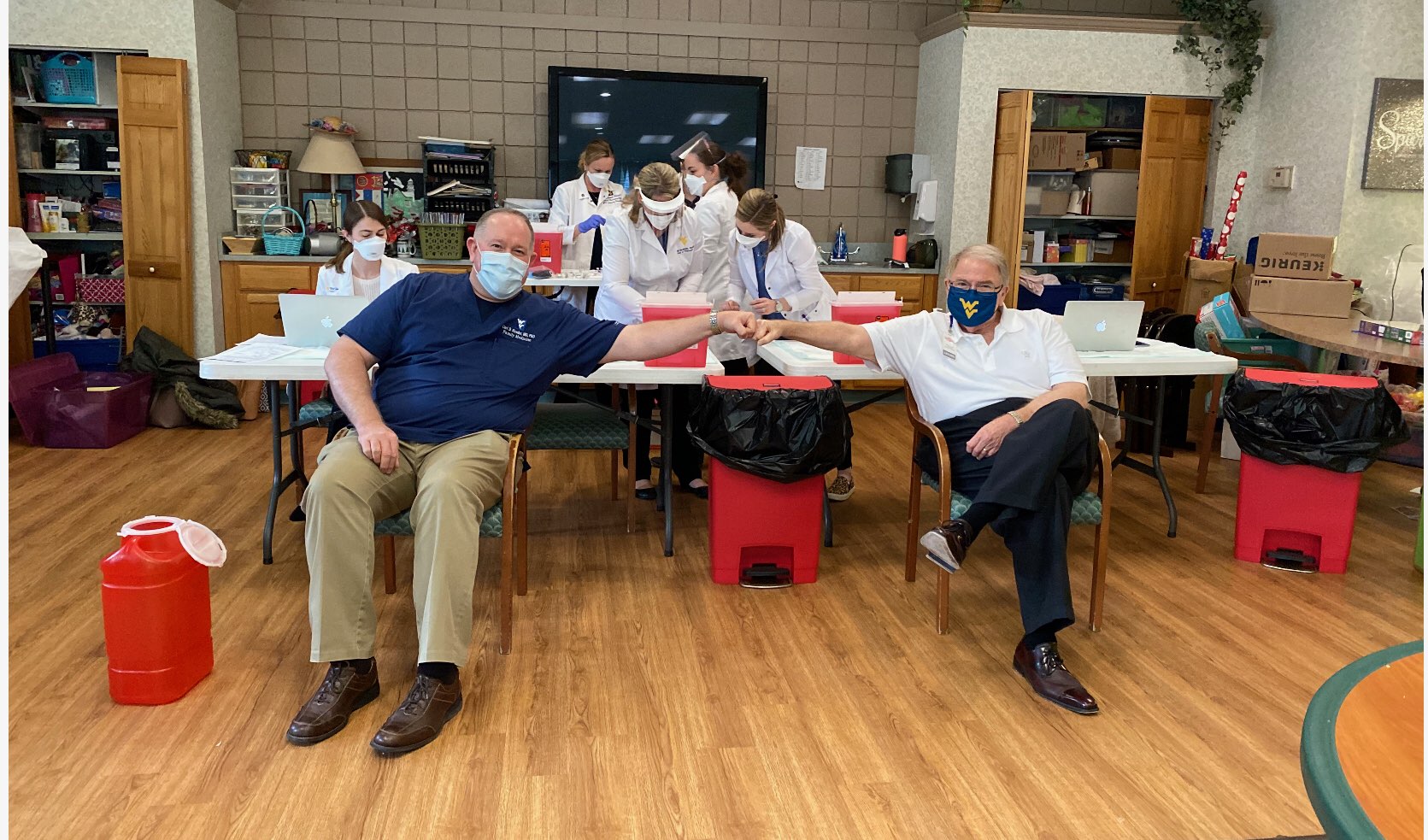 West Virginia is out to a quicker start than the rest of the nation to vaccinate nursing home residents, and that’s cause for joy at the Sundale long-term care facility in Morgantown after this extremely difficult year.

As residents and staff started receiving their vaccinations at last yesterday, one of the residents sat at a piano and started playing Christmas music.

“It was just a festive atmosphere,” said Michael Hicks, the chief executive at Sundale.  “They were singing Christmas carols and just having a blast. The whole atmosphere was really pretty amazing.”

Sundale had a notably difficult year.

The facility experienced five deaths of residents in the early part of the pandemic, drawing tragic attention at the time as a major state news story.

Two residents were the first documented instances of community virus spread in West Virginia. The two, 73-year-old Shannon Taylor and 69-year-old Robert DeVault, had difficult cases that required their hospitalization and the aid of ventilators.

They survived, though, and on Tuesday they were the first residents at Sundale to receive doses of the newly-approved vaccine.

“Yesterday was one of the happier days that we’ve had in the last nine months,” Hicks said.

There currently remain 116 outbreaks in long-term care facilities across the state.

In distributing the first limited doses of vaccine, West Virginia officials made a priority of front-line healthcare workers and long-term care residents and staff.

Long-term care leaders in West Virginia said about 2,000 residents and staff at 18 facilities were vaccinated on Tuesday, the first day. And about another 2,000 were expected to receive vaccinations today.

West Virginia is aiming to vaccinate all nursing home staff and residents within three weeks.

West Virginia actually got a jump start on other states by circumventing a federal program that meant working with some of the big, national pharmacies and going instead with regional and local pharmacies in the state.

CVS and Walgreens have an agreement with the federal government to vaccinate nursing home residents across the country through a voluntary program. Their national rollout calls for distributing the first Pfizer vaccines on Dec. 21.

One issue is getting the necessary permissions signed for residents who may not be able to sign for themselves, officials said of the federal partnership with CVS and Walgreens.

“But I know that our nursing home community in West Virginia is moving ahead even quicker than this,” Justice said today.

“We decided to use a different approach for our program, because over 40 percent of our pharmacies are not chain-affiliated. We have instead partnered with all the pharmacies in West Virginia. We felt that, from a state perspective, we would be limiting our ability to rapidly distribute and administer the vaccine to the population in need if we had gone with the federal program.”

That move drew praise from Todd Jones, President of AMFM Nursing and Rehabilitation Centers in West Virginia, during a briefing today.

“The speed with which this is happening is amazing. We are hoping to be done before most other states even start. Yesterday, we vaccinated 1,830 people in 16 of our 19 AMFM facilities,” Jones said.

“I have to admit that yesterday was the best day that I’ve had at work in nine months, to see the residents and the employees so happy to see the end of this in sight.”

Sundale in Morgantown has 89 residents. Seventy-five had their consent forms ready and got their vaccinations yesterday.

“Everyone is taking a sigh of relief,” Hicks said.