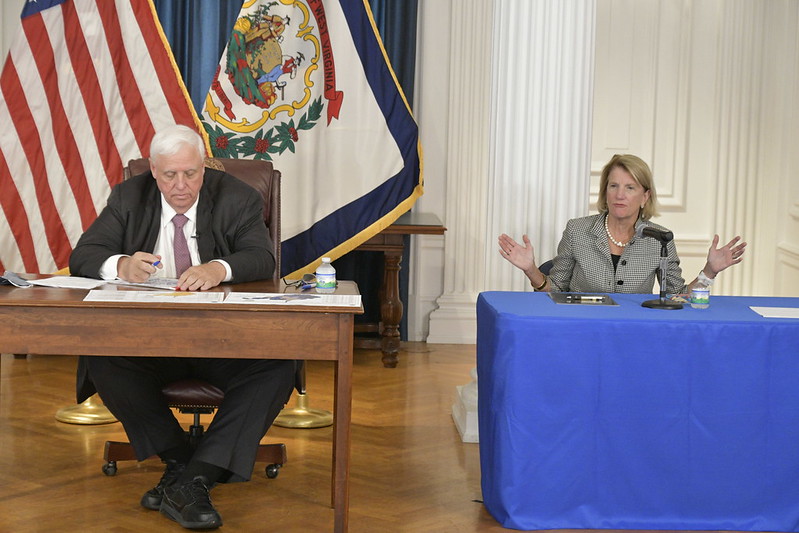 West Virginia is up against deadline to spend $764,887,286, but U.S. Senator Shelley Moore Capito has expressed some confidence the state could get a reprieve.

West Virginia drew down $1.26 million in federal CARES Act money last spring and has spent $503,895,780 so far, according to state figures. Invoices for spending are likely flowing in, but the bulk of the money is with the state Board of Investments.

States have a Dec. 30 deadline to spend the money.

Capito today, though, suggested states could receive an extension — as well as more flexibility for spending — under new legislation that’s being negotiated in Congress.

It’s by no means certain that relief package will pass, but congressional leaders were giving optimistic signals.

“I’ve been in close contact with the Governor’s Office to tell them the things that are in here that would be appropriate for the state, and extending that deadline is definitely in there until the end of 2021 no matter which bill passes,” Capito said, alluding to two related bills with covid-19 financial relief.

She added, “I’ve read that the governor has said he’s committed a lot of the $700 million; it just hasn’t gone out the door. He’s going to have a lot of impetus to keep moving forward on this. I think he’s been waiting so we could open up the window so we could replace lost tax revenues, and he’s going to have the ability to do that. So honestly, I think he’s done it the right way.”

Justice has been criticized for months about the pace of West Virginia’s federal relief spending.

He has described the spending as “buckets,” meaning allocations. But U.S. Treasury calls for spending — and the only clear latitude is that states can provide invoices after Dec. 30 for expenditures that took place prior to that date.

The governor, without particularly resolving that discrepancy, has expressed confidence about West Virginia meeting the federal requirement.

“We’re making it come together,” Justice said during a briefing today.

Justice has outlined a series of allocations for West Virginia:

That leaves $60 million as a buffer.

The governor then generally described regular meetings to go over the federal relief dollars. He described some adjustments such as the expense of testing and a downward adjustment for small business grants (“We didn’t get the response there.”)

“We’re dialed in and watching this stimulus package that could come out that change the rules of the game again and could actually give us extensions or more monies,” Justice said.

The governor suggested the federal government could forgive unemployment insurance costs, specifying that the $287 million set aside for those expenses last fiscal year then could be back in play for the state. If not, the money is there to protect businesses “from rate hikes out the moon,” he said.

“But trust me, we’re meeting every day,” he said. “This thing is going to come together, and we’re going to go right across the finish line with absolutely the handling of these dollars almost flawless.”

The state should demonstrate more urgency to use the relief money to help citizens who are suffering economically, said Kelly Allen, executive director of the West Virginia Center on Budget and Policy think tank.

In October, about 30 West Virginia groups sent a letter asking the governor to prioritize the federal money for West Virginians facing hardships during the pandemic and economic downturn.

“Economic security is part of our public health defense. In response to spiking COVID cases, we should be utilizing our remaining CARES funds to ensure that families are safe, housed, and fed, and that they don’t have to risk eviction or utility shutoffs,” Allen said today.

“Regardless of whether the deadline is extended, we should be using these funds to address basic needs that directly impact public health.”