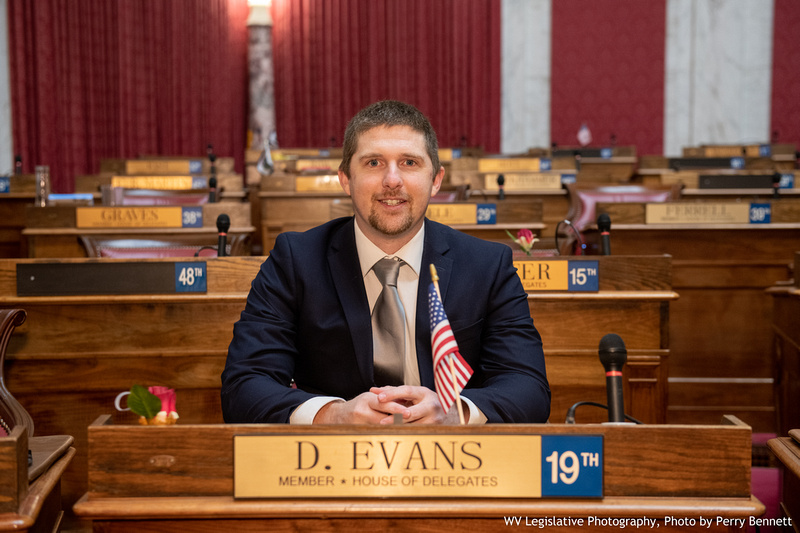 Derrick Evans, facing federal charges for entering the U.S. Capitol with a mob, has resigned from West Virginia’s House of Delegates.

“I hereby resign as a member of the House of Delegates, effective immediately,” Evans said in a one-page letter submitted to Gov. Jim Justice and the House.

The House released another statement from Evans expressing regret.

“I take full responsibility for my actions, and deeply regret any hurt, pain or embarrassment I may have caused my family, friends, constituents and fellow West Virginians,” Evans stated.

“I hope this action I take today can remove any cloud of distraction from the state Legislature, so my colleagues can get to work in earnest building a brighter future for our state. And more importantly, I hope it helps to begin the healing process, so we can all move forward and come together as ‘One Nation, Under God.’”

Evans, a Republican from Wayne County just sworn into House of Delegates, has contended he was videoing history and was swept along with the crowd. But his own video depicts him calling out “Move! Move!” before going through the Capitol door, as security alarms blare.

He was set to be a first-time officeholder. He placed first in a two-member district in the most recent General Election, with 8,227 votes.

Several of his fellow Republicans, including Delegates Steve Westfall of Jackson County, Ben Queen of Harrison County, Joshua Higginbotham of Putnam County and Jason Barrett of Berkeley County, publicly said Evans should resign or be forced out.

“Delegate Evans was unfortunately a part of the events this week that threatened what has historically made America a beacon for the rest of the world: the peaceful transfer of power. Earlier today, Delegate Evans made the decision to resign from his position in the West Virginia House of Delegates. Now, we return to the work of rebuilding our nation’s political climate,” Hanshaw stated.

“In announcing his resignation, Delegate Evans said accepted responsibility for his actions and apologized to those he’s hurt. In this time of overheated, hyperbolic political rage, I think that’s a good first step for us all to take right now.”

The Legislature is set to convene next Wednesday for a one-day session to select leadership and set rules. Lawmakers were already anticipating a motion and vote to expel Evans.

Instead, Hanshaw stated, delegates may begin hard work on the many challenging issues facing the state. The Legislature convenes for a full 60-day session on Feb. 10.

“We have a tremendous amount of work ahead of us, from dealing with a rampaging pandemic, healing an economy wounded by shutdowns, helping those whose livelihoods have been destroyed, getting our kids back into classrooms and giving them a quality education, finding new ways to open up job opportunities and investment in our state, and continuing our work to truly make West Virginia the best place to live, work and raise a family. And the Legislature only gets 60 days to accomplish this.”

Evans was arrested Friday and faces two federal charges after sweeping into the U.S. Capitol with a mob this week.

Two federal misdemeanors are both punishable with fines and potential jail time: entering a restricted public building and violent entry and disorderly conduct on Capitol grounds.

After a short federal court hearing Friday afternoon, he was released on a personal recognizance bond.

A charge of entering restricted government buildings is a misdemeanor, punishable by fines and up to a year in prison. However, the punishment could increase significantly if “the offense results in significant bodily harm.”

The charge applies to buildings where anyone protected by the Secret Service is visiting or buildings with an event of national significance.

A second charge, violent entry and disorderly conduct on Capitol grounds, is also a misdemeanor with a possible punishment of six months jail time.

An affidavit from FBI agent David DiMarco indicates the investigator relied heavily on the copy of Evans’ own video, comparing the voice to the voice in Evans’ videos promoting his campaign for state office. The agent also relied on Evans’ enthusiastic identification of himself.

The FBI agent described Evans as laughing and saying, “I’m just the messenger so don’t be hating on me.”

Ten seconds later, he notes law enforcement as an obstacle: “We’re at the door now. There’s cops inside stopping us now.”

The FBI agent describes Evans, a minute and a half into the video shouting “the door is cracked!” as individuals in the front of the crowd appear to successfully pry open the door and begin entering.

Ten seconds after that, Evans shouts, “We’re in! We’re in!”

In a statement issued Thursday evening, a lawyer for Evans made that same argument.

The three-page statement by attorney John H. Bryan of Union described Evans as an activist and “journalist” who was documenting the day’s events while being swept along in a crowd.

In a news release issued Saturday, the U.S. Department of Justice described it this way instead:

“Derrick Evans, 35, of West Virginia, was charged with one count of knowingly entering or remaining in any restricted building or grounds without lawful authority; and one count of violent entry and disorderly conduct on Capitol Grounds. Evans was taken into custody Friday.

“It is alleged that on Jan. 6, 2021, Evans, a recently elected member of the West Virginia House of Delegates, streamed live to his Facebook page a video of himself joining and encouraging a crowd unlawfully entering the U.S. Capitol. In the video, Evans is allegedly seen crossing the threshold of the doorway into the U.S. Capitol and shouting, ‘We’re in, we’re in! Derrick Evans is in the Capitol!'”