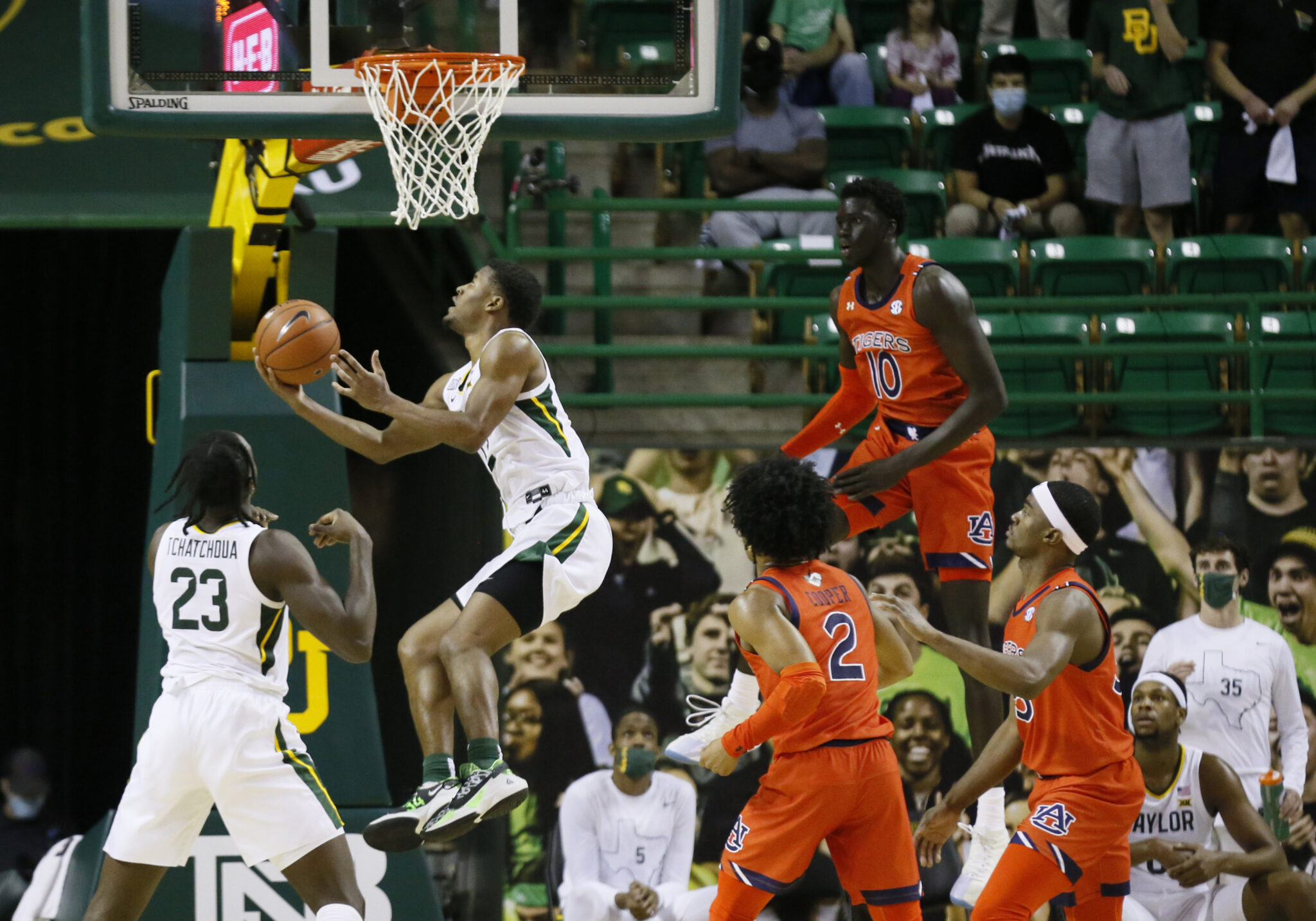 While the coaches involved may not have been exactly thrilled about where the SEC/Big 12 Challenge fell in the schedule, it did result in a day-long promotion of both conferences by ESPN, even without a Texas/Kentucky primetime matchup cancelled due to COVID concerns inside the Wildcats’ program.

The Big 12 lost the challenge, five games to four, but Oklahoma’s upset of Alabama was arguably the most significant outcome of the nine games played.  And despite losing the challenge, the Big 12 remains second only to the Big 10 in conference strength, according to kenpom.com.

Lets check out our latest Snapshot, where we employ a fantasy sports-style tier format, rather than conventional standings or power rankings.

Baylor more than held up its part of the conference bargain in the SEC/Big 12 Challenge, taking down Sharife Cooper and the Auburn Tigers, 84-72 in Waco on Saturday.  The Bears have plenty of star power in Jared Butler, MaCio Teague and Davion Mitchell, but when Adam Flagler goes off for 19 points and 8 rebounds — BU is nearly impossible to beat.  Scott Drew’s team is getting it done at both ends of the floor; the Bears are No. 1 nationally in adjusted defensive efficiency and third best in adjusted offensive efficiency.  If Baylor wins at Texas on Tuesday night, the Bears will essentially have the regular season conference crown locked up.

While Baylor currently rules the Big 12, Oklahoma pulled off the biggest win for the league in the Challenge with the SEC, dropping No. 9 Alabama, 66-61, as the Sooners’ streak of victories over Top 10 teams has now reached three straight upsets (Kansas, Texas).  The Sooners were led by sophomore guard De’Vion Harmon, who poured in 18 points.  Harmon’s efforts were huge for OU, as Austin Reaves and Alondes Williams missed the game, due to COVID-19 protocols.  Oklahoma has a huge road test Monday night at Texas Tech; their fourth straight game against a nationally ranked team.

COVID-19 was a big part of the story at Texas this week.  Their game at Kentucky was cancelled on Saturday night, due to COVID issues with the Wildcats and the Longhorns are currently without head coach Shaka Smart who is in quarantine.  Without Smart, Texas dropped a one-point heartbreaker at home to Oklahoma last week and host undefeated Baylor on Tuesday night, in potentially the biggest conference game of the year.

Despite a standout effort by Derek Culver, WVU dropped an 85-80 decision to Florida in Morgantown on Saturday.  Culver went off for a career-high 28 points — 21 of which he scored in the first half, to go along with a dozen rebounds.  But while Culver was hot, the majority of his teammates were not.  Deuce McBride, the hero of the improbable comeback against Texas Tech, was just 3-of-15 from the field against the Gators and missed his last eleven shots.  The Mountaineers have a great chance to bounce back this week; visiting hapless Iowa State on Tuesday and hosting slumping Kansas next Saturday.

It’s hard to recognize Kansas right now.  Gone is the Jayhawks’ swagger that was in full display when they drilled Creighton, Texas Tech and West Virginia back in December.  KU was hammered at Tennessee, 80-61 on Saturday in a game in which the Vols were never threatened.  Kansas is currently fifth in the Big 12, a conference they have dominated for decades.  The Jayhawks have capable players in the likes of Marcus Garrett, Ochai Agbaji and Christian Braun, but as dreams of a regular season conference crown have all but vanished, its hard to imagine Kansas catching a spark for a serious run at the conference tourney in Kansas City.

It was quite a week for Texas Tech.  After blowing a 12-point lead with seven minutes to play in a loss at WVU, TTU finished its game at LSU on a 12-0 run to top the Tigers, 76-71.  Even if you aren’t a Red Raiders fan, Mac McClung continues to be must-see-TV. In his 22-point effort at LSU, McClung nailed a pair of threes late to cut the lead to one, then deflected a Tigers’ inbounds pass to  Terrence Shannon, who dropped home the go-ahead layup with 29 seconds left.

Texas Tech hosts Oklahoma on Monday and travels to Manhattan to face Kansas State next Saturday.

OSU got Cade Cunningham back for their home date with Arkansas and he scored 21 points in the 81-77 victory over the Razorbacks on Saturday.  While the two teams involved are currently in the middle of the standings in their respective conferences, the Hogs and Cowboys matchup featured some serious star power, as Cunningham and Arkansas’ Moses Moody (17 points) are both likely lottery picks who will be NBA rookies next season.  Turnovers continue to be an issue for Oklahoma State; the Cowboys had 24 turnovers in a mid-week win over Iowa State without Cunningham and managed to survive against Arkansas despite 19 more turnovers.  OSU visits TCU on Wednesday and hosts Texas next Saturday.

TCU becomes the first team in our Snapshot to advance a Tier following a pair of losses.  After hanging tough in a loss to Kansas, TCU took Missouri to overtime on the road before falling, 102-98.  The Frogs saw a late 12-point lead melt away in the OT defeat, but are showing signs of improvement.  TCU had just eight turnovers at Mizzou, after committing 22 turnovers in the loss to Kansas last Thursday.  At Missouri, true freshman point guard Mike Miles continued his outstanding play, pouring in a career-high 28 points, to go along with no turnovers.  TCU hosts Oklahoma State on Wednesday.

Kansas State had a great chance to snap its eight-game losing streak, but faded late in a 68-61 home loss to Texas A&M.  The Wildcats got another solid game from freshman point guard Nijel Pack, as he scored a career-high 26 points, knocking down 8-of-14 from three-point range. The loss came with a cost; sophomore DaJuan Gordon left the game early with a left foot injury, Bruce Weber noted after the game he was hoping the injury was just a sprain and not a fracture, but in any case, Gordon looks to be out for an extended period.  K-State heads downriver to meet Kansas on Tuesday, then hosts Texas Tech on Saturday.  KSU is quickly running out of games in which they could realistically snap their current slide.

It was another tough week in a nightmare of a season for Iowa State, losing on Saturday at Mississippi State, 95-56, in the SEC/Big 12 Challenge.  ISU trailed by 16 at the half and were never in the game.  Iowa State’s 56 points were its lowest offensive output of the year and the Cyclones were playing without Nick Schuster, Solomon Young, Javan Johnson and Tre Jackson due to COVID protocols.  At 0-6 in conference play for the first time in a half-century, Iowa State hosts WVU on Tuesday night on ESPN+.