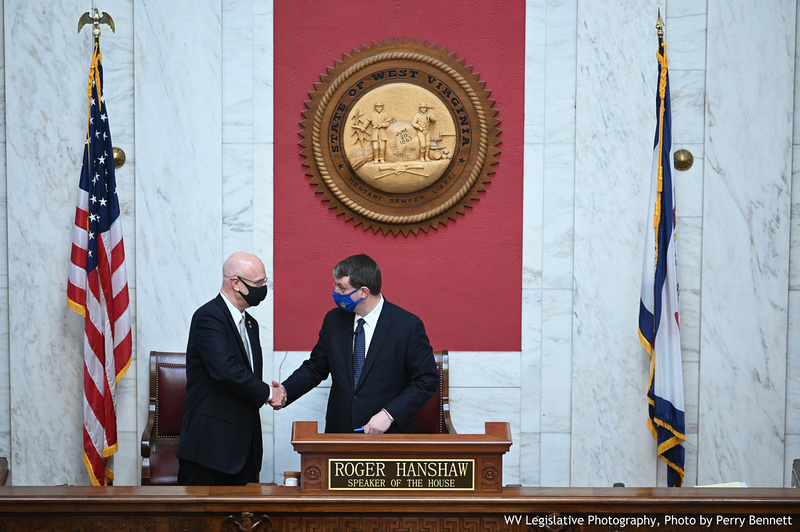 West Virginia political leaders agree they’re interested in phasing out the state’s personal income tax, but just a few days before the annual legislative session begins no one is saying how.

“As for the absolute details on the personal income tax, not yet,” said Senate President Craig Blair, R-Berkeley. “It’s premature. February the 10th is not here. When the time is right, you’ll know.”

Blair has said he would like to phase out the tax. So has Gov. Jim Justice. Leaders in the House of Delegates have been less clear, although they have described a general interest in tax reform.

The legislative session kicks off this Wednesday, Feb. 10, with Governor Justice laying out his vision that evening during an annual State of the State address.

Speaking about the income tax phase-out in recent weeks, Justice has expressed his support while also acknowledging it’s complicated.

“I do want to caution that along this path, it’s a heavy lift,” he said.

The “how” is important.

The personal income tax represents 43 percent of the General Fund, or $2.1 billion of the base budget this fiscal year. In other words, it represents almost half of how state government pays for the basic services of state agencies.

“I think West Virginians should see the plan as soon as possible,” said Kelly Allen, executive director of the West Virginia Center on Budget & Policy think tank. “Forty-three percent of our state budget — which is how much revenue we get from the state income tax — is a lot.

“Whatever iteration of the bill there is seems like it is likely to raise taxes on the majority of West Virginians while asking them to get less in public services.”

A blog item by the think tank explores how to pay for the income tax cut.

Mathematically, one possibility would be raising the sales tax to more than 10 percent to bring in an extra $1 billion. Doing so would raise taxes for 60 percent of West Virginians, the blog concluded.

Cutting state agencies practically across the board by 10 percent, 20 percent, sometimes even 30 percent — and eliminating some agencies altogether — still leaves another $587 million still to identify.

That’s the kind of very serious tradeoff that West Virginians would need to have explained very clearly, Allen said.

“Some of these things are going to be unpopular,” she said. Of lawmakers, she said, “It could also be that not unveiling an unpopular plan is helpful for them politically.”

What it would take

As the majority whip in the House of Delegates, Paul Espinosa’s job is to assess the positions of his fellow delegates. As the legislative session approaches, this is a question Espinosa has been working to figure out.

Espinosa sent a questionnaire to delegates, measuring their support for some of the steps that might have to be taken to cut the income tax. The questionnaire was described last week in the blog “Dragline.” Espinosa didn’t publicly release a version but did acknowledge it and described the reasoning behind it.

“We routinely reach out to our members to gauge their perspective on various issues, or even components of issues to gauge whether there are components or legislation that they can support – but just as importantly, if not more importantly, which components are non-starters,” Espinosa, R-Berkeley, said during a “Legislative Lookahead” event with reporters.

“I think as you look through the list of some of the items included in that media report, I think it’s fair to say a number of those are non-starters.”

When asked about the questionnaire, Espinosa was quick to point out that none of those options are certainties.

“Any suggestion that the items listed in the story you referenced constitute a plan is ludicrous,” he said.

Instead, he said, it’s taking a measure of what consequences delegates might accept if they really want to cut the income tax.

“Unless we ask our members where their pain points are, what are some of the aspects of tax reform they can support, we simply don’t know,” Espinosa said. “That process is ongoing. We’re still continuing that dialogue.”

Four years ago, lawmakers considered a similar plan for months to phase out the income tax — via a series of economic triggers — making up the revenue through increased and broadened sales taxes.

The measure wound up being blocked by the House of Delegates, where Democrats viewed the proposal as too regressive and Republicans viewed it as a tax increase overall.

Justice has been talking about eliminating the income tax since the morning after he won his re-election bid last fall.

More recently, he has suggested eliminating the income tax would give West Virginia an achievement to brag about, but the governor also acknowledged how challenging a phase-out would be.

“From a sex appeal standpoint, elimination of the income tax carries with it the most appeal of anything we could do,” he said during a Jan. 19 appearance on MetroNews’ “Talkline.”

Justice envisioned being the only state in the region with no income tax — and being able to market that to potential residents. He acknowledged the tax could not be cut in one move, but suggested a longer-term phase out might be achievable. And he was clear that stopping with a partial cut would have negligible value. Go big or go home.

“It’s got to be propped up and propped up correctly. And to just say we’re going to just lower our state income tax just a little bit and everything, that’s really not going to turn the dial,” Justice said.

“We’ve either got to find a way that there’s going to be a phase completely out of our income tax where we can market that, or we’ve got to say we just can’t pull it off at this time.”

But Justice said he would not favor the kind of potential cuts outlined in Espinosa’s questionnaire.

“I am not a fan of just taking a meat ax to the things we already have within West Virginia, like saying we’re just going to cut out funding to our universities or whatever, which is ridiculous. We can’t even think about doing something like that,” Justice said.

Yet the governor has not described what he would be in favor of doing.

The governor did say such details have been the subject of significant discussion behind the scenes.

Blair, speaking at “Legislative Lookahead” last week, acknowledged officials are indeed still looking ahead to how an income tax cut might work.

“It will be revenue neutral because we have no intention of taxing the people of West Virginia more money. In fact, we’re trying to make it so it’s less,” said Blair, R-Berkeley.

But he did describe the possibility of taxing services that aren’t taxed right now — perhaps some variation on one of the possibilities on Espinosa’s questionnaire — while also hinting at additional efforts to broaden the base for sales taxes.

“We have a rather large underground cash economy also. And we also have a booming tourism business. We can actually capture some of these revenues from people coming to visit the state and reduce it on our workers. That’ll all be in the future,” Blair said.

And generally, he described looking for “efficiencies” in government spending. “Sometimes you’ve got to bite the bullet, prioritize your spending,” Blair said.

Blair has described an income tax cut as a key ingredient in efforts to make West Virginia a more attractive place to live and stay. He has cited a goal of growing the state’s population by 400,000. If the state’s population continues to decline, he said, that would increase the tax burden for those who remain.

“If we continue the current path that we’re going with the population decline,” Blair said, “it continues to have a shrinking pie that everybody fights over.”