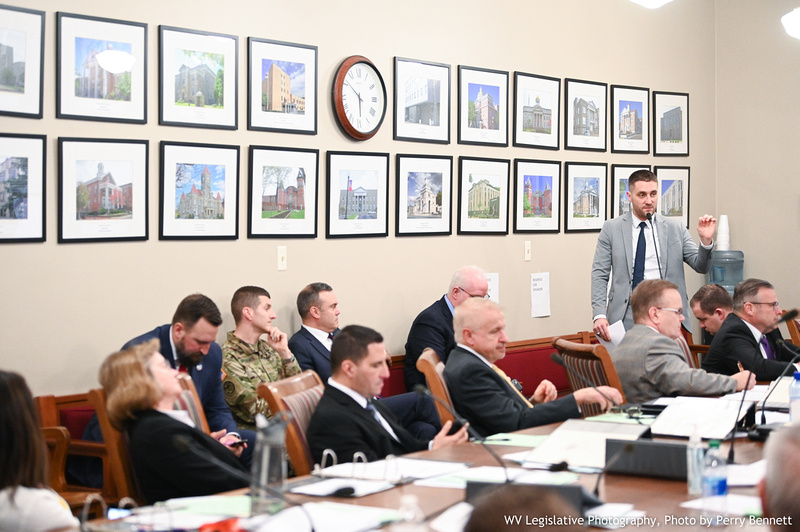 A West Virginia delegate now has plenty of company in his longstanding support for legislation that would prohibit National Guard reservists from serving in non-declared war zones.

Thirty-one states are considering forms of the “Defend the Guard” bill, including some big ones like Texas and Florida. That’s according to Bring Our Troops Home, a national organization meant to withdraw troops from overseas conflicts, particularly those without a congressional declaration of war.

“West Virginia is kind of — we call it the O.G. — the original gangster of the Defend the Guard movement,” said Dan McKnight, a veteran and Idaho resident who started the organization two years ago.

“Delegate Pat McGeehan sponsored the first bill there a few years ago, and he’s kind of carried this torch by himself until recently, two years ago, when we discovered the need for this bill.”

Supporters of the legislation say it would put pressure on Congress to perform its constitutional duty to declare war when American troops are sent into combat overseas.

The bill would require Congress to make an official declaration of war — or an action to call forth the state militia — before members of the West Virginia National Guard may be released from state control to participate in active duty combat.

“We think it’s right and proper that from the comfort of their own homes that Congress should put their names on the line to go to war before the National Guard puts their boots on the ground,” McKnight said.

The concern is whether such a bill would interfere with federal law — or if it could result in financial penalties against the states.

Brig. Gen. William Crane, West Virginia’s adjutant general, notes that the National Guard has a dual mission that consists of both federal and state roles. Under law, the president can activate the Guard to participate in federal missions, resulting in additional pay and benefits for servicemembers.

“If passed, the governor would be limited from releasing West Virginia National Guard forces and cause a risk of loss of federal funding,” Crane stated in response to this story.

Crane said the impact on funding could be as much as $100 million a year. And, he suggested it would result in reducing the capacity of the West Virginia National Guard, “which means less citizen-soldiers and airmen serving and making a difference in our communities.”

“The vast majority of the funding for pay, operations and maintenance of the West Virginia National Guard is federal,” Crane said. “If the state were to limit when the appropriate federal authorities could call on the Guard for federal combat, I believe West Virginia could lose federal missions, equipment and funding.”

Furthermore, Crane said, such a move could diminish some of the sense of duty shared by the Guard.

“Servicemembers join to serve their nation and its people,” he said. “They are extremely proud of their choice to serve in times of armed conflict.”

McGeehan, a former Air Force captain who served in Afghanistan, has pushed his own version of the bill for years. Its legislative path has sometimes been a drama.

Last year, the effort lost — on a tie vote — a motion on the House floor to discharge the bill from committee.

But that did secure a promise that the bill would be considered in committee. The “Defend the Guard Act” was voted out of the House Veterans Affairs and Homeland Security Committee, 15-7.  Some delegates seemed to vote in favor of advancing the bill, at least in part, so that constitutional issues could be discussed before the House Judiciary Committee, its next destination.

The House Judiciary Committee then rejected the bill on a 4-21 vote.

Then, as now, a major worry for those who have opposed the bill is that West Virginia’s National Guard might be subject to federal funding penalties if the measure were to go into effect.

Part of the concern is the effect of National Guard operations in West Virginia, particularly the state’s airlift wings in Charleston and Martinsburg. The Guard is a major employer too.

Economic consequences of the bill were a major thrust of the argument against it last year in the House Judiciary Committee.

Brian Abraham, now the chief of staff in the Governor’s Office and then the general counsel, warned about possible funding cuts last year. Abraham testified before the House Judiciary Committee.

“Right now, we get $380 million in federal funding matched by $13 million in state money. We believe that has a half a billion dollar indirect impact on the state of West Virginia,” said Abraham, who is also chairman of the Joint Staff in the West Virginia National Guard.

Concerns about the consequences of passing this bill are realistic, said McKnight, who has served in the Marines, the Army and the National Guard.

“We all know with dollars and equipment come jobs,” McKnight said. “If one state passed Defend the Guard, it’s a problem. They’re gonna lose some funding.”

But, he said, there would be safety in numbers if multiple states passed versions of the bill.

“If it’s 31 – at some point the Department of Defense will realize it’s not the states being anti-military or anti-war. It’s the states calling on Congress to do their jobs.”

McKnight described his organization as right-of-center veterans working at the state level to reign in national foreign policy. A couple of years ago, Bring Our Troops Home was looking for model legislation to run and came across an article describing

“We modeled a bill off of his bill, which he got from the Tenth Amendment Center,” McKnight said “We started tailoring it for Idaho, Wyoming and a couple of other states. For the first couple of years, Pat was going at it alone.”

In West Virginia, McGeehan has brought back the “Defend the Guard Act” again. It has been referred Feb. 10 to the Veterans Affairs and Homeland Security Committee, which hasn’t taken up the bill yet. It’s also referenced to the House Judiciary Committee, where McGeehan is a member.

“It seems like after all these years there’s been a lot of momentum on our side,” said McGeehan, R-Hancock.