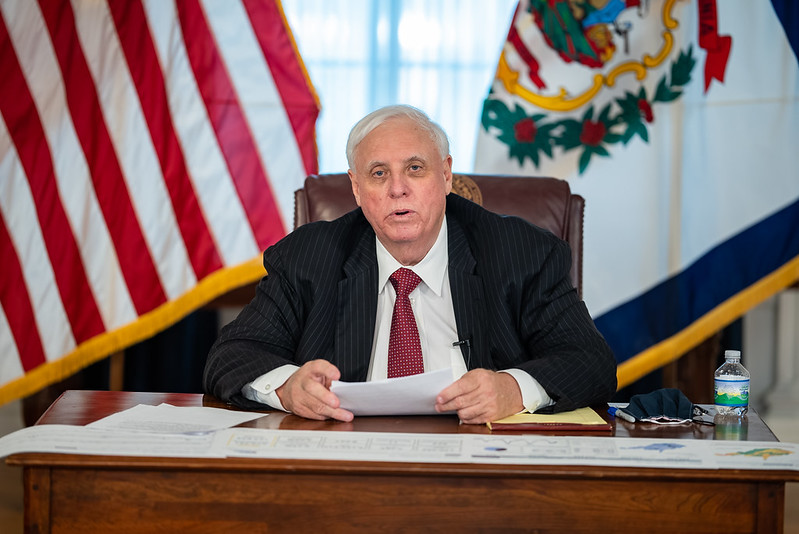 Gov. Jim Justice has been pitching a big proposal to halve the state’s personal income tax, but his administration hasn’t yet presented a bill for people to examine. Justice suggested — but didn’t promise — that might change today.

“Probably tomorrow, I’ll have it to the Legislature,” Justice said during a Wednesday evening Town Hall event about his proposal.

Today is Day 16 of the 60-day annual legislative session, meaning it is a little more than one-quarter concluded.

The income tax brings in about $2.5 billion a year and represents about 43 percent of the state’s general fund, paying for services like education and healthcare.

So far, the proposal has been heavy on salesmanship and short on specifics.

Justice has been talking about cutting the income tax since the day after last fall’s General Election. He proposed its broad outlines during his State of the State address earlier this month.

The governor has hosted two Town Hall events already this week and seems to be promising more. And he met privately with legislative Democrats on Wednesday morning.

At least twice recently, the governor has said previous promises to drive growth — through establishing right-to-work, cutting the prevailing wage or cutting corporate taxes — haven’t delivered. “And we’ve run to the windows and they haven’t come,” Justice, a Republican, told the state Wednesday evening.

But this plan will be different, he said.

His pitch is that people know him by now and should trust him. And he’s betting on the absence of a West Virginia income tax being so attractive that people will come here in droves from elsewhere.

“Nothing has sex appeal like getting rid of your state income tax,” he said Wednesday night.

But what’s been missing is a detailed description of the tradeoffs. Justice is talking about raising a variety of other taxes, including the personal sales tax, but there have been precious few specifics for people to weigh against what he characterizes as the gain.

When a citizen identified as Shay from Moorefield asked on Wednesday what the plan actually is, Justice told her “It’s not going to hurt the state budget.”

But, in that moment, he stopped short of actually telling Shay the specifics of the plan to offset the cut.

“Now we don’t need to go through every little piece of it,” the governor said.

A few minutes later, though, state Revenue Secretary Dave Hardy spoke and delivered a somewhat more detailed version of what the tax plan would do than previously described.

The concept, Hardy said, is to cut the state personal income tax in half by next Jan. 1.  That amounts to about a billion dollars.

“Then the question becomes, how do we keep West Virginia whole and keep things going smoothly?” Hardy said, noting that the governor has specified that the state General Fund should remain flat over the next several years.

Next, Hardy described some tax hikes to make up for the big tax cut:

— The consumer sales tax right now is 6 percent. A possible increase would be from 7.5 to 7.9 percent. That doesn’t reflect the additional 1 percent that some municipalities add on.

A caller at one point asked Justice if those additional taxes on services wouldn’t just be passed along to consumers. Against the conclusions of many experts, Justice said there would be no pass along. He said that’s because the lawyers and accountants would feel pressure to compete.

— A tiered severance tax system could be imposed for coal, oil and natural gas. When markets are good, companies in those sectors would pay more. When times are tough, they would pay less. “We’ve asked them to consider and agree that it would be in the best interest of our state if we tier those severance taxes,” Hardy said. “As they make more money they’re asked to pay a little bit more.”

— A cigarette tax could go up from the current $1.30, but Hardy said the exact amount has not been pinpointed “and that’s something the governor will be talking to the Legislature about.” Other tobacco products also have increased taxes. “Another product that is very controversial is e-cigarettes. There’s discussion about whether we would raise that tax as well.”

— Hardy said the current soda pop tax of a penny per 16.9 ounce container could go up.

“So there’s a lot of moving parts in this idea, but the idea is very simple: Cut the state income tax by 50 percent and then go out across all aspects of West Virginia’s economy, the business community, consumer sales tax, the luxury tax, soft drinks, cigarettes, perhaps alcohol as well,” Hardy said.

That would be combined with possible state budget cuts of about $25 million — not yet specified — along with some goals of reducing the state workforce by attrition.

Justice for the first time on Wednesday evening described the possibility of a tax rebate for those who don’t currently pay an income tax but who would pay higher sales taxes.

“To make it to where it is not negative toward them, I am working really, really hard in trying to come up with a way to do some kind of tax rebate check,” Justice said, suggesting that might amount to $100 to $150 or so. He described this possibly applying to about 200,000 families.

The governor promised to have more Town Hall sessions to pitch the income tax plan.

“We’ll keep it up and we’ll keep trying until we get there or we don’t,” he concluded. “One way or the other. Thank you so much.”