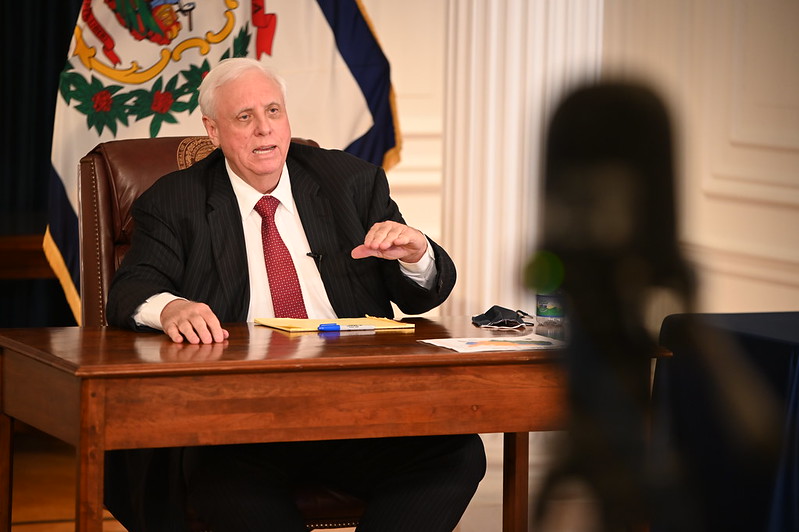 Gov. Jim Justice has repeated an idea of setting aside financial “surplus,” built on the strength of federal relief dollars, into a “bucket” while touting his income tax cut proposal that could leave a big hole in the state budget.

Analysts say it’s doubtful West Virginia could use the federal relief money that way — and it doesn’t seem to be in line with federal intent.

“The state fiscal aid under the CARES Act and the American Rescue Plan is intended to cover costs incurred specifically related to the economic and public health crisis,” said Kelly Allen, executive director of the West Virginia Center on Budget & Policy, a think tank.

“It would be unthinkable — and likely not allowable — to use relief funds intended for families and communities to pay for tax cuts. It is untenable and fiscally irresponsible to use one-time funds to pay for permanent tax cuts.”

For the covid-19 relief package under consideration by Congress right now, there’s language being tossed around that would prevent states that have tweaked their revenue mechanisms this past year from qualifying from any additional covid funds.

Where West Virginia is concerned, an elimination of the income tax could prevent the state from qualifying for any money moving forward.

The House of Representatives has passed the $1.9 billion covid relief bill. The U.S. Senate is expected to take it up in the coming weeks.

West Virginia received $1.25 billion in state pandemic relief last spring. Through the middle of this month, the state still had about half, $660,874,770, according to the state Auditor’s transparency site. Justice’s administration has allocated most of that to anticipated unemployment benefits.

The coming budget package, the American Rescue Plan, is anticipated to include $350 billion in direct aid to state and city governments.

West Virginia is lined up to receive another $1.259 billion.

Justice, speaking to state and national reporters, has made it clear he wants the Biden administration and Congress to go big.

“Trying to be, per se, fiscally responsible at this point in time with what we’ve got going on in this country, if we actually throw away some money right now, so what?” the governor told CNN.

But in recent public remarks, the governor has also talked about setting aside what results from West Virginia’s federal relief.

His remarks have come in the context of his proposal to cut the state’s annual $2.5 billion personal income tax at least by half. Justice says population growth spurred by people drawn by the initial income tax cut will allow the state to then cut the rest.

The income tax represents about 43 percent of the state’s General Fund and pays for services such as education and healthcare.

If any unforeseen financial problems should arise, the governor has said, he would like to count on a reserve. And federal relief might be just the way to fill it.

Justice first described that earlier this month during his State of the State address.

Then, during a town hall about the income tax proposal, Justice answered a question about what he meant. He was also asked his view of whether his proposal is in line with the Biden administration’s intent.

Justice is describing building on that budget surplus. He’s envisioning the possibility of the federal government forgiving the money West Virginia has allocated toward unemployment, as well as reimbursement for pandemic-related costs.

With all that, and on the strength of millions of dollars in upcoming federal relief, West Virginia could have enough in the near term for the basics of operating government.

Any gravy could be set aside in what Justice calls a bucket.

Except all that coincides with his proposal to phase out the income tax, which accounts for almost half of the state’s General Fund. Justice has proposed several measures, including a sales tax hike and a new luxury tax as well as some cuts, to offset the income tax. But he acknowledges that might not be enough.

So the bucket might need to be on hand to fill a financial gully of his own creation.

One of the criticisms of federal aid to states is often described as a “blue-state bailout,” which refers to largely Democratic states like Illinois, New York and California that might benefit from the money to ease their strained pension programs.

“I am not a proponent of bailing out failed pension funds that have decades and decades of poor history,” Justice, a Republican, told USA TODAY. “But we should do things to address states’ and local governments’ needs that have happened because of this unbelievable pandemic. There are many needs within states.”

Justice told the national newspaper earlier this month that the federal government should not “cure past sins” of poor state financing but should help states “weather the storm.”

But a move to cut the state personal income tax against the backdrop of the millions of dollars in state and federal aid could be problematic too.

Some U.S. senators are concerned that some states could cut local taxes rather than spend coming federal relief on needs related to the coronavirus pandemic, The Washington Post reported this week.

“We could distribute billions to the states, and they turn around and lower taxes — there are governors talking about that, and it’s not the point here … there should be a prohibition against voluntarily diminishing revenues,” Sen. Angus King, I-Maine, told The Post.

The House bill says states are to use the money to:

Justice’s recent statements may contribute to questions about whether the states even need another round of federal relief, said Neal Osten, senior adviser for MultiState Associates, a government relations firm. Osten often consults on state tax policy programs.

“With the Governor’s comments about West Virginia ending fiscal year 2020 with a surplus and having a surplus right now for fiscal year 2021, I am not sure how he would leverage  funds from the federal stimulus package to cover revenue shortfalls due to the pandemic,” Osten told MetroNews.

West Virginia would be entitled to reimbursement for any funds spent to mitigate the pandemic not already paid for by the funds in the 2020 CARES Act, including reimbursing West Virginia for the extra $100 a week that the state agreed to pay unemployed workers under President Trump’s executive order last year, he said, but that was only for a short period of time.

That doesn’t even get to whether West Virginia could set aside even more federal money as a safety net for the income tax cut. That approach with the Coronavirus Relief Fund is a puzzler, Osten said.

“I’m not sure how the Treasury will regard CRF funds going into a “rainy day” fund to pay for a future tax cut which would be contrary to the purpose of the CRF,” he said.

Justice, speaking at his most recent town hall event, suggested using the federal relief to establish a “bucket” will be just fine.