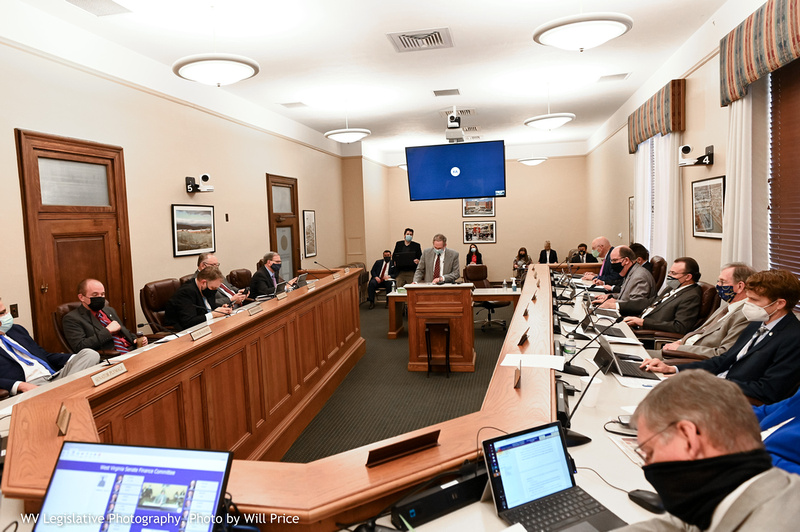 Members of the Senate Finance Committee gather for a meeting. (Will Price/West Virginia Legislative Photography)

A bill allowing families to use public money for private education costs is on the edge of passing West Virginia’s Legislature.

“I am very proud to support this bill,” said Senator Rollan Roberts, R-Raleigh, a pastor who is also administrator of the private school Victory Baptist Academy.

“I think the Hope Scholarship is a great bill that is going to help a lot of children.”

The Senate Finance Committee passed the bill on Thursday afternoon, even as questions persisted about the program’s long-term cost. The bill next goes to the full Senate. It has already passed the House of Delegates.

Democrats on the Finance Committee proposed several amendments aimed at controlling the cost and at ensuring the public dollars wouldn’t be used at schools with discrimination policies. The amendments were voted down.

House Bill 2013 would allow students leaving the public school system to use $4,600 for costs associated with private school or homeschooling. The bill also allows students old enough to enter the school system for the first time to be eligible immediately.

“I’ve heard some people say this is $4,600 that will follow the student and that means the school system will still receive the money when they don’t have the student there and the responsibility for educating them any longer. That’s not true, is it?” asked Senate Minority Leader Stephen Baldwin, D-Greenbrier.

Amy Willard, school operations officer with the state Department of Education, testified that school systems would lose the state school funding formula aid tied to students who leave the public system but that federal and local funding, plus grants, would be retained.

The first-year costs, as students leave the public school system, could be considered one-time.

But education savings accounts can quickly become costly for the state when families that would otherwise send their students to private schools or home school use the program to have the state pay part of the costs.

Starting in five years, the bill could allow students who are not leaving public school become eligible. Those are students who have already been attending private school or are homeschooling.

Those students would not have been counted toward the school funding formula in the first place, but they would receive $4,600 from the state.

“Since these students are not counted as part of the school aid formula, their scholarships would result in a net loss of public education funding,” Allen told senators.

“And if all 22,000 home school and private school students apply for the scholarship once eligible, that would be a recurring cost to public education of $101 million each year.”

The other route toward ongoing costs is that the bill is open to kindergarteners immediately, even if their parents would have homeschooled or sent them to private school anyway. That would compound year after year when a new group of kindergarteners becomes eligible.

“Given those factors, this bill is both the broadest and potentially the most costly ESA program in the country,” Allen said.