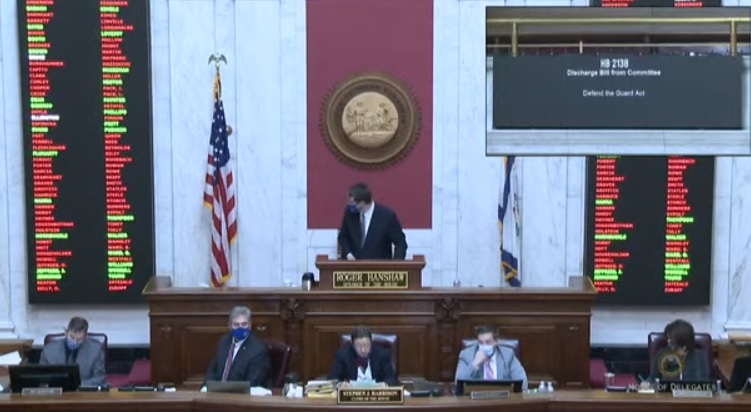 CHARLESTON, W.Va. — The proposed “Defend the Guard Act” will stay in the House Veterans Affairs and Homeland Security Committee where it has been since being introduced on the first day of the 2021 Regular Legislative Session.

On Friday, the state House of Delegates rejected a motion from Delegate Pat McGeehan (R – Hancock, 01) to discharge HB 2138 from the committee and send it to the House Judiciary Committee, its previously assigned second reference, in an attempt to get it moving.

That is probably it for the bill.

Delegate Roy Cooper (R – Summers, 28), chair of House Veterans Affairs, told delegates the bill would not make it onto the committee agenda before the end of this year’s session on April 10.

As written, the proposal requires Congress to make an official declaration of war or take action to call forth the state militia before members of the West Virginia National Guard could be released from state control to participate in active duty combat.

Del. McGeehan said he has introduced the bill for seven years now.

“We need to get back to some sort of sanity before we send our men and women in uniform into harm’s way overseas and put their lives in danger,” he said.

“This is a very important bill and, if our oaths of office are to mean anything, we need to get back to some objective standard.”

Last year, his discharge motion was defeated on a tie. The bill was later voted down in the House Judiciary Committee.

This year, legislatures in more than 20 other states are considering similar legislation.

As of Friday, under questioning, McGeehan said no states had passed such a measure.

Opponents have raised questions about whether such a bill would interfere with federal law or if it could result in financial penalties against states.

“This bill is misleading – if passed, it will defund, not defend, the West Virginia National Guard,” said Kanawha County Commission President Kent Carper.

The Guard employs thousands of people in full-time and part-time positions across West Virginia and operates two air bases in Charleston and Martinsburg, homes to the 130th Airlift Wing and the 167th Airlift Wing.

“When I signed up and when all of our members sign up to this organization, they understand there’s a commitment not only to the state but to the nation,” he said. “They’re always prepared to step up and do what needs to be done. That, to me, is what our service is about.”

During Friday’s debate on the motion to discharge, some delegates argued for allowing the bill to go through the normal committee process.