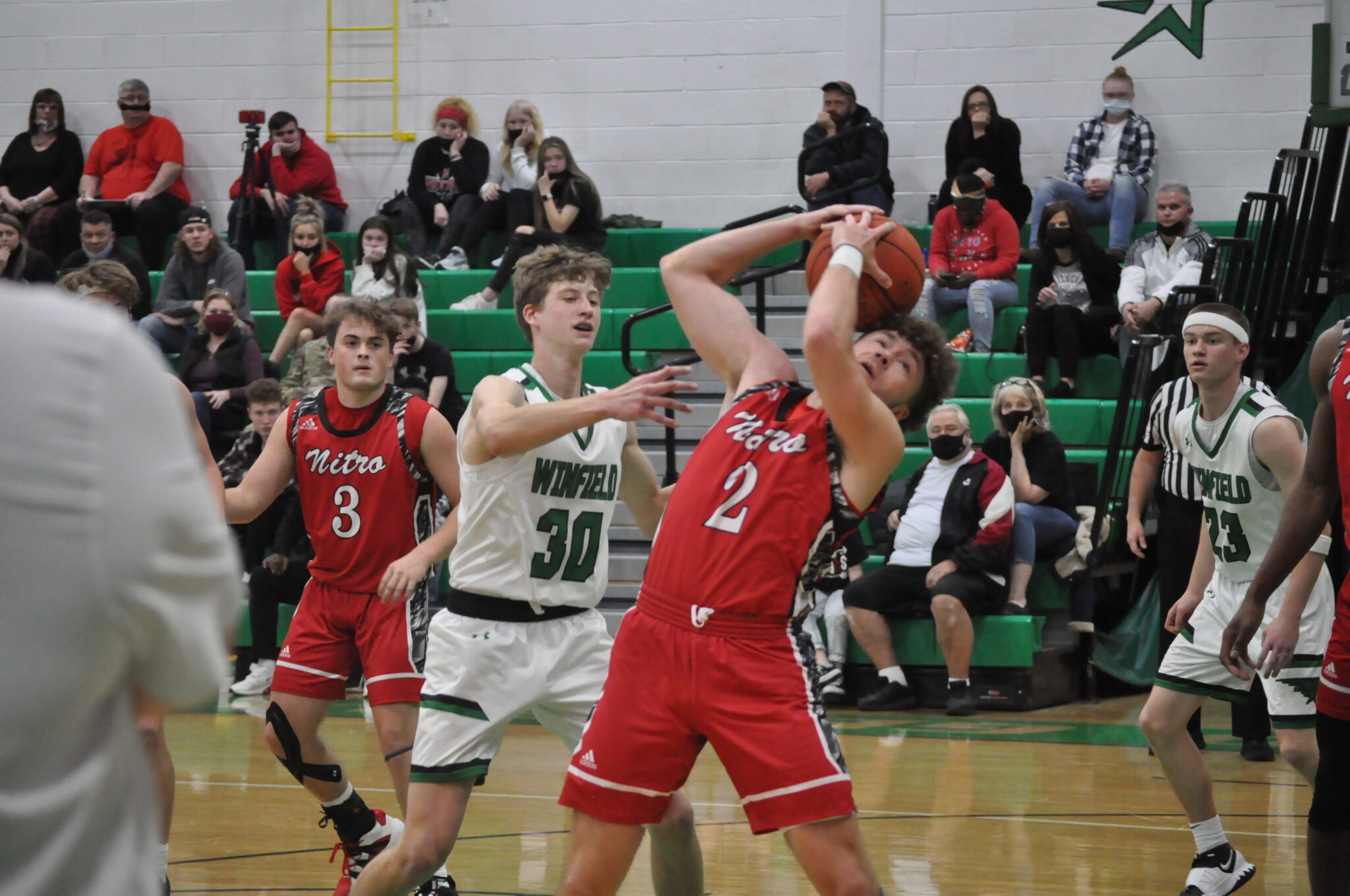 Nitro's Kolton Painter grabs a rebound during the Wildcats' win at Winfield. Photo by Greg Carey/WVMetroNews.com

WINFIELD, W.Va. — Well aware of Winfield’s late-game heroics in last Friday’s buzzer-beating win over Poca, Nitro coach Greg Lowe wasn’t about to let history repeat itself with the Wildcats leading the Generals by three and time winding down Wednesday.

After Nitro’s Kolton Painter made a pair of free throws with 3.5 seconds left, Lowe instructed his team to foul Winfield’s Blake Morris before he could get to halfcourt. Morris made the first of two free throws, before intentionally missing the second. Although the Generals’ Joey Gress came up with the offensive rebound, his tying attempt was off the mark, allowing the Wildcats to escape with a regular season sweep, 45-43.

“We did it when we were playing St. Albans and it worked out for us,” Lowe said. “I was trying to foul the possession before we did where they wouldn’t have gotten that three off and we didn’t get it, but we got it when we needed to, so it worked out.”

Winfield (7-5) staged a furious rally over the final 1:16 after sputtering offensively for the most of the quarter. A three-pointer from Cody Griffith trimmed the Generals’ deficit to 41-36 with 51 seconds to play. Painter then made 1-of-2 free throws, before Gress scored inside with 30 seconds remaining.

After Nitro (8-2) missed its second straight front end of a 1-and-1, Winfield’s Tanner Laughery split two free throws to cut the Wildcats’ lead to three with 15 seconds.

Painter made 1-of-2 free throws, but Morris answered with a triple with 4.5 seconds remaining, which set the stage for the tight finish.

“You give yourself a chance at least just exactly like we gave ourselves a chance with a steal in the Poca game,” Winfield coach Chris Stephens said. “We’ve gone over that play in years past. We’ve never actually had to run it. I don’t know if they could have executed it any better. We got a look at it.”

The Generals ran off 12 straight points in the opening quarter to build a 14-8 lead, but things went south in the second.

Nitro got three-pointers from Charles Robbins, Painter and Trevor Lowe to start the second quarter on an 11-0 spurt. Morris accounted for Winfield’s only two field goals of the quarter, the first of which didn’t come until 2:30 before halftime on a baseline jumper that cut Winfield’s deficit to 22-18.

“I challenged them at the end of the first quarter, because I thought they outplayed us,” Lowe said. “We came out and really did what we’re capble of doing in the second quarter.”

Nitro took a 27-20 lead into halftime and added to it early in the third on Lowe’s second triple of the contest.

But that proved to be nearly half the offense the Wildcats would produce in the quarter, and WHS responded with nine straight points to pull within one.

Nitro eventually got back 6-foot-9 Joseph Udoh, who had a pair of field goals late in the quarter to send Nitro into the fourth leading 34-31.

Udoh’s two free throws with 4:19 left stretched Nitro’s lead to five before Bryce Myers drained a timely three to make it a 41-33 lead with 3:07 left.

Winfield had just one field goal over the first 7:10 of the fourth quarter.

“The fourth quarter, we played as good of defense as we’ve played all year,” Lowe said. “Winfield has good shooters and it’s a rivalry game, so you throw everything out the window when you play these guys. They gutted one out.”

Udoh led all players with 16 points and 10 rebounds, helping key Nitro to a 37-28 rebounding edge.

Morris led the Generals with 13 points and was their lone double figure scorer. Winfield was held to 33 percent (17-of-51) shooting for the game.

“They played tougher than us in spots,” Stephens said. “That’s what we’ve struggled with most of the year is just finding the basket. I don’t think we played a great defensive game, and we still held them to 45. We have to find a way to put the ball in the basket and convert. Part of that is us and part of that is them. They have a couple long boys in there that can affect shots and keep us from scoring.”