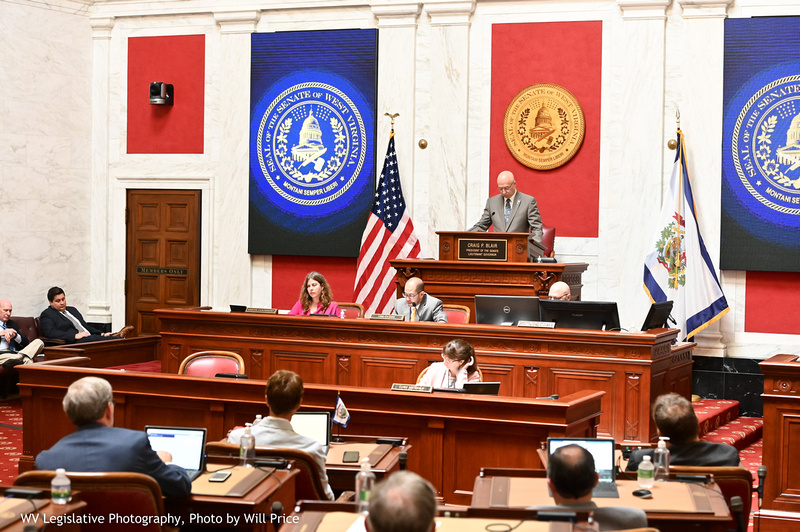 The state Senate gathers for a special session. (Will Price/West Virginia Legislative Photography)

West Virginia lawmakers approved the transfer of $150 million to support road maintenance work all over the state.

The approval took place during a brief special session today at the state Capitol. The session coincided with legislative interim meetings.

The additional highways money, which is being transferred from the state’s general revenue fund, received broad approval in both the Senate and House of Delegates.

Senators passed the bill 29-0 with five absences. Delegates passed it 91-5 with four absences.

“I think for two generations now we’ve gone with neglected maintenance and deferred maintenance on our roads and highways,” said Hanshaw, R-Clay.

“Any time we’re in a position to devote resources to shoring up and preserving and solidifying and even expanding infrastructure in West Virginia, we ought to do that.”

The governor anticipates the state budget being $400 million ahead of yearly estimates by the conclusion of the fiscal year. The allocation of some of that money for highways maintenance will now cut into that by $150 million.

There was really no debate about the priority in the Senate.

Delegates debated the idea for a while, with Delegate Marty Gearheart saying he supports investment in roads but also wants to be careful with government spending.

“I really do believe we need to improve our roads here, but it is somewhat odd that the money we have available is exactly the amount that highways has decided they need,” said Gearheart, R-Mercer.

Other delegates like Democrat Lisa Zukoff of Marshall County said they support whatever can be done to improve West Virginia’s roads. Zukoff, like some other delegates, just wished there was more for her district.

“It’s critical for the folks who live in my district and they want the money to fix the roads,” she said.