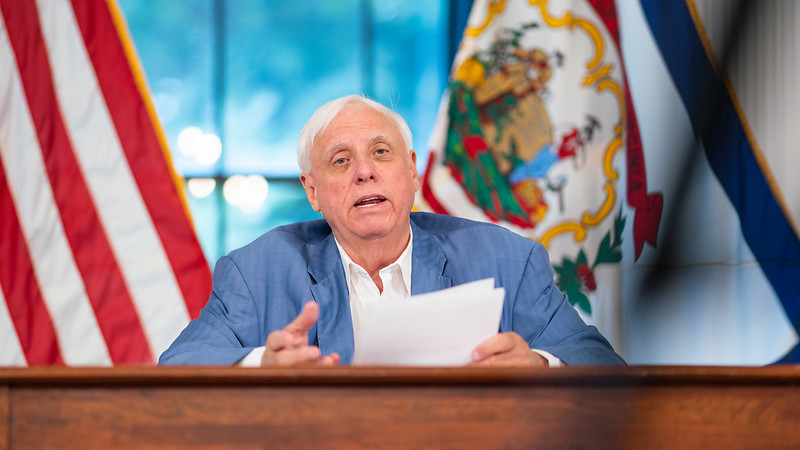 “If you’re insinuating in any way that I’m doing something to gain an advantage then shame on you. That’s all I’d say. Shame on you,” Justice said Thursday in response to a question. “I say it with great pride: I don’t want anything. The sooner you learn that, the better off we’ll be.”

The governor acknowledged last week that he has appointed his administration’s outgoing senior adviser, Bray Cary, to West Virginia University’s board of governors.

And Justice on July 7 appointed his administration’s former Lottery Commissioner Alan Larrick to the WVU board of governors, state records indicate.

Already on that board is Elmer Coppoolse, chief operating officer of The Greenbrier, the resort owned by Justice and his family.

Marshall University has begun a search for a new president and more top administrators, with a board of governors appointed entirely by Justice over the past few years. The governor is a Marshall graduate.

“People come to me with recommendations to the boards. I don’t talk to these people about what’s going on,” Justice said during a state briefing today.

“I don’t think I’ve ever had a conversation, period, with hardly anyone on a board. I let them completely operate on their own, and I’m not a player in that.”

“Will he resist the temptation to remake the school’s governance to reward his friends, or will he use this opportunity to move Marshall forward in ways that would make its peer institutions envious?” the editorial asked.

Marshall President Jerome Gilbert, who has led the university since 2016, announced this past April that he will not seek a contract extension. The early phases of identifying a new president have kicked off.

Marshall’s former provost, Jaime Taylor, has left to become president of Lamar University in Texas. And the athletic director’s position has been open since Mike Hamrick shifted to become special assistant to the president for facilities and fundraising.

“Directly or indirectly, Jim Justice will play a huge role in Marshall’s immediate future,” the editorial concluded. “He needs to step away from politics and self-interest and consider what is in the best interest of the university, this region and the state as a whole as his appointees work through the process of finding a president, a provost and an athletic director.”

Justice has gotten involved with Marshall before. In 2017, he pushed Gilbert to fire then-football Coach Doc Holliday and replace him with Justice’s friend and political supporter, ex-Marshall Coach Bob Pruett.

Holliday left this year after his contract wasn’t extended, with some national media reporting that Justice had played a role, along with the university’s board of governors. Marshall’s BOG chairman disputed involvement. Hamrick switched roles at Marshall just prior to the athletic director’s contract being up this summer.

At West Virginia University, Justice has issued a flurry of appointments in recent weeks — Cary on June 29, Martinsburg attorney Rick Pill on July 7 and then Larrick, a longtime Beckley resident like Justice, also on July 7.

Larrick, who was reprimanded by the state’s Lawyer Disciplinary Board for continuing work at his old law firm in violation of state law while serving as Lottery director,  was first appointed to Justice’s administration in 2017. He served until resigning in late 2018, just as sports betting was debuting in West Virginia.

All of the new appointees could be subject to hearings before the state Senate’s Confirmations Committee.

The committee’s chairwoman, Senator Donna Boley, R-Pleasants, said earlier this month that it wasn’t yet certain if Cary’s appointment would lead to a hearing. “I haven’t talked to my committee on this but we won’t be doing confirmations until interims and a special session in September,” Boley said.

Cary’s appointment would reunite him with current board of governors members Marty Becker and David Alvarez, who were among the investors in West Virginia Media Holdings, the media group that was led by Cary from 2001 until its sale in 2017. Another partner, Drew Payne, is chairman of the state Higher Education Policy Commission.

The WVU Foundation, where Cary served earlier, provided $7.75 million in financial support to help establish West Virginia Media Holdings in 2002, according to Foundation audits. The result was a $5 million loss for the foundation. The remaining $2 million share was sold.

Today, Justice said he has full confidence in Cary.

“I think Bray Cary will do a fabulous job. Bray is a guy that is just hungry for knowledge and just hungry for work — and works all the time. I thought he did a great job with us.”

Justice also addressed his longtime working relationship with Coppoolse and how that translates to representation guiding WVU. Coppoolse was named to the WVU board of governors in 2017 and then reappointed in 2018. He has been chief operating officer of The Greenbrier since 2016 while also serving as chairman of EMCO Hospitality, which manages The Resort at Glade Springs, another Justice property.

“If what you’re insinuating is that I’ve put a person on the board — and Elmer Coppoolse does a wonderful job as far as being a good business person, whether he was at Glade Springs or The Greenbrier or wherever he may be,” Justice said.

Justice said appointees like Cary and Coppoolse have earned the trust necessary for representation on such boards.

“Both those individuals are crazy in love with WVU,” the governor said, “and that’s what you really need. You really, really need just that.”