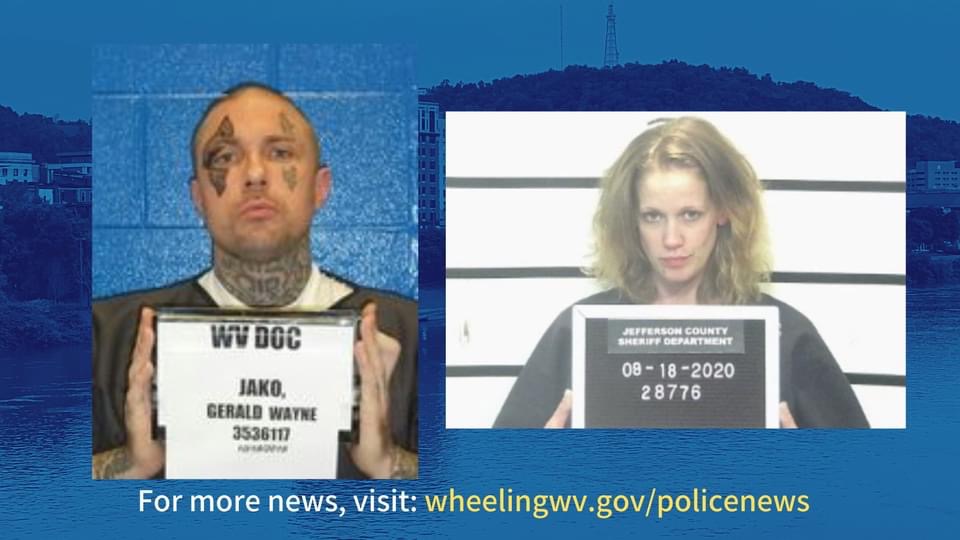 Gerald Wayne Jako, Jr., 36 of Wheeling and Dana Marie Bowman, 33 of Wheeling have been charged with three counts of murder and two counts of concealing a deceased human body.

WHEELING, W.Va. — Two Wheeling residents have been indicted by an Ohio County Grand Jury on murder charges in connection with a high-profile 2018 homicide case.

According to the Wheeling Police Department, the grand jury returned an indictment on Monday on Gerald Wayne Jako, Jr., 36 of Wheeling and Dana Marie Bowman, 33 of Wheeling on three counts of murder and two counts of concealing a deceased human body. The charges are in connection with the 2018 deaths Trevor Vossen, Lauren “LuLu” Jenkins and her unborn child. Jenkins was several months pregnant.

On Aug. 15, 2018, dismembered and burned human remains were found along Sullivan Road, a rural area in Raleigh County. The Raleigh County Sheriff’s Office investigated, and later that month, the West Virginia Medical Examiner’s Office confirmed the burned remains, identified via dental records, were Vossen and Jenkins.

Based on the investigation, Wheeling Police Chief Shawn Schwertfeger has said that detectives believe that Vossen and Jenkins were lured to a house in Wheeling, murdered, their bodies dismembered and then transported to Raleigh County to be destroyed by fire.

On June 25, Wheeling Police and the Ohio County Prosecutors office held a joint news conference to discuss details of the Aug. 13, 2018 homicide case in an effort to further the investigation.

Authorities believed that with Jako’s affirmed conviction earlier that month, people in the public with information would be more willing to come forward. According to the Wheeling Police Department, tips following that press conference led to effective information, which was presented to the grand jury that convened as regularly scheduled this past Monday.

“This week’s indictment means we are a step further in this case, but our work continues,” said Schwertfeger in a release. “Thanks to the ongoing support from our community and local news outlets, law enforcement successfully gathered additional information to obtain a grand jury indictment in this years-long case.

“Once again, I am extremely proud of the hard work and dedication of the Wheeling Police Department, the Ohio County Prosecutors Office, the Raleigh County, W.Va. Sheriff’s Office and our federal law enforcement partners.”

Bowman will return to West Virginia after an extradition hearing in Ohio. Both will be then arraigned in front of an Ohio County circuit court judge at a later time.