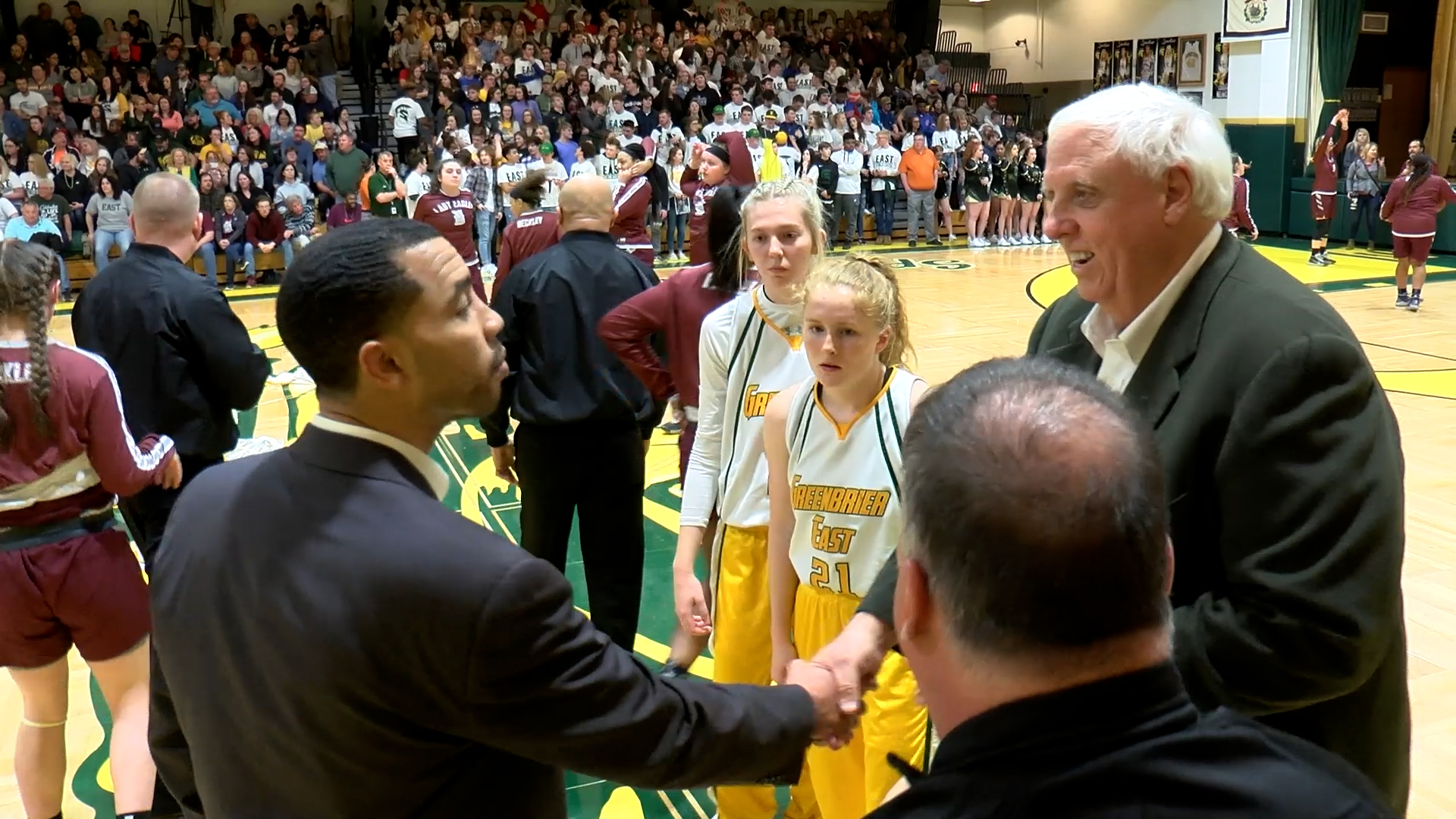 Jim Justice shakes hands at a game along with some of his girls basketball players at Greenbrier East.

Gov. Jim Justice has decided to bow out of the boys basketball coaching job at Greenbrier East High School.

The governor wrote in a withdrawal letter that he believes he was the most qualified for the job. “Nevertheless, | am withdrawing my name from pursuing the Head Boys’ Basketball Coach position. I refuse to spend time fighting HATE.”

After the Greenbrier County school board voted 3-2 against hiring Justice as coach, his lawyers filed a grievance. Board members made their vote without comment.

In today’s letter, the governor called the board’s position “vile.” He thanked supporters who spoke up for him.

“I understand that many of my players and supporters were at the Board meeting few. days ago. Additionally, I have received hundreds of calls from people in total disbelief and apologetic over the Board’s vile action,” the governor wrote in his letter.

The governor, who is also at the top of a sprawling business empire, said his feelings have been wounded over rejection in the coaching search.

“Does the hate of these Board members hurt? Of course, it does. When you love our school and community as I do — it really hurts. Could I have done a great job for the school and everyone of the kids? Without any doubt period. Always, my first responsibilities will be: the Governorship of our State, but with more hard work helping kids achieve goodness is something that I will never be ashamed of.”

Justice already coaches the girls basketball team at Greenbrier East, and his second term as governor lasts through 2024.

He coached the boys team at the high school starting in 2010 but announced his retirement from that team in 2017, his first year in office as governor. Former professional basketball player Bimbo Coles took over that year but now has departed.

The board first considered Justice’s candidacy for the boys basketball job August 10 but tabled the decision before voting against it later in the month.

Coaching two basketball teams in Greenbrier County would mean spending multiple evenings a week there during the legislative session.

To balance everything, Justice earlier told MetroNews he would need to rely on assistant coaches.

“At my age, I’ll have to have great assistant coaches. And to be perfectly honest, they’ll have to do the work. I’ll coach the game,” he said. “Nevertheless I love the kids. That’s all there is to it.”

Justice agreed earlier this year to a settlement that he would reside at the seat of government in Charleston, as the state Constitution requires.

Last week, a former legislator notified the governor of his intention to resume the lawsuit over the governor’s residency.

Former Delegate Isaac Sponaugle, a lawyer in Pendleton County, questioned whether it’s appropriate for the Governor of West Virginia to pursue a second high school basketball coaching job in Lewisburg.

“Jim Justice needs to decide what he wants to do with his time. He’s a part-time Governor, part-time businessman, and part-time basketball coach. The only thing that he’s doing full-time is residing in Greenbrier County,” Sponaugle stated while announcing he would resume the residency lawsuit.