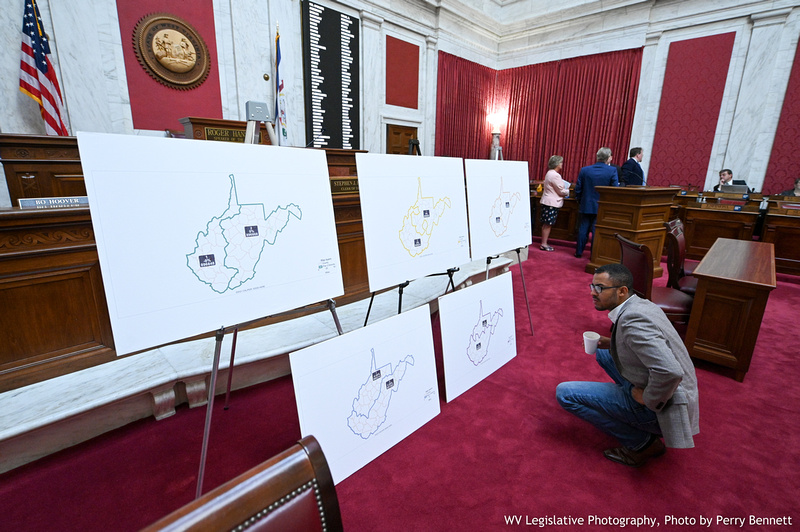 The state Senate’s redistricting committee met in the afternoon, unveiled six congressional maps as a starting point and debated what might be the best geographic split. In that debate, senators were divided not by party but instead by region — with senators from southern counties generally favoring a north-south split and senators from northern counties wanting to keep the growth areas around Morgantown and the Eastern Panhandle separate.

Meanwhile, more maps are coming. The Senate’s redistricting chairman, Charles Trump, thanked members of the public who have participated in this process so far and welcomed more participation.

“I’m hoping our discussion today is going to ignite a little bit of discussion and input,” said Trump, R-Morgan. “Send in your comments. Send in your evaluations of these maps.”

Redistricting is to occur every 10 years with the results of the new federal Census. West Virginia lawmakers are getting a somewhat late start because of delays of this year’s Census. As closely as possible, the redistricting process is to conform to the ideal of one person, one vote.

There are a couple of big factors in the ongoing West Virginia redistricting process.

One is that the state is losing one of its three congressional districts. There there has already been a lot of public discussion about how best to publicly split West Virginia into just two districts.

Senators spent most of their time today discussing how to best go about that.

Senator Mike Woelfel, D-Cabell, said it’s important for Cabell, Putnam and Kanawha counties be in the same district because of their longstanding economic and cultural connections. “Let’s keep in mind that southern West Virginia has a long way to go, and we see ourselves as a part of southern West Virginia. Dividing up those three communities — Cabell, Putnam and Kanawha — would be counterproductive to our economic development efforts.”

Senator Eric Tarr, R-Putnam, agreed. If southern counties wind up in a district with the growing Eastern Panhandle, he said, “the southern part of the state would probably never see a representative in Congress.”

Senator Rupie Phillips, R-Logan, chimed too. “War has nothing in common with Berkeley or Jefferson,” he said. “We’ll never see a congressman for the south if we split it right there. Don’t count the south out; we’re comin’.”

On the other side of that debate was Senator Dave Sypolt, R-Preston, who expressed concern that if the Morgantown and Eastern Panhandle growth areas wind up in the same district and continue to outpace the rest of the state in growth, then the resulting district could wind up growing out of proportion over the next decade.

“If these areas continue to grow, then you’re going to see a change in population between the two districts that would be disproportionate,” he said.

Senator Mike Caputo, D-Marion, agreed that he likes a split generally along the Interstate 79 corridor. “It keeps the I-79 Corridor intact,” he said.

The House also got a first look at six possible Congressional maps, with different options for splitting the state. They were submitted from various sources, such as one by interested citizen Thornton Cooper and another submitted by delegates Brandon Steele and Mick Bates.

The range of maps differ in population variance from just 10 people for one map up to 1,808 as the biggest difference for another. Delegates looked at the maps today but didn’t really discuss them during their meeting.

Delegates unveiled map proposals this morning but delayed making any decisions so there would be time for people to assess and discuss them. The House has posted its map proposals online.

A proposed map of House districts is displayed online in a Google Earth format as well as simple uploaded images.

Delegates on the House redistricting committee agreed to return at a later date to discuss the maps and make decisions.

The Senate’s redistricting committee did the same, with Chairman Trump suggesting the next meeting would probably be the middle of next week. Senators still need to explore possible maps of their own districts.

A special session is anticipated for the House and Senate to make final votes. Trump said a specific date of that special session isn’t settled yet, but is likely to align with regularly-scheduled legislative interim meetings that begin Oct. 10.

Trump said he wants to provide time for more maps to be submitted “and time for the public to be able to react to what we’ve got up.”

Trump noted, “There isn’t anybody to give a recommendation to until the Legislature is convened or soon to convene.”