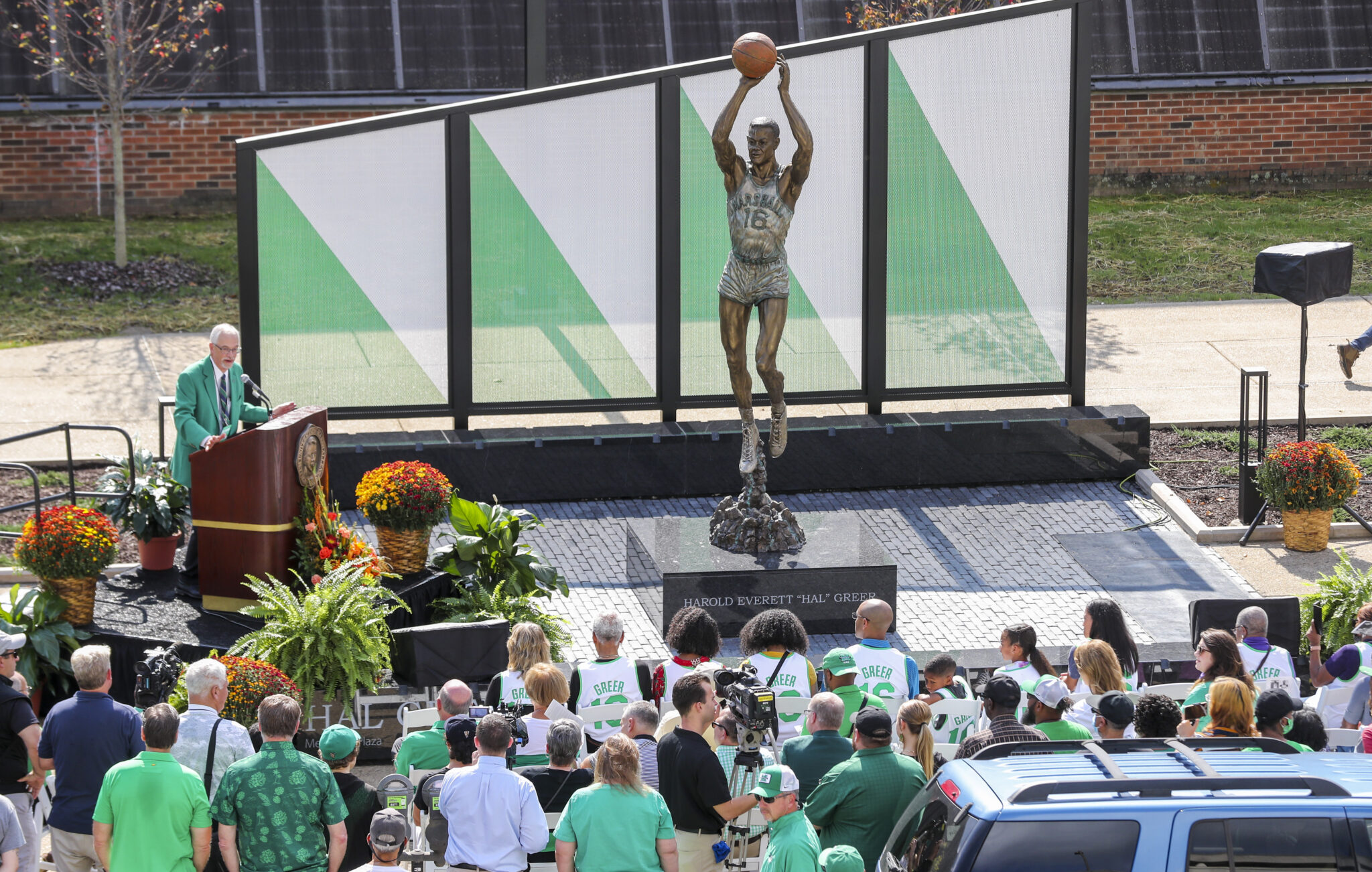 Marshall University President Jerome Gilbert speaks during a ceremony honoring the life of Hal Greer and to reveal a statue of him outside the Cam Henderson Center. Mandatory Credit: Ben Queen-USA TODAY Sports

HUNTINGTON, W.Va. — Something long overdue in the eyes of many finally came to fruition Saturday when Marshall University recognized Hal Greer for the impact he had on basketball and life in Huntington, at Marshall and in the NBA with the unveiling of a statue in his honor.

The statue located at 3rd Avenue and 18th Street in front of Cam Henderson Center portrays Greer in his No. 16 Marshall basketball uniform, rising from the ground with a ball in his hands over his head. The statue is part of what’s now known as Hal Greer Memorial Plaza.

Marshall interim athletic director Jeff O’Malley and Marshall president Jerome Gilbert each said the honor is long overdue. O’Malley and Gilbert were pleased to make it a reality and confirm the legacy of the man credited with breaking the color barrier in West Virginia collegiate sports.

“I think it’s very important, not only for Marshall University and Huntington, but for the state of West Virginia,” O’Malley said. “You’re talking about somebody who broke the color barrier in college athletics in West Virginia. You equate that to Jackie Robinson.

“He’s not only our Jackie Robinson, but he’s West Virginia’s. This is probably long overdue, but it’s a great tribute and it’s a great centerpiece for the city and something everyone should be proud of.”

“It’s very important for the African American community to see that Marshall University was a spot where a Black athlete could come in the 1950s to be welcomed to some extent and then go on to do great things,” Gilbert said. “It’s a great success story that talks to people about determination.

“We are paying homage to a legendary son of Marshall. Until now, we had not sufficiently recognized the athlete and the man Hal Greer — one of the greatest, if not the greatest basketball star in the history of Marshall.”

Greer played basketball at Marshall from 1954-58 and averaged 19.4 points and 10.8 rebounds per game in three varsity seasons. In 1956, he led Marshall to a Mid-American Conference Championship and the school’s first appearance in the NCAA tournament. He was named an All-American Honorable Mention in 1958 and was inducted into the university’s Athletics Hall of Fame in 1985.

Selected by the Syracuse Nationals in the 1958 NBA draft, Greer remained with the franchise when they became the Philadelphia 76ers in 1963. One of the league’s most dominant guards, he played in 10 consecutive NBA All-Star Games and was named the Most Valuable Player of the 1968 All-Star Game.

He was named to the Naismith Memorial Basketball Hall of Fame and voted one of the 50 Greatest Players in NBA history in 1996.

Saturday morning, Huff stepped off the Marshall team bus near Joan C. Edwards Stadium sporting a Hal Greer jersey to signify his support of the statue prior to his team’s homecoming contest against Old Dominion.

“I want to show my respect for his trailblazing steps,” Huff said. “I truly understand what Marshall University is all about. He made it possible for me to stand in this position.”

In 2018, the university selected Huntington native Frederick Hightower Sr., who is also a minister, to create the artwork, but COVID-19 created delays at the foundry. Completion of the 8-foot bronze statue was pushed back until this year.

“I wanted to make this statue symbolic of the obstacles Hal Greer had to overcome in his life and that is the base of the statue and how he soars above them,” Hightower said. “In a way it’s a personification of the success of all of us who grew up in the Fairfield community.”

Hightower’s statue resume includes a life-sized sculpture of NASA mathematician Katherine Johnson, which is featured on the campus of West Virginia State University in Institute.

Due to travel issues, Hal Greer’s wife, Mayme, did not make it to the ceremony. Family members filled in and told the crowd the statue is something they will treasure forever.

Greer’s daughter, Kelly, talked about her father’s determination no matter the obstacles he encountered.

“I’d say the No. 1 thing he taught us was to love what you do and persevere,” she said. “As long as you love what you do, just be very passionate and never give up. That’s what he did through basketball. He taught us to be resilient. My dad was very determined. Whatever he wanted, he would just go after it and get it.”

Marshall men’s basketball coach Dan D’Antoni told the audience, which included members of the current Herd team, the meaning of this moment cannot be overstated.

“I think it will remind our kids that you can have a home in Huntington, grow up in the streets of Huntington, West Virginia, live on the Marshall campus and be the best of the best,” D’Antoni said.

D’Antoni said Greer’s legacy and the opportunities he generated for athletes in West Virginia will live on.

“When they walk by and they see the beautiful statue, it’s a constant reminder that you can reach for the sky, keep your feet on the ground and be a good person while attaining all those goals,” D’Antoni said.

Both Marshall and the 76ers have retired jersey numbers 16 and 15 in Greer’s honor.