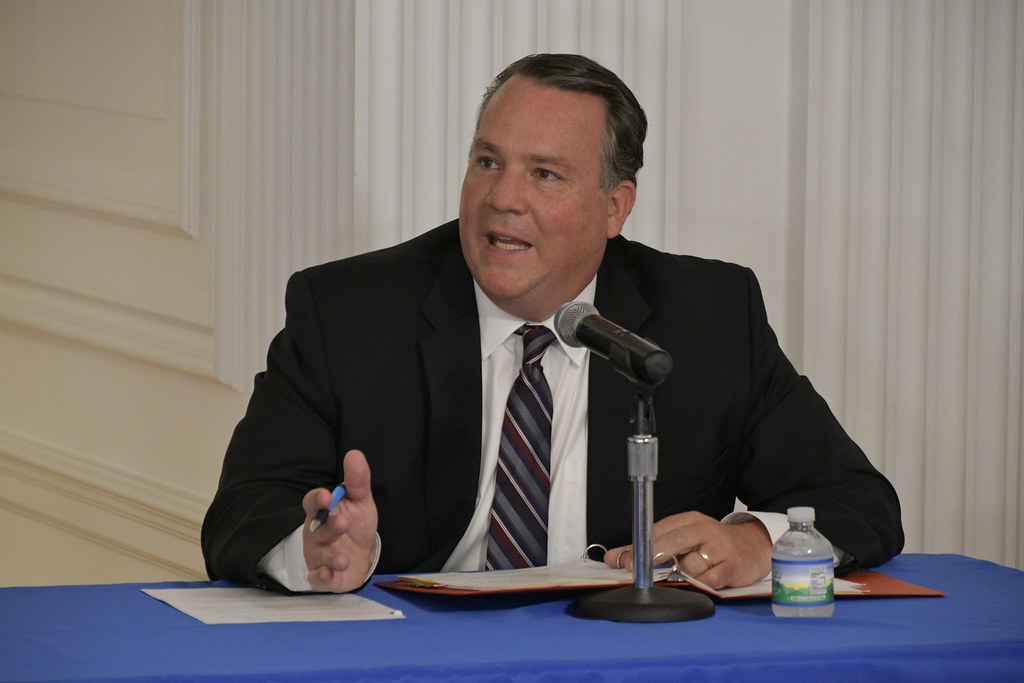 Congressman Alex Mooney says the recently-passed federal infrastructure bill, which would bring an estimated $6 billion in projects to West Virginia, is terrible.

“If we had held out on the House side and killed it, which we should have a couple of days ago, we would have gotten a better deal,” Mooney said today on MetroNews’ “Talkline.”

Mooney’s criticism focused estimates that the bill would add $256 billion to the national debt. He also cited several aspects of the bill focused on curtailing the effects of climate change.

“It certainly does have liberal priorities,” Mooney said.

Mooney had specific criticism of a pilot program to study a mileage tax. The objective is to assess alternatives to road maintenance as more people shift to vehicles that use less or no gasoline. “This is a dream program of the left,” Mooney said.

He was critical of an aspect of the bill that requires the U.S. Secretary of Transportation to establish a carbon reduction program to reduce transportation emissions.

And Mooney was critical of a “reconnecting communities” program meant to address the effects of highways that were built through minority neighborhoods, dividing them. Mooney characterized that aspect of the bill as funding to “rename racist highways.”

The bill would bring billions of dollars in investment to West Virginia.

In addition, there would be at least $700 million for cleanup of mineland property that was abandoned long ago. Similarly, money would be dedicated for cleanup of orphaned gas wells.

“As far as fighting for West Virginia goes, we could have done a lot better on this bill,” said Mooney, saying the state’s share is just a fraction of the overall total.

“If we would have killed this bill, we could have forced the Democrats in the House of Representatives to work with us, and we could have gotten a better deal. But we weren’t willing to do that. David McKinley and 12 other Republicans just gave it to them.”

Congressional incumbents McKinley and Mooney are on a collision course for the 2022 Republican primary in a newly-redistricted swath of northern West Virginia.

McKinley and the other House Republicans who voted for the infrastructure bill have been the targets of backlash from their GOP colleagues, including President Trump. The fallout has included speculation that congressional Republicans might strip committee assignments from the 13 GOP members who voted for the bill.

This week, McKinley threw shade at Mooney’s role as a Maryland state senator before winning congressional office from West Virginia in 2015.

“Just look at the bill. There is no pork. There is no liberal policy statements in it. It’s all infrastructure.”

“I was disappointed to hear Congressman David McKinley make it personal and attack me for moving here from Maryland. I think that was gratuitous and unnecessary. We should welcome people moving to West Virginia, not make fun of them.”

Capito, who played a key role in the bill’s crafting on the Senate side, today touted millions of dollars that could expedite the completion of Appalachian Corridor H, millions of dollars for bridges, transformation of bottlenecks, and investment in rural roads.

“I stand by my vote because West Virginians, we know that modernizing our highways, extending our broadband, cleaning up our drinking water and taking care of our wastewater, modernizing our airports, using money for abandoned minelands, capping off our abandoned oil and gas wells, these are all good things,” she said.

“I know that roads and bridges and all the things we’re talking about are things that we all agree on and that we know we need. I’m really proud of my vote because I think it reflects what West Virginians want and need.”

U.S. Route 35 will be dedicated later today for the final stretch of the four-lane road. @SenCapito explains to @HoppyKercheval what this moment means for the construction of this road. WATCH: https://t.co/yCFQ3nDJuy pic.twitter.com/KL0ft0ybhA

The governor praised members of the congressional delegation, like McKinley, who voted for the infrastructure bill — while also saying he understands why the others wouldn’t.

“It took a lot of guts for David McKinley to step up and vote for this. He really knows how valuable this is for West Virginia,” Justice said.

But the governor expressed concern that the infrastructure bill, which  has passed, could somehow open the door for the social safety net bill that is separate and still under consideration.

The governor seemed to conclude that a vote for roads, bridges, clean water and broadband is the most beneficial position for the state.

“We thank Congressman McKinley, we thank Senator Capito, we thank Senator Manchin. It was a difficult vote. I understand both sides of it,” Justice said. “But we’ve got to first and foremost watch out for our home state.”