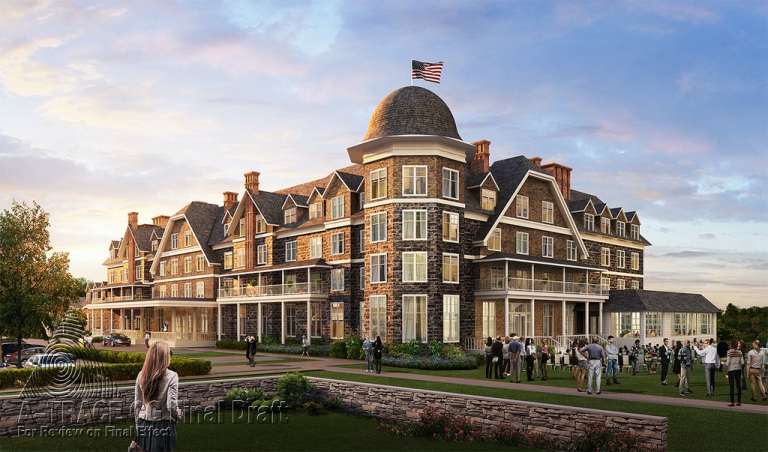 An artist’s rendering shows how renovation of the Hilltop House Hotel may turn out. (SWaN Hill Top, LLC),

Harpers Ferry Mayor Greg Vaughn is looking forward to watching the resurrection of a $150 million hotel that has been discussed for a decade.

“I’m looking forward to the first truckload of debris leaving that site. I think many, any other people are also looking for that to happen. I think that will be a positive step and hopefully things move along productively and this becomes reality in a year and a half or two years when somebody can cut the ribbon up there,” Vaughn said.

The Hill Top House Hotel, a centerpiece of discussion for years, has a more clear path forward with this month’s announcement that the developers have chosen a company to oversee construction and redevelopment.

JLL Hotels & Hospitality Project and Development Services has been selected to spearhead the project atop a bluff overlooking the confluence of the Potomac and Shenandoah Rivers. The hotel is expected to open in mid-2024.

Harpers Ferry is a beautiful location, just a short drive for travelers from Washington, D.C., who want to enjoy the accompanying national historical park or a hike along the Appalachian National Scenic Trail. The area also brims with history as the site of abolitionist John Brown’s raid on the United States arsenal prior to the Civil War.

But an attraction the area has been lacking, Vaughn noted, is a hotel worthy of those attributes.

“We’re one of the smallest municipalities in the state of West Virginia,” he said. “But obviously we’re probably the most visited tourist destination in the state, where our population expands to tens of thousands during the week. But having that hotel there and the tax base from the hotel will be a tremendous opportunity for this very historic town to take on some projects that we have deferred for decades because of lack of funding.

“So this is important for the community, not only financially, but also the prospect of where the location of the hotel is to be enhanced for visitors and those that may choose to stay at that wonderful site. So I am really anxious for this to get underway.”

Hill Top House Hotel will be developed as one of West Virginia’s Tourism Development Districts. That initiative, passed in 2020, enables the state Development Office to help small towns with big tourism projects.

The Hill Top House Hotel, a $150-million destination in the historic gateway to West Virginia, is the first of five allowed districts.

“Thank you to the state of West Virginia for being so forward thinking,” said Karen Schaufeld, who is leading redevelopment of the hotel property along with her husband, Fred, and their SWaN Investors company.

The hotel will be operated by Evolution Hospitality, and José Andrés’ Think Food Group will steer the food and beverage program.

The mayor credited the Schaufelds for their vision and sustained interest.

“I feel very comfortable knowing how historically-minded and knowing how community-minded both of them are for Harpers Ferry,” Vaughn said.

Hill Top House was built in 1888, opened by Thomas S. Lovett, an African American entrepreneur who was born in slaveholding Virginia five years before the start of the Civil War.

The hotel burned down twice and reopened twice and continued until 2007 when the current ownership group, SWaN Investors, bought it and closed it because of poor structural integrity.

In 2009, the SWaN investors announced intention of rebuilding and reopening the hotel.

For years after that, the project progressed only on paper.

“This has been languishing. I just think it’s time to move beyond the divisiveness in this community and move this project forward,” Vaughn said.

A major obstacle was the streets around the hotel. The developers propose using not only the land where the hotel now sits but surrounding properties also under their ownership too. Doing so would make the development a cohesive hospitality destination.

But because Hill Top House is in a residential area, the streets surrounding it are public property.

“The biggest step is that we came to agreement with the town to buy the streets on our property,” Karen Schaufeld said.

Another issue was the scenic overlook, which has been a valued public space even for people who might not stay at the hotel. The developers have agreed to maintain public access to the sweeping view.

“It’s almost like you’re holding something in trust for the public. That’s always been part of our plan,” Schaufeld said this week on MetroNews’ “Talkline.”

Karen Schaufeld and her husband, Fred, are reconstructing the Hilltop Hotel House in Harpers Ferry. Are they at the point where they can deconstruct what is left and begin reconstruction? She explains it all to @HoppyKercheval. WATCH: https://t.co/yCFQ3nDJuy pic.twitter.com/a6zXoc3xsw

The hotel has fallen into disrepair, but the Schaufelds intend to use some of the materials that are left while also reflecting its history as it is refurbished.

Vaughn referred to stones that have been gathered from a wall surrounding the hotel. “They’re going to repurpose those stones and put them right back in a similar location,” he said.

Additional recovered materials, Schaufeld said, include mirrors that were used by brides, an old piano and old furniture. Additionally, photos of the exterior from about 1914 will help recreate the early look of the hotel.

“This is such a compelling project and we’re so passionate about it. Harpers Ferry is where history happened,” Schaufeld said.

“Anything worth doing is often hard. For us it was compelling. And we believed it would be compelling for a lot of people.”