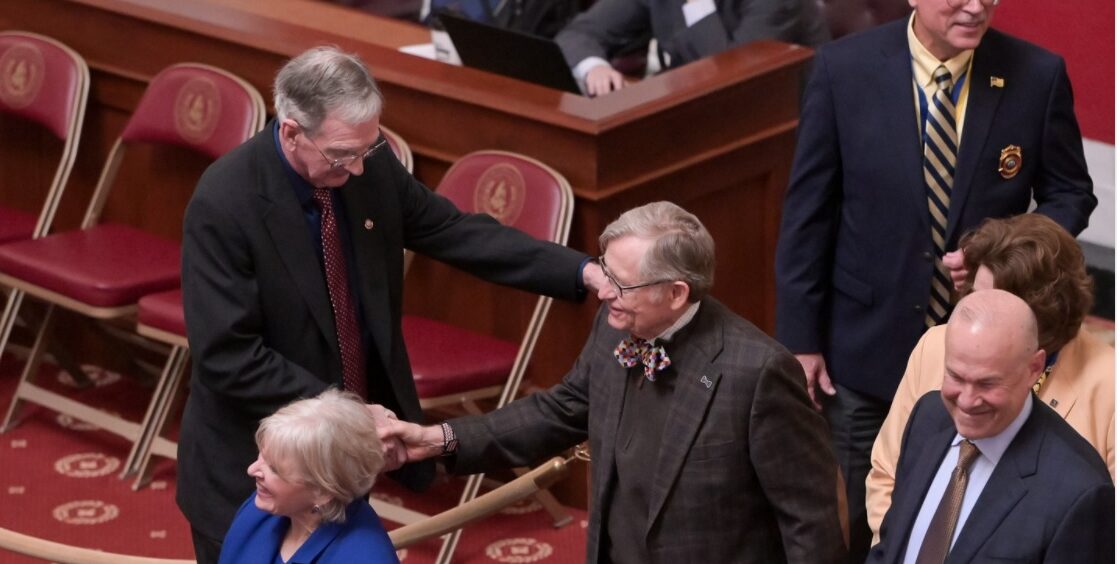 WVU President Gordon Gee during a previous visit to the state Senate. WV Legislative Photography, Photo by Will Price

CHARLESTON, W.Va. — Leadership in the Republican-controlled state Senate and House of Delegates came out in support of WVU President Gordon Gee Monday a few hours ahead of a WVU Faculty Senate meeting in which a ‘no confidence’ vote was scheduled to be taken.

Senate President Craig Blair said during an appearance on MetroNews “Talkline” that the Senate Republican Caucus signed off on a resolution in support of Gee.

“To have a vote of no confidence on this man, we believe, is the wrong approach,” Blair said. “It sends the wrong message not just in the state of West Virginia but throughout the world.”

“He (Gee) has shown that he does not see a university as a think tank isolated from the state around it. He sees the university as a dynamic part of every community it serves, and has aggressively pursued every opportunity to grow its footprint,” Blair said. “We believe Dr. Gee is a leader who cares deeply about the students and faculty he serves and respects their abilities as adults to make their own decisions regarding their health and safety.”

It sounds like the support for Gee among GOP delegates came in a less formal manner than their Senate counterparts. House Speaker Roger Hanshaw said there was no formal vote among House Republicans but he said a majority of the caucus supports Gee particularly his efforts at WVU when it comes to helping the state create jobs.

“We just wanted to be sure as the leaders of our state’s legislative branch that President Gee understands that we appreciate that support. We appreciate the role he’s playing in helping us advance the goals we all share in growing the economy in West Virginia and we want the world to know that,” Hanshaw said.

The WVU faculty and senate will meet today to vote on a resolution declaring no confidence in President Gordon Gee and Provost Maryanne Reed. @CraigPBlair and @SpeakerHanshaw talk about their support of President Gee and Provost Reed to @DaveWilsonMN. https://t.co/yCFQ3nEhk6 pic.twitter.com/qpnCgXjjoS

Hanshaw did admit some of the issues the WVU Faculty Senate was scheduled to discuss were ‘inside baseball’ campus issues. Hanshaw said he personally didn’t want to get involved in the day-to-day operations on campus but believed the public support for Gee was necessary.

“The vote is taking place in a public, high-profile manner and we wanted to make sure we are responding in an equally appropriate manner,” Hanshaw said on “Talkline” Monday.

The Faculty Senate resolution addresses multiple concerns with the current leadership, including the refusal to mandate coronavirus vaccinations, the institution’s Academic Transformation process and hiring practices.

Administrators refused to require people to get vaccinated for the coronavirus despite support from the WVU Faculty Assembly, the WVU Student Government Association, and the Faculty Senates of WVU and Marshall University.

Gee told the WVU Faculty Assembly in September he did not believe a mandate would work, adding such action would “only create more division.”

The Faculty Senate meeting was set to start at 3:15 p.m. Monday.