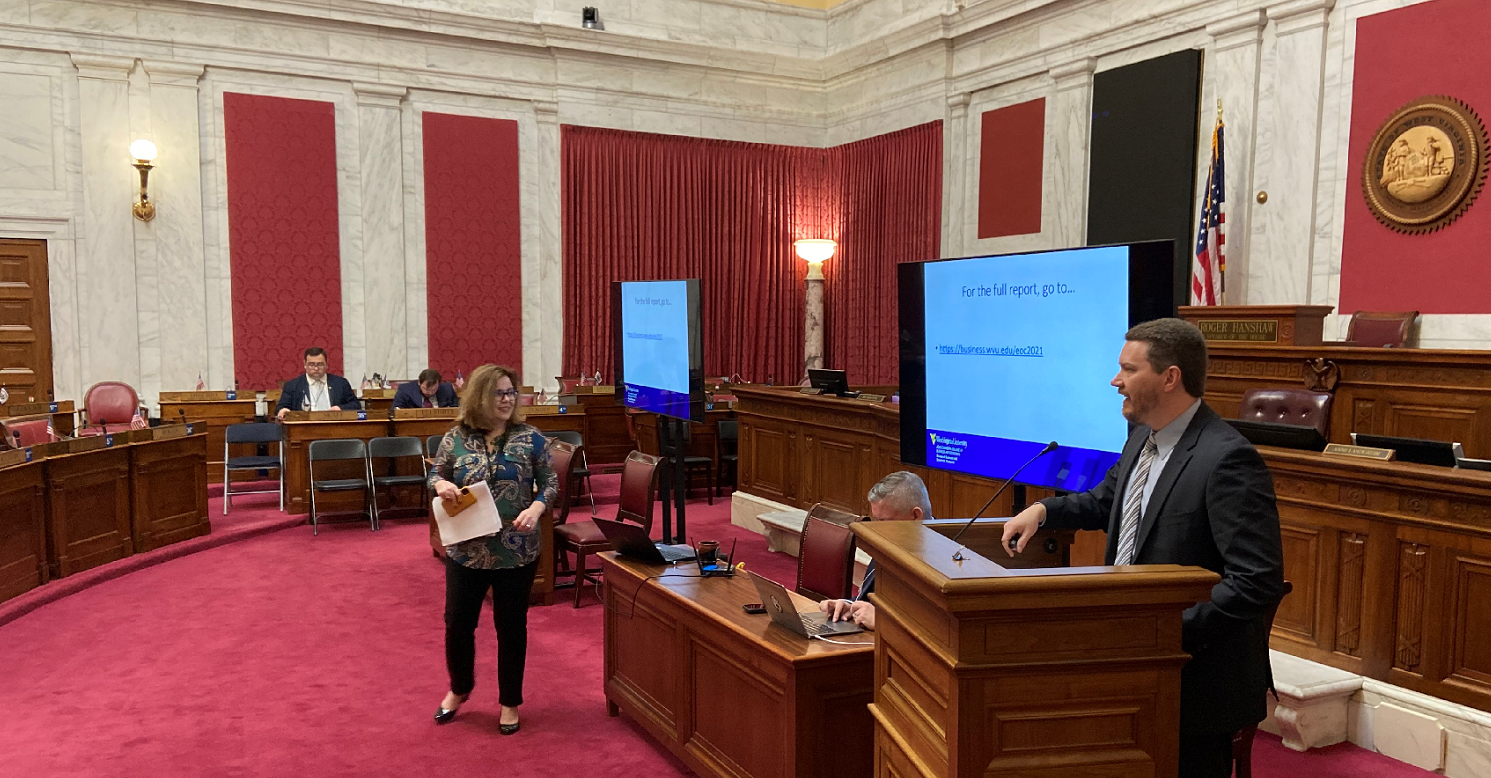 John Deskins, an economist at West Virginia University, presents an outlook to lawmakers.

“The recovery so far has been faster than I would have expected,” Deskins said during a presentation today in the House of Delegates Chamber. But, he cautioned, “We’re not fully out of the woods with the covid recession.”

The category of financial activities, in contrast, is at 101 percent of where it was pre-pandemic.

“Never would I have thought we’d have seen this much recovery,” Deskins said.

On the whole, that is good news. But the unemployment rate measures people who are actively looking for work and not those who have withdrawn from the job market.

“I will say, though, that most of that improvement has come from people who were laid off who have gotten new jobs,” Deskins noted. “But some of the improvement in the unemployment rate has come from labor force attrition.”

“Seems like a lot of those people left the workforce and just retired early,” Deskins said.

Delegate Mick Bates, R-Raleigh, asked about a gender breakdown of that statistic. “Some families have had to make tough decisions about who’s going to take care of the kids,” Bates said. Deskins agreed that is a situation faced by many families but didn’t have gender data on hand for those who have left the workforce.

Inflation continues to be a national problem that also affects West Virginia pocketbooks.

Deskins attributed the problem to workforce shortages as well as to changing consumer habits. During the pandemic, many people spent less money on services such as dining out and travel and more on goods. “Producers were not prepared for this,” Deskins said.

“Those kinks are going to work themselves out,” Deskins said.

Deskins advised state leaders to consider strategy for continued economic success, including education and health conditions for the workforce, site preparation for development opportunities, thinking regionally about the strengths of different areas of the state and the unprecedented opportunities of federal dollars.

House Speaker Roger Hanshaw, R-Clay, asked about preparing workers through associates or two-year degrees. Deskins praised a bill passed a couple of years ago to make community college more affordable but said the pandemic has made it hard to assess the results.

Other lawmakers, like Senator Owens Brown and Delegate Kayla Young, both Democrats, asked about the effects of the programs withing President Biden’s Build Back Better platform, which has stalled in Congress.

Deskins said he had not studied the particulars of Build Back Better, which is a broad umbrella of policy proposals. But he advised the state to be strategic about its use of millions of federal dollars, including money from the bipartisan infrastructure bill.

“We are experiencing an unprecedented wave of federal month coming into the state,” he said.