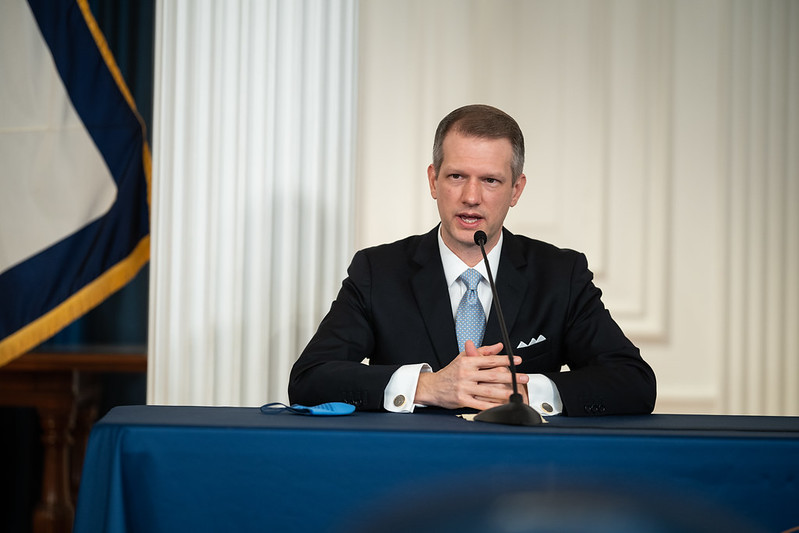 In recent days, West Virginia Treasurer Riley Moore’s name has been all over the financial coverage in Bloomberg‘s business reporting, The Washington Post and The Wall Street Journal.

On Wednesday night, Moore was in a political spotlight on Laura Ingraham‘s nightly opinion show on Fox News.

The buzz has been about Moore’s position to block banking West Virginia’s public dollars with financial institutions hedging against fossil fuel investment.

“I applaud your efforts,” the opinion host commented. And she concluded the segment by saying, “It’s inspiring. Thank you for doing what you’re doing.”

On Thursday morning, Moore was before a different audience, the Senate Finance Committee, to push for a bill laying out the path to withhold state deposits from those bankers that steer clear of investments in fossil fuel companies.

While the political argument has sizzle, Senate Bill 262  is mostly process. It authorizes the Treasurer to compile a list of companies with policies against investments in fossil fuel industries like coal or gas.

Then, the Treasurer could use the list to disqualify companies for banking contracts. Moore noted this would not apply to investments or pension funds, but would apply instead to more routine deposits of state funds. That amounts to about $8 billion, the Treasurer said.

Moore acknowledged he could do that without a law, but said the bill and the resulting list would provide greater transparency about what the Treasurer’s Office is doing.

The bill uses the term “boycott” to describe the actions of some investment companies.

Senators who discussed the bill tried to differentiate how it would treat financial companies making a societal judgment about carbon-producing industries as opposed to companies that make purely financial decisions about whether coal or gas are solid investments.

Or what about gray areas, where financial analysts assess the winds against carbon as gambles for investors?

Senators asked if anyone from the banking industry was in the room to provide testimony, but there was no one.

“Have we actually seen a policy in writing from these companies saying they will not do business with energy companies here in West Virginia?” asked Senator Owens Brown, D-Ohio.

“Yes,” Moore responded. “There are a number of large financial institutions that have put out policy frameworks that state they are going to outright prohibit financing, presumption of denial, to the fossil fuel industry.”

This is all against the backdrop of a controversy that hit the financial world this week about the investment philosophy of the financial giant BlackRock.

Moore named BlackRock repeatedly in the interview with Ingraham. “We’re not going to pay BlackRock to destroy our industries,” he told the host.

BlackRock’s chief executive this week defended strategies with a focus on climate, but BlackRock’s position has been to engage with companies on carbon transition, rather than divesting from those companies.

BlackRock chief Larry Fink wrote in an annual letter to corporate leaders that the company has a fiduciary responsibility to engage with companies about the shifting tide of climate. But the letter explicitly stated that BlackRock itself is not divesting from carbon producers.

“Divesting from entire sectors – or simply passing carbon-intensive assets from public markets to private markets – will not get the world to net zero. And BlackRock does not pursue divestment from oil and gas companies as a policy,” Fink wrote in the letter.

“If they’re not going to comply and meet our standards in terms of our energy industry here in West Virginia, then they can go do business elsewhere,” Moore told Ingraham.

Much of that likely reflects index funds offered by the financial company.

The savings managed by the West Virginia Consolidated Public Retirement Board, which would not be subject to the law under consideration, nevertheless have substantial investments in BlackRock funds.

Moore told the senators that he has pursued the policy because energy producers are worried they’ll be frozen out of the capital they need to build for the future.

“Coal operators and gas companies had approached my office, and they’re scared to death they’re going to lose access to capital,” Moore said, noting that the state relies on those companies for severance tax dollars.

“We’re just trying to comport our banking contract process with what we view as very important industries to the state of West Virginia and our economy writ large,” he said.