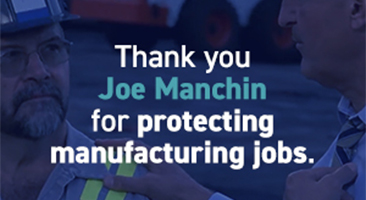 Over the last year, the media has said many things about Senator Joe Manchin. They’ve wondered if he truly is representing our state and if his priorities are in the right place. Let me tell you about the Joe Manchin I know, the Joe Manchin West Virginia knows.

Since 2010, Senator Manchin has been a strong advocate for West Virginia families and the policies that help our economy grow. He knows a strong economy provides more opportunities and allows communities to prosper. But today we’re experiencing an uncertain and unstable economy. With inflation jumping 7% in the last year, we’re all feeling the squeeze of rising prices. From groceries to gas to utilities, prices have increased sharply, forcing families to make tough choices.

As we’ve seen, what happens in Washington has a major impact on the state of the economy. That’s why we’re lucky to have Senator Joe Manchin, an ally to West Virginia businesses, representing us there.

Manchin supports policies that spur innovation and stimulate the economy. He’s worked hard to bring new investments to our state and has fought for good-paying jobs. He’s said “no” to new taxes on hardworking West Virginians and out-of-control spending.

He supports small businesses and West Virginia’s strong chemistry manufacturing industry. This critical industry is the largest manufacturing industry in the state, impacting over ten thousand jobs and an average industry salary of over $92,000. In total, the West Virginia chemistry industry generates $50 million in state and local taxes and ships over $1 billion in products across the world.

A strong economy isn’t Senator Manchin’s only priority though. He’s worked with members from both sides of the aisle to combat the opioid epidemic and he’s defended our mining industry, which has provided a livelihood for so many of us.

For all of this, I want to say thank you to Senator Joe Manchin. Thank you for fighting for economic opportunity and opposing onerous regulations. Thank you for believing in us and the potential of our state. Thank you for defending our way of life.

People outside our great state are entitled to their own opinions, but here in West Virginia we know Joe Manchin and we’re grateful for him. He’s demonstrated time after time, year after year, that we are his priority and he’ll continue to have our backs. He knows what West Virginia needs and he works tirelessly to deliver on our behalf. Keep up the good work, Senator.

By Rebecca McPhail. McPhail has served as President of the West Virginia Manufacturers Association since 2013.