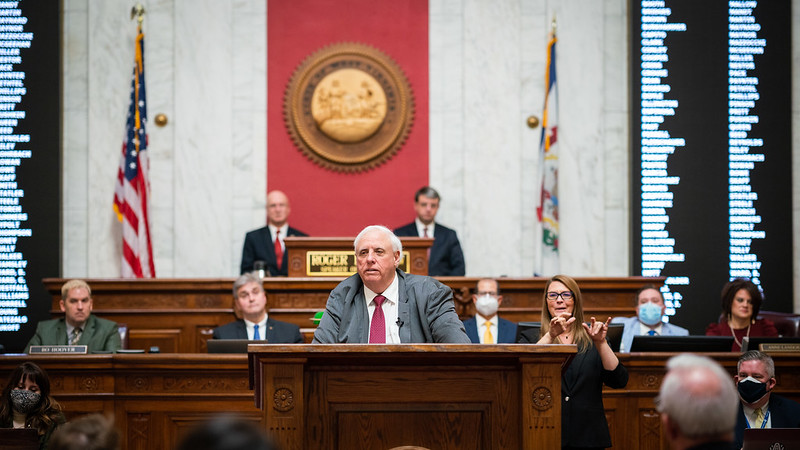 Financial proposals circulating at the Statehouse could wind up collapsing under the weight of their own competition, through the restraints of federal guidelines or because of dawning fiscal reality.

Gov. Jim Justice’s proposed pay raise of an average 5 percent for most state workers is the best bet. Leaders of both legislative chambers have endorsed the proposal, and the Senate Finance Committee discussed and quickly passed a corresponding bill this afternoon. That’s an estimated $71 million cost.

But the governor’s accompanying bonus for state employees — dubbed “Inflatocine” because it’s a vaccine for inflation — isn’t a sure shot after the House Finance chairman doubted its support among delegates this week.

Meanwhile, an income tax cut proposal moving in the House of Delegates may be in doubt over whether it would run afoul of guidelines that federal relief dollars can’t be translated into permanent tax cuts. Both the House Speaker and governor have raised that question in different venues this week.

A sales tax cut advocated early in the session by Democrats from both chambers fell into the realm of “unlikely” when the Senate president threw cold water on the idea. Anything passing in the GOP-dominated Legislature would need Republican support.

And all this is up against a ballot measure this fall that would give citizens a say-so on whether future legislatures can tinker with property taxes. Right now, property taxes are embedded in the state Constitution, so any ability to change them requires a vote of citizens.

HOPPY KERCHEVAL: What to do with WV’s Budget Surplus?

Governor Justice called for a relatively flat state budget this year, again. Even so, there are a lot of moving parts and big ideas.

What’s in short supply is consensus.

“It seems that various tax cut proposals and budget needs are being considered independent of one another despite the fact they would have major cumulative impacts on our ability to provide basic public services,” said Kelly Allen, executive director of the nonprofit West Virginia Center on Budget & Policy.

“Tax cuts passed this year with one-time money will need to be offset again and again in subsequent years, likely requiring nearly immediate tax hikes or budget cuts to offset them.”

She questioned whether any of the tax cut ideas could be sustained given financial pressures on the state. She added up a proposed transfer of $139 million from Medicaid surplus this year and an estimated annual impact of $265 million from the proposed income tax cut.

“And that doesn’t even begin to consider if the state eliminates any property taxes and has to reimburse school districts because of the school aid formula and other legislative priorities that cost money.”

During his regular briefing today, the governor was asked about the possibility of an income tax cut floated by delegates this week. Justice questioned whether it’s feasible.

“No one’s talked to me about anything whatsoever,” Justice said in response to a question by Mark Curtis of Nexstar Media stations.

But the governor said, “We’ve got to be sure that we don’t do anything that basically prohibits us from taking advantage of these federal dollars that are coming to us in all these stimulus packages.”

Justice said he does like the concept, noting that last year he made a major push to swiftly eliminate the income tax, which would have been offset by increases in other taxes. “I stand ready to discuss any proposal because getting rid of the state income tax in West Virginia would be an absolute milestone that would drive a lot of folks to West Virginia,” Justice said.

House Speaker Roger Hanshaw, R-Clay, also acknowledged the same concern about federal restrictions. In an interview with The Charleston Gazette-Mail, said officials need to assess whether there could be repercussions. “As soon as we’ve done that, we’ll be able to consider whether we can pass the bill,” Hanshaw told the newspaper.

The House Finance Committee earlier this week passed House Bill 4007, which would prompt an initial 10 percent cut for each bracket while also establishing a savings fund for possible future cuts.

In describing the income tax bill, House Finance Chairman Eric Householder said he would rather provide broad tax relief for West Virginia citizens rather than embrace the governor’s proposed bonus for state employees. “Inflatocine” is envisioned as a one-time 2.5 percent bonus.

“I do not support it, and right now there’s no appetite on the House side to even run that bill,” Householder said this week on MetroNews’ “Talkline.”

“I keep arguing and advocating, ‘Hey, let’s give pay raises to all West Virginians. I mean, there’s a lot of people who have been working through this pandemic. We’re all seeing higher prices at the pump, higher prices when we buy our groceries, so let’s give all citizens a pay raise, and you do that by tax reform.”

The estimated cost of “Inflatocine” is about $58 million. Householder, R-Berkeley, said an alternative way to use that money could be locality pay for crucial positions in competitive border counties.

Early in the legislative session, Democrats from both chambers announced their support for lowering the state’s consumer sales tax from its current 6 percent down to 4.75 percent.

“This proposal would give us the lowest sales tax in the region, and that would give us an advantage over surrounding states,” Senate Minority Leader Stephen Baldwin, D-Greenbrier, said at a Jan. 18 news conference.

But in a statewide radio appearance shortly after that, Senate President Craig Blair said he could not support that cut because of the many out-of-state visitors who travel through the state and pay the sales tax. “It’s bad economic policy for the people of West Virginia.”

“The sales tax has a problem with it, and that is if you reduce it, what you’re doing is you are reducing it for the people who come through for tourism,” Blair, R-Berkeley, said in a Jan. 19 “Talkline” interview.

Instead, Blair looked even farther ahead to the vote next November on whether citizens will empower legislators to change property tax rates. That is already a worry for local officials because property taxes account for so much of their financial support.

But Blair is already looking toward a break for property owners, maybe next year.

“It’s much better to do the broad-based personal property tax,” Blair said, “so I’m encouraging everybody to vote yes because we’ve got a path forward to be able to eliminate that.”