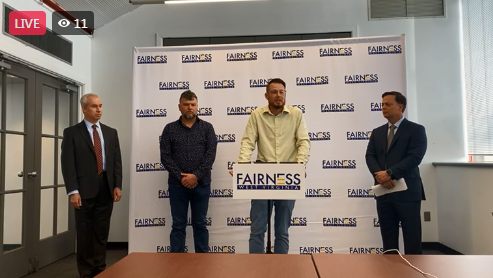 Trevor Anderson, a gay man who lives in Charleston, was shopping at the Kanawha City store when he said the manager used homophobic slurs while he was trying to return a number of items, including a piece of women’s clothing.

“The man asked me why I was returning them. I replied ‘they didn’t fit.’ He looked up at me and said ‘well, maybe you shouldn’t be trying on women’s clothing.’ I stopped and kind of froze,” Anderson said during a Wednesday news conference.

Anderson said he then asked the manager for his name and contact information.

“He looked up at me and, without missing a beat, he said ‘I’m not giving my number to a f____t.’ I was disgusted and I felt humiliated,” Anderson said.

It didn’t stop there, Anderson said. In the lawsuit, he claims the manager took his shirt off and chased him out to the parking lot.

The incident has negatively impacted Anderson’s every day life.

“Since that day, I’ve been looking over my shoulder,” he said. “There have been times where I didn’t want to run errands, go out in public or even go to work. The anxiety of leaving my house is just too much to handle.”

“The truth is discrimination is a real problem in our state. That’s why it’s so important that we have laws on the books to protect people like Trevor,” Schneider said.

“In five months, no apology, no acknowledgement and, to my knowledge, no reprimand or discipline of its manager,” Salango said. “If Spirit Halloween won’t voluntarily accept responsibility, it’s my job to make a jury hold them responsible and that’s exactly what we intend to do.”

MetroNews has reached out to Spirit Halloween for comment, but we have not received a response.