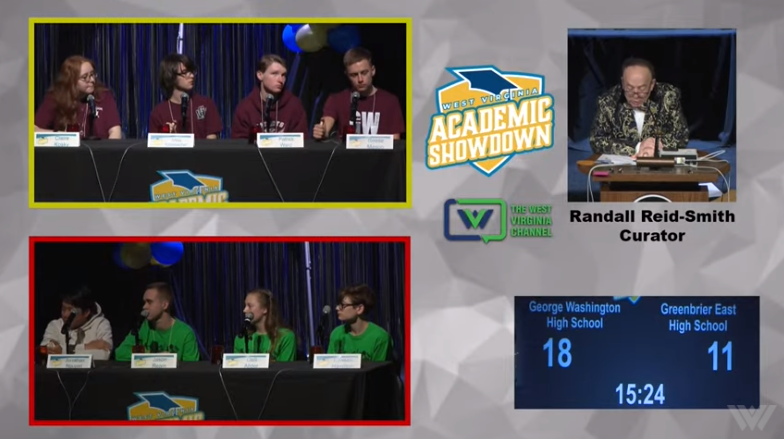 Eight high school teams from across the state competed in Charleston Friday.

CHARLESTON, W.Va. — High school students from across state were in Charleston Friday to compete in the West Virginia Academic Showdown Championship.

The event took place at the state Culture Center.

Regional winners from eight high school teams have earned a spot in the finale.

By Friday afternoon, George Washington High School had claimed the title after defeating Spring Mills in the championship round.

Clayton Burch, the state superintendent of schools, offered words of encouragement to the students before the competition started.

“All of you students, this might be the first year in a couple years you’ve actually had a full year of school,” he said. “You’ve stayed in there. You’ve hung in there. You are the best of the best.”

“We hope that you’ve been exposed some institutions that you weren’t otherwise exposed to and maybe it’ll make you think about staying in state and going to one of our colleges,” she told students Friday.

During the event, Reid-Smith, who also serves as the curator of the state Department of Arts, Culture and History, presented an award to state Senate President Craig Blair for his dedication to the arts.

Blair said he hopes the competition will continue year after year.

“Our best and brightest need to be showcased like our athletics in this state. Then, our job is to make sure that we find and gain full employment so that you don’t have to leave this state. You can stay here, work, live and raise a family,” he said.

Spring Mills advanced to the championship after topping the field made up of teams from Sherman High, Berkeley Springs High School and Ripley High.

The day-long championship was being streamed on the West Virginia Public Broadcasting YouTube page.