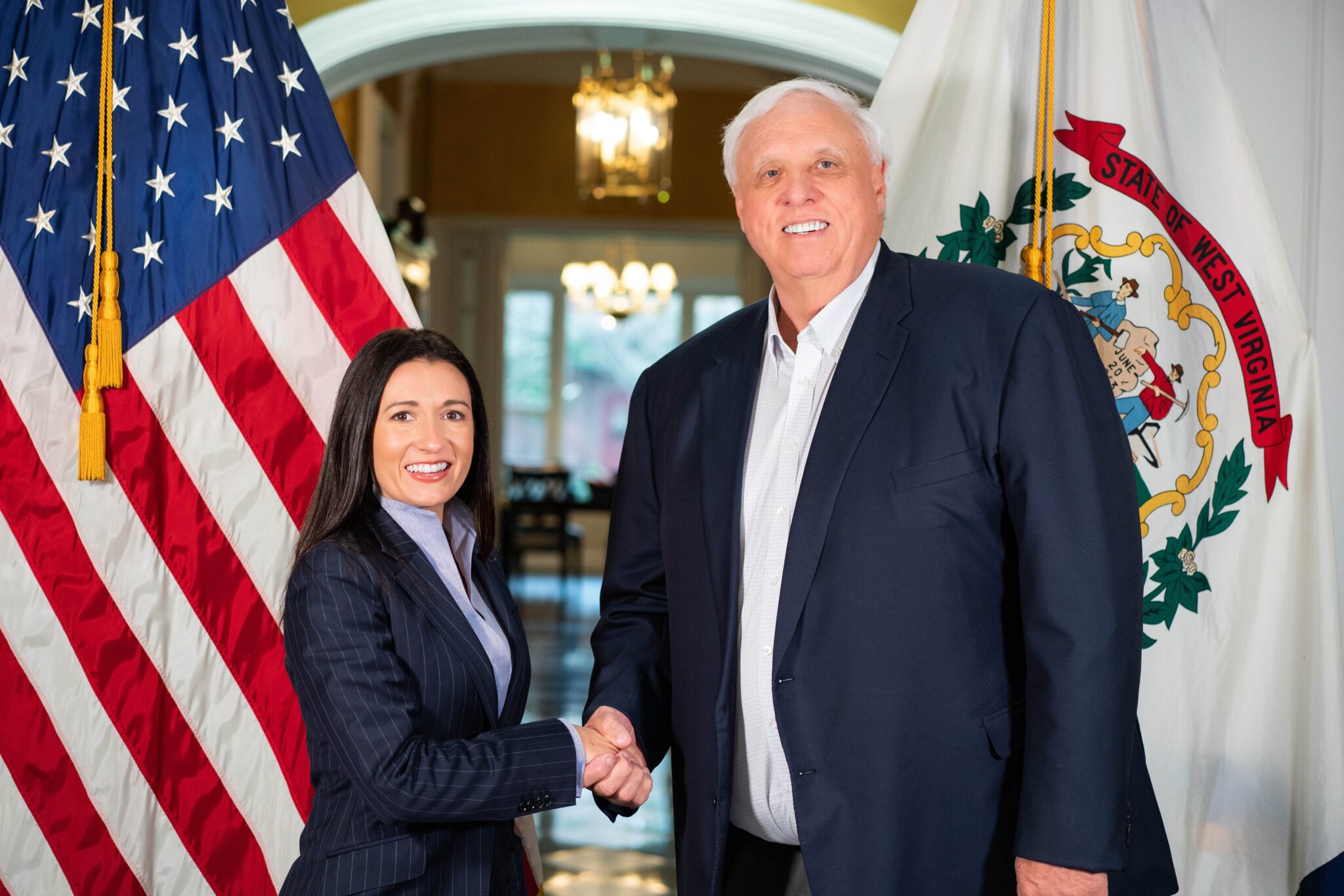 Gov. Jim Justice greets Haley Bunn, an attorney he is nominating to serve on the state Supreme Court.

The appointee to be West Virginia’s newest Supreme Court justice is Haley Bunn, a lawyer with Steptoe & Johnson who grew up in a Wyoming County coal mining family.

Gov. Jim Justice made the announcement today, moving to fill the court vacancy that resulted from the departure of Evan Jenkins. Bunn would serve the remainder of an unexpired term until the seat is up for election in 2024.

“I really have been feeling a call-back to public service and serving the people of West Virginia,” Bunn said today on MetroNews’ “Talkline.” “And I’m excited and honored to have the opportunity to do so in this capacity.”

Bunn said already today that she plans to run for the seat when it is on the ballot. “I plan to seek election and hope that these couple of years on the bench will prove I’m the right person for the job,” she said.

.@WVGovernor announced Haley Bunn as the next civil defense attorney to the WV Supreme Court. Haley talks about being named to this position to @HoppyKercheval. WATCH: https://t.co/yCFQ3nDJuy pic.twitter.com/tohndiGzJH

In addition to her current civil defense work, Bunn has been a federal prosecutor in West Virginia’s southern district. During her federal service, she prosecuted a series of public corruption cases in Mingo County that drew national attention and resulted in the convictions of four elected officials.

In 2017, the United States Department of Justice selected her as one of 12 prosecutors in the country to serve in a newly created Opioid Fraud and Abuse Detection Unit, where she took a leading role in combating the state’s opioid crisis.

“I’m committed to the rule of law above all,” Bunn said today.

Bunn was one of nine applicants for the vacant Supreme Court seat.

“Haley will be a strong conservative voice on the court,” Justice stated today. “She understands the importance of faith, traditional values, and law and order. Those things are the backbone of West Virginia. And she knows that for our economy to continue growing, employers and job creators have to be confident they can get a fair shake in our courts.

“She’ll apply the law fairly and impartially, and she’ll be a Supreme Court Justice that all West Virginians will be proud of.”

The Supreme Court seat opened after the Feb. 4 announcement by Justice Evan Jenkins that he would resign to return to the private sector.

Jenkins was named to the court on Oct. 1, 2018, to temporarily replace Justice Robin Davis, who stepped down after a legislative inquiry into the entire court. Jenkins was elected to the seat in November, 2018, for a term that ends in 2024.

After that announcement, Governor Justice said the Judicial Vacancy Advisory Commission would immediately begin the process of filling the vacancy with an appointee to serve on the court until the people of West Virginia elect a new justice.

Originally, the appointment would have lasted until next fall’s General Election, when Supreme Court candidates would have been on the ballot to serve for the remainder of the term.

But lawmakers passed a bill during the most recent legislative session to say the governor’s appointment would stand if the unexpired term is no more than three years. The bill applies to a range of judicial vacancies ranging from the local level to West Virginia’s highest court.

So had  the bill not passed, the appointee or whoever would have won the 2022 special election conceivably could have been on the ballot twice in short order.

Hutchison and Armstead originally began serving on the Supreme Court through appointments by Justice, although each has since won election.

“Haley Bunn is a wonderful West Virginia story,” Justice stated in an announcement of Bunn’s appointment. “She’s a coal miner’s daughter and a daughter of southern West Virginia who’s committed her life to serving her state and her community.

“She’s from Wyoming County, where the opioid epidemic hit as hard as it has anywhere in America, and she decided to devote much of her career to fighting that epidemic. Haley’s also a seasoned courtroom veteran whose experience as an elite litigator will be invaluable on our Supreme Court of Appeals.”