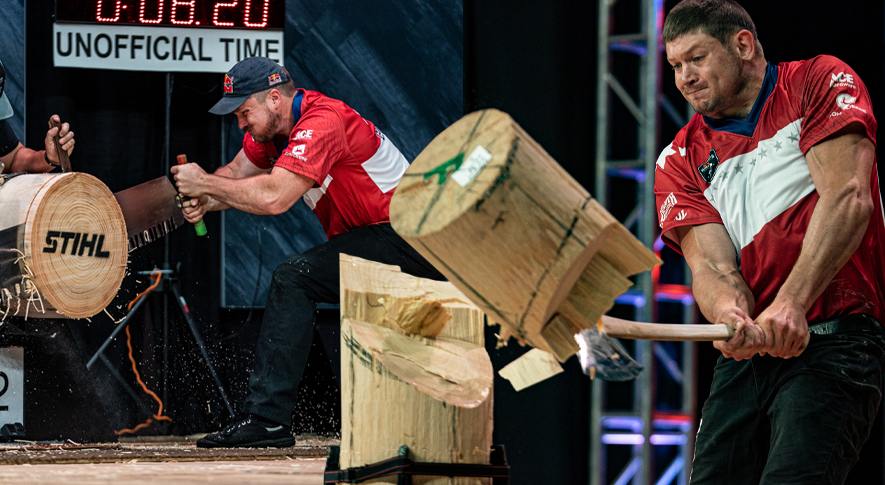 West Virginians Matt Cogar (l) and Jason Lentz (r) are among the cream of the crop in lumberjack sports.

CHARLESTON, W.Va. — As timbersports crank up for a new season, West Virginia continues to be well represented in the world of lumberjacking.

The Mountain State’s long heritage in the wood products industry will be on display for the world again this weekend when the Stihl Timbersports Series holds its first event of the season in Virginia Beach, Va. In fact, West Virginians make up a third of the field in this weekend’s events.

Matt Cogar of Grafton, Jason Lentz of Diana, Arden Cogar, Junior of Charleston, and Josh Wilson of Morgantown will be among 12 competitors working for a shot at moving on to the World Trophy Event in Vienna, Austria.

The Cogars are considered the First Family of Timbersports. Matt Cogar and his cousin Arden Cogar Junior are part of more than 20 members of their family who compete at various levels of the sport. They’ve been part off the competitions for decades. Matt is a six-time U.S. Champion and the 2019 World Trophy Champion. He admitted there is a degree of respect and a higher standard for his family name on the circuit.

“I guess there’s a little bit of expectation there, but honesty I’m just happy to do the sport and represent the family and West Virginia in the sport I like to do,” he said.

Webster County native Jason Lentz is a fourth generation competitor as well. His family originated in Oregon and eventually made their way to West Virginia in the early part of the 1900’s seeking fortune in the timber business in the high country of the Mountain State. His grandfather and great grandfather were legends in the original lumberjack events at the mountain lumber camps in the West Virginia hills. His dad, Mel Lentz Junior is still on the circuit and still in the timber business, but slowing down as he nears retirement.

“I just go out and enjoy it. There’s no pressure really. I’m my own person. It motivates me a little bit to try and do something they haven’t done,” said Jason who is the reigning U.S. and World Champion.

The countdown is on! In exactly four months, it’ll be time for World Trophy action! 💥 We are reminiscing about the final heat of the Champions Trophy 2019, where Laurence O’Toole and Matt Cogar battled it out! We are SO ready for this year’s TIMBERSPORTS® season! Are you? pic.twitter.com/3cfd7PpcWP

The Virginia Beach event will be the first time a U.S. Trophy event has been held there. The Champion’s Trophy is a measure of not only logging skills–but also speed and stamina. It starts with cutting a slice off a log with a stock chainsaw then moves to the underhand block event. There, a competitor must cut a log in half with an axe while standing on the log. The third leg of the relay involves the single buck saw and lopping off another disc from the first log. The race concludes with a standing cut in which the competitor must chop a standing log in half, replicating chopping down a tree. Most competitors at the highest level can complete the course in the neighborhood of 120 seconds.

Cogar said it takes two different kinds of training to be ready.

“Being just physically fit and going to the gym with a normal fitness routine and cardio is the first part. Then there’s ‘chop fit’ where you need to be in the right shape to hone the skill set to cut properly and be able to do the disciplines themselves,” he explained.

Cogar’s best events are swinging the axe. His favorite is the spring board. Competitors are required to cut a notch to hang a narrow board, then stand on that narrow board to cut another notch for another board. Once they jump onto that bouncing narrow perch, they must fell the tree from 9 feet in the air. It’s an event which replicates how trees were brought down in the early days of logging in the United States. The roots were often too wide to get to the heart of the tree trunk. Cutters therefore had to find a way to get above the root ball and still be able to work and the spring board technique was born.

“It’s just something I’ve really spent a lot of time doing. I’m not saying that I’m not good at the other stuff. But that’s what I started off with and really wanted to hone in on,” Cogar explained.

Lentz excels in all of the disciplines as well, but he comes from a long line of sawyers and his work with a sharp cross buck saw is hard to beat.

The Stihl Timbersports series is the major leagues of the sport, but a lot of competitors travel from competition to competition just winning prize money and building their cred. Lentz is contractor by trade and competes regularly. Cogar however, is a full time lumberjack athlete working for sponsorship money. His main backer is Red Bull, but he’s always looking for more to help expose products and new people to the sport.

The West Virginia pride will shine brightly as the wood chips and sawdust fly this weekend in the Old Dominion.

Outdoors
Beagle owners from far and wide come to W.Va. for competition
Beagle owners from all over the country share their passion for breeding and running champion hunting dogs in a recent West Virginia field trial.
By Chris Lawrence
Outdoors
Pennsylvania angler lands a state record fish on a miserable day
Fishing in torrential rain, Ayden Minick of Mt. Pleasant, Pa. hooked into a beast while taking part in a fishing get together with friends on Summersville Lake.
By Chris Lawrence
Outdoors
Kanawha County angler talks about catching record breaking catfish
Cody Carver of Dry Branch said the weather was so nasty, he almost didn't go fishing the day he caught the heaviest blue cat anyone has ever caught in West Virginia.
By Chris Lawrence
Outdoors
Multi-Million dollar upgrades at Bowden Hatchery near completion
DNR has spent close to $12 Million to modernize and improve the Bowden Trout Hatchery in Randolph County.
By Chris Lawrence
View AllHoppy's Commentary