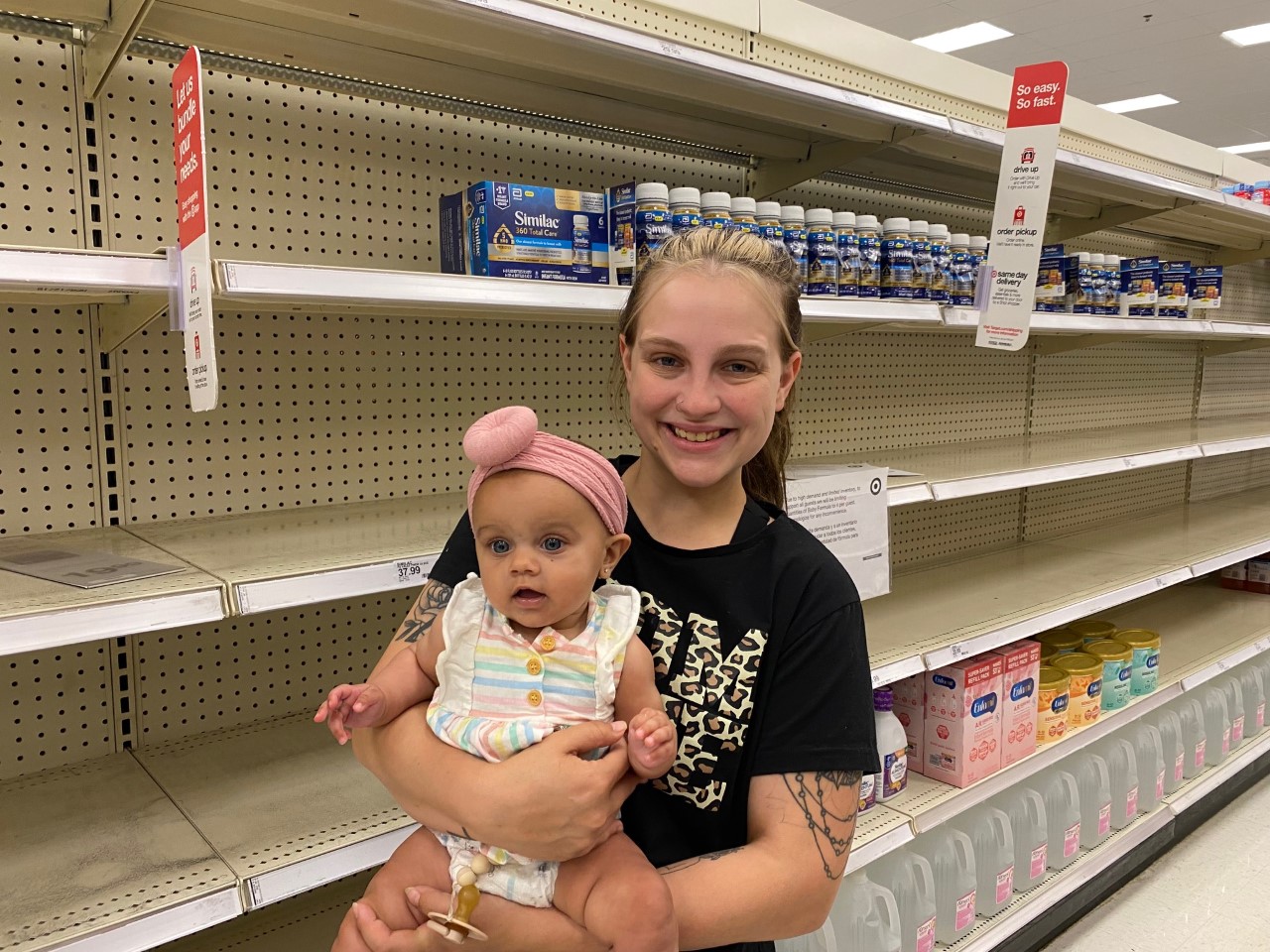 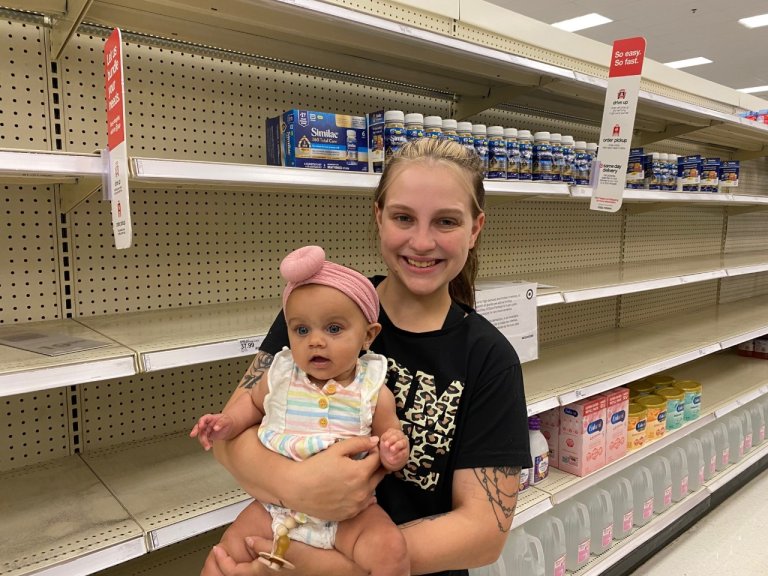 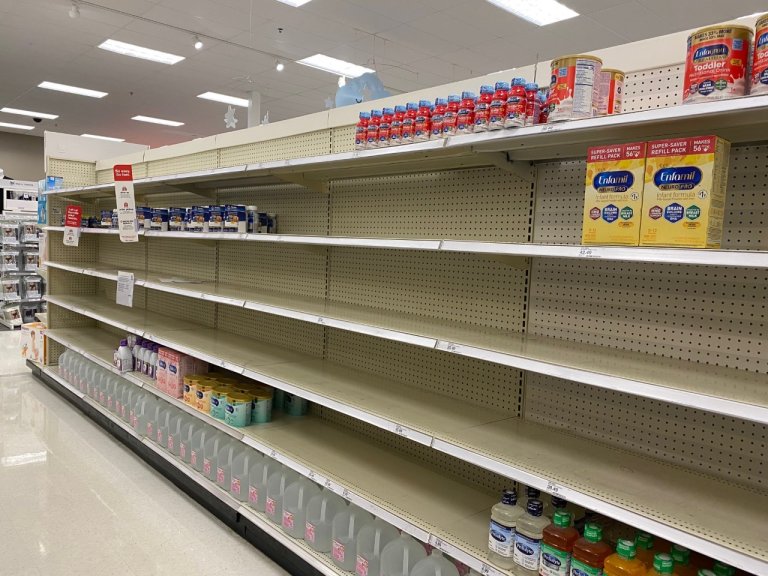 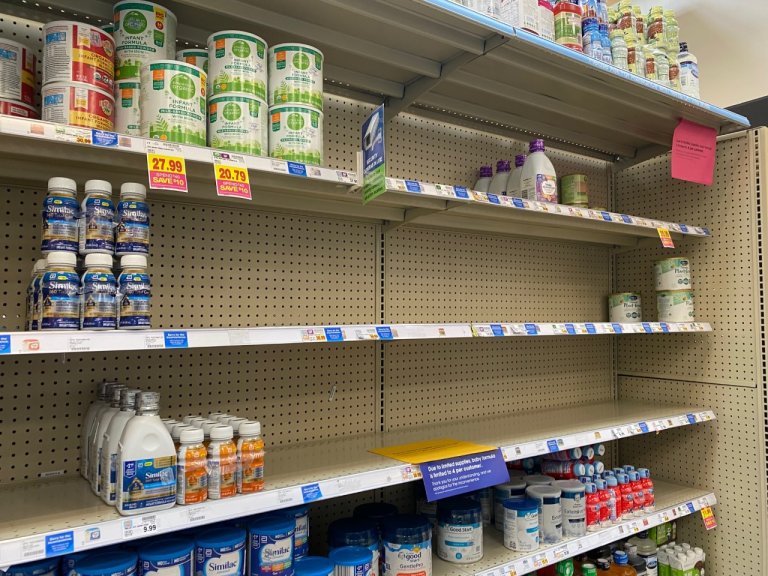 Hardly any baby formula spotted at the Kroger off U.S. Route 119 in Charleston. Carrie Hodousek/WVMetroNews

CHARLESTON, W.Va. — The search for baby formula has become a daunting task for new moms in West Virginia amid a nationwide shortage.

Faith has a five-month-old daughter who requires a special hypoallergenic formula. Since February, the Gerber brand she uses has been sold out everywhere.

The shelves in Target and nearby Kroger were cleared out Friday morning.

“There’s literally nothing,” she said in disbelief. “They stock it, there’s a few of them and then they’re gone within 20 minutes.”

“One day it was there & then overnight it stopped,” says Charleston mom Miranda Faith who was in Target at Southridge to find baby formula as the nationwide shortage continues. She’s a photographer & has given free sessions in exchange for milk + has traveled to VA. @WVMetroNews pic.twitter.com/y8HKwaVAaV

Faith has gone to great lengths to get her hands on formula by crossing state lines and reaching out to moms on Facebook.

“I stopped at over four stores from Virginia to West Virginia and nothing. I just started bawling my eyes out. There’s literally nothing you can do,” she said.

She said moms have been sharing photos online of stores that do have formula, but then the products are sold out by the time they get there.

Faith has tried contacting pediatricians to find a temporary solution, but she has always come up short.

“I had to take her to the ER one time because we don’t have formula. What are we supposed to do? They don’t even have sample cans. They’re running out of everything too,” she said.

As a photographer, Faith has been offering sessions to families, and mothers specifically, in exchange for donor milk.

At this point, Faith said she’s running out of options.

Across the aisle, Charleston mom Brianna Hall was shopping for diapers. She breast feeds her three-month-old-son and said she can’t image having to scramble to find food for her baby.

“Some babies need specialty formula that I know a lot of people are struggling to find, so I’m sure it’s terrifying for people that need that,” Hall said.

More than 40 percent of baby formula is out of stock nationwide.

Parents are being urged not to make their own formula when they come up empty at retail stores.

“I would not listen to anything on the Internet. Our health is way too important for that,” Del. Kayla Young (D-Kanawha, 35), a mom of young children, said on Friday’s “MetroNews Talkline.”

The baby formula shortage is a real problem. @kaylayoungforwv joins @Hoppykercheval to emphasize the severity of the shortage. WATCH: https://t.co/yCFQ3nDJuy pic.twitter.com/BeiQjPfpNW

Young wrote a letter to President Joe Biden urging the White House to do more to increase formula production. She said it’s not a political issue.

“I do think it’s something that we can work together to fix really quickly. Congresswoman (Carol) Miller’s folks reached out to me to let me know that she has already requested that the President do this as well,” Young said.

The formula shortage is a terrifying crisis for parents of infants. Breastfeeding isn’t for all.

Today I wrote to @POTUS, WV’s members of Congress, and our Governor to encourage the use of the Defense Production Act to speed up formula production. We must step up for families. pic.twitter.com/T2EZgEs2XB

A spokesperson with the state Department of Health and Human Resources told MetroNews the West Virginia WIC (Women, Infants & Children) participants may be able to fulfill some of their monthly formula allowance from a WIC clinic.

Typically, WIC is not allowed to issue formulas to participants from “stock” in the WIC clinic. These are formulas that have been purchased and returned to the WIC clinic due to a participant’s child not tolerating the formula. Because of the formula shortage, the U.S. Department of Agriculture is temporarily allowing WIC programs to reissue any formula in stock.

Young said there’s not much that can be done at the state level to fix the problem.

“They did loosen their regulations as much as they could, and I’m sure that’s helped, but it really is a federal issue,” she said.

Young is suggesting other facilities open nationwide and to increase imports from other countries to get more formula on shelves here in the U.S.

The White House is also cracking down on price gouging, especially online, and urging people not to hoard formula.