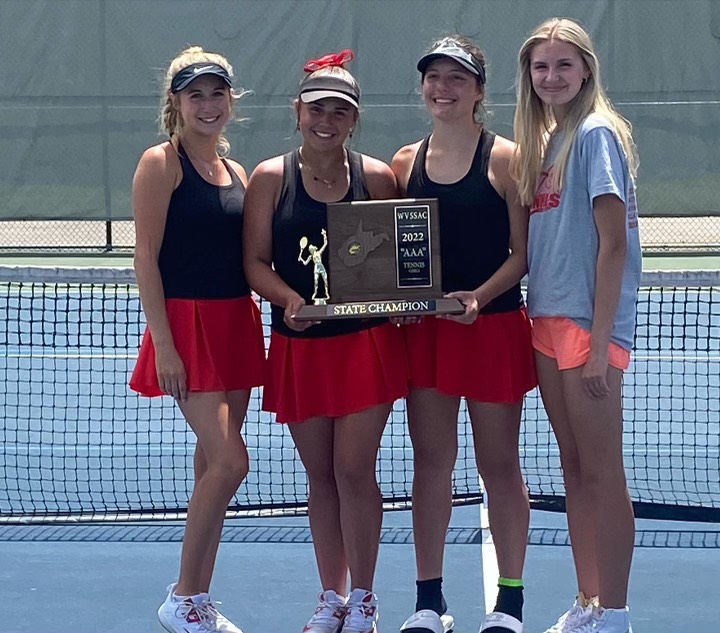 CHARLESTON, W.Va. — Hurricane tennis coaches Ashley White and Kendra White were impressed with the chemistry of the Redskins’ boys and girls tennis teams throughout the 2022 season.

Behind one singles title, a doubles crown and three second-place finishes, Hurricane’s boys team notched its first team title in school history with 16 points. The Redskins dethroned George Washington, which had won three straight titles and finished runner-up with 11 points.

“From the beginning of the season, we kind of knew we had something special,” said Hurricane boys coach Ashley White. “We had a lot of talent on the team and a lot of great kids with awesome attitudes who worked hard. We kind of knew this might be a good year for us as a team and not just individually.

“One of the things they’ve done throughout this season that I’m so proud of them for is worked together as a team. It’s easy for tennis to be an individual sport where you just focus on your own matches, but this has been a team effort the entire time. They support each other and they are in each other’s corner constantly.”

Curry Taylor gave Hurricane a No. 3 singles champion with his 6-3, 6-0 victory over Huntington’s Will Touma.

In doubles action, the Redskins won the No. 3 final when the duo of Kellen Pauley and Elias Kave teamed for a 6-4, 6-4 victory over Morgantown’s Wyatt Abbitt and Steven Tian.

“These kids’ commitment to playing was important,” Ashley White said. “They do clinics in the offseason that they didn’t need to do. They would finish a match and sometimes stay and play extra just to practice more. After the first day of states, some of them went out and practiced again.

“That consistent work for them helped. The other thing is they all are so mentally strong and they keep a good attitude and stay positive. People maybe underestimate the power of that, but for them, that was a big part of the success the whole season and here.”

Hurricane nearly had another singles title from its lone senior Domenick Hoh, who suffered a hard-fought loss to Abbitt in a match that took more than 4 hours to finish. Abbitt claimed a tight opening set 7-6 (10-8), before Hoh bounced back to win the second set, 6-3. Abbitt, however, had his way in the third and final set, which he won 6-1 to take the No. 4 crown.

“You have to try to tone out the crowd, which is hard, especially for someone who hasn’t played many state matches,” Hoh said. “States is just a completely different game. The pressure is at an all-time high for high school tennis and you have to get used to that pressure. I had an exceptional amount of pressure this year, because this is my last year.“

In the No. 2 doubles final, Huntington’s Jackson O’Roark and Ryan Patterson defeated Taylor and Hoh 6-1, 6-1.

Cabell Midland’s Ashton Cottrell was the No. 1 singles champion, a title he earned with a thrilling 6-4, 2-6, 6-4 win over Rohen Jones.

Samir Jones gave the Patriots a No. 2 singles title with a 6-2, 6-2, win against Patterson.

For the Hurricane girls, there were three singles titles and a doubles crown that led the program to its first title just like the boys. The Redskins finished with 15 points to edge defending champion Huntington, which was runner-up with 13.

Lexi Smolder scored a 4-6, 6-1, 6-2 victory against the Highlanders’ Baby Jordan for the No. 1 singles title. For Smolder, it was the perfect way to cap a successful career that featured a state championship as a freshman, before losing out on her sophomore season after the pandemic began and then falling short in a state final last season.

“Lexi split sets and grinded through and did it,” Kendra White said. “This year we really focused on her mental game. She’s a strong player and the strongest in the state by far. But mentally, she had started to let the crowd and other things get to her. My focus with her all year has been on mental toughness and focusing on the positive things that are happening instead of the negatives.”

Katy Limanen provided Hurricane with a No. 2 singles championship as she defeated Huntington’s Molly Archer 7-6 (7-5), 6-3.

The Redskins’ third singles champion was Savannah Allen, who took the No. 3 crown with her dominant 6-0, 6-2 win against the Highlanders’ Tess Weiler.

“I didn’t tell them that we needed all of them to win,” Kendra White said. “I don’t know if they knew on their own, but I did not divulge that information to them, because I don’t like for them to play under pressure.”

The other singles champion was GW’s Jana Zatar, who claimed the No. 4 title with a 6-1, 6-2 win over Morgantown’s Maddie Carver.

GW also produced a pair of doubles titles with Jeeya Patel and Molly Grimm beating Weiler and Ava Garmestani in the No. 2 final, while Zatar teamed with Emma Ratrie for a victory over Washington’s Mila Catrow and Anna Walter in the No. 3 final.