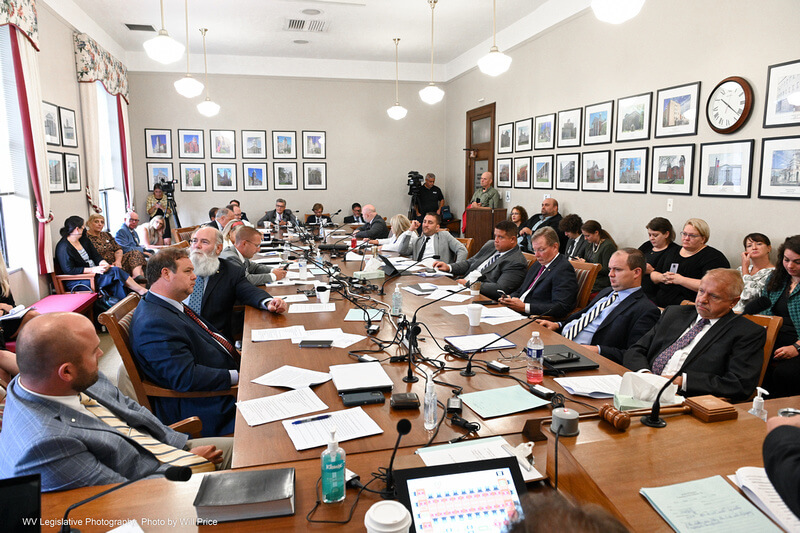 The committee room for House Judiciary is packed with delegates and observers during consideration of an abortion bill. (Will Price/West Virginia Legislative Photography)

For the second day in a row, majority members of a legislative committee voted down amendments to an abortion bill that would have stripped away criminal penalties and added exceptions for rape and incest.

Those policies are likely to be major dividing lines all the way through a special session where West Virginia lawmakers are considering a comprehensive abortion bill.

Exceptions for rape and incest were in a draft copy of the bill that was circulated around the House of Delegates on Monday. But by the time a bill was considered in committee, the exceptions had been removed.

Now, as the bill is on the edge of passage in one chamber, passionate debate has surrounded those questions. That’s unlikely to change.

The Prevent Child Abuse West Virginia organization on Tuesday afternoon blasted lawmakers for rejecting the exceptions for rape and incest.

“This action to force raped children to give birth is state sanctioned child abuse,” the organization stated.  “Children deserve to be cared for and nurtured, so that they can grow up happy and healthy. Child abuse victims deserve access to trauma-informed services that help them heal — not be forced to endure a pregnancy and give birth to their rapist’s offspring.

“We have seen rape victims as young as 10 and 11 years old who need abortion services. These children are victims, and the medical professionals who care for them are not criminals.”

The House of Delegates has the bill up for amendments and passage during a noon Wednesday floor session. After that, the state Senate will begin considering the same policy questions.

“I think the main debate right now is probably around whether you exempt cases of rape and incest,” Tarr, R-Putnam, said on “580 Live” on WCHS Radio. “I think that goes beyond party affiliation. It comes down to a lot of anecdotal stuff that people have experienced in their family and what that means to them.”

But Tarr indicated he opposes the exemptions.

“I feel like a child that may be ill conceived is still a life. There’s still life at conception with that child and killing the child in the womb is no different than killing a child when it’s 20 years old. Say, ‘Well, your child was a rapist so we’re going to shoot you in the head. That’s just absurd.

“And to say that we’re going to save the mother from harm by not having her carry a pregnancy to term that was due to rape or incest, you can’t assume that there’s no harm to this lady for having gone in and choosing to kill a child. She’s going to have to live with that the rest of her life.”

A public hearing is scheduled for 9 a.m. Wednesday in the House of Delegates. Then, about noon, delegates are to consider amendments and passage.

A rally in support of abortion rights follows the public hearing.

The majority on the House Health Committee advanced the bill on Monday, voting down proposals to remove the criminal penalties and to add the exemptions for rape or incest.

Then on Tuesday morning, a majority on the House Judiciary Committee did the same.

The exemptions prompted vigorous discussion, with Delegate Steve Westfall, R-Jackson, saying he could go along with them if there were a 6-week limit after conception. Without a limit, Westfall doubted rape or incest exceptions will be included in a bill.

“I am not a woman; I’ve talked to some people. I couldn’t imagine being raped or being a 12-year-old and being pregnant by my stepdad or something. So I’m trying to save an amendment. I don’t think an amendment as-is will pass.”

A majority of committee members voted down Westfall’s six-week time frame amendment and then voted down a main amendment representing the rape and incest exceptions.

“We are talking about women, especially young girls, who are forcibly penetrated, who may be terrified, who may be in a relationship, who don’t have anywhere else to go,” said Delegate Lisa Zukoff, D-Marshall.

Democrats on the committee expressed outrage over the bill.

“I said earlier, these questions keep coming. I wonder why. You bring them before us. This your choice to do this. This is about control. And I just wish you would leave people alone.”

Delegate Tom Fast, the vice chairman of Judiciary, said lawmakers are taking up the abortion issues because they have to.

“We are acting because of necessity, taking action due to the Supreme Court’s actions,” said Fast, R-Fayette.