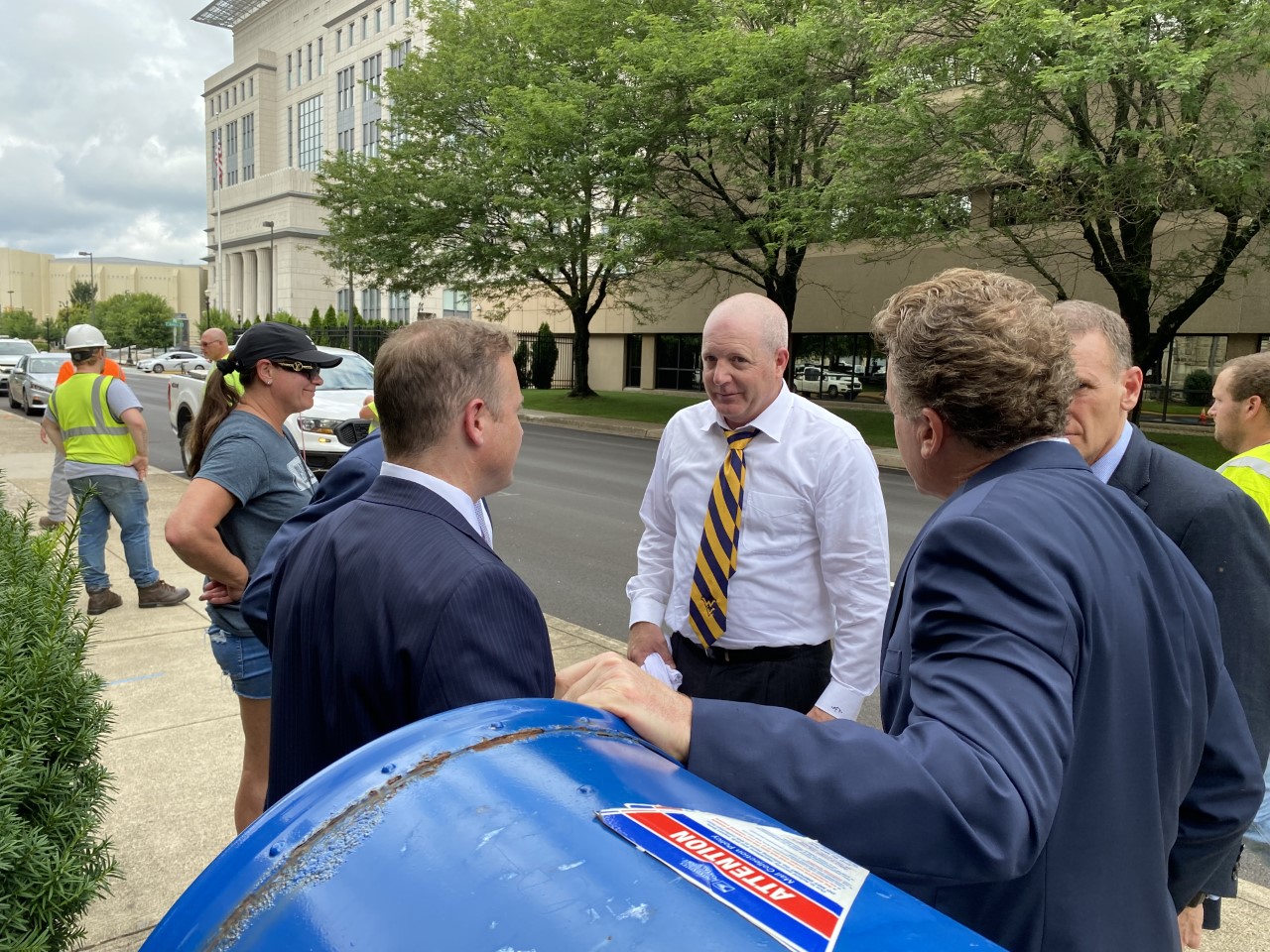 Paul Farrell and other attorneys discuss the $400 million settlement Monday in Charleston. (Photo/MetroNews)

CHARLESTON, W.Va. — Three large opioid distributors will pay dozens of West Virginia counties, cities and towns a total of $400 million for their roles in the opioid epidemic in a settlement announced Monday.

AmeriSource Bergen, McKesson and Cardinal Health admit no guilt in the settlement with 54 counties and 120 municipalities but the companies, known as the ‘Big 3’, have agreed to pay damages. The payment will come in over 12 years.

The case was scheduled to go to trial on July 5 but was postponed as settlement discussions continued.

Paul Farrell, one of the lead attorneys for the plaintiffs, described the settlement as a “phenomenal recovery.”

“It’s a substantial settlement. It’s the largest settlement in the history of our state and West Virginia is going to receive more money per capita from the Big 3 than any other state in the country,” Farrell said.

The plaintiffs would have presented evidence focused on the dumping of millions of opioid pills into West Virginia communities fueling the epidemic.

Co-counsel Bob Fitzsimmons said the plaintiffs would have received as much $240 million less from the distributors if they would have taken part in the national settlement. He said the settlement is also front-loaded.

“It (the settlement) also has this acceleration clause that it’s payable over 12 years and the national was actually over 18 years,” Fitzsimmons said.

All of the counties, cities and towns must sign-off on the terms of the settlement before it becomes final. Farrell expects that to be completed in about a month.

The settlement money will be distributed through the West Virginia First program operated out of the office of state Attorney General Patrick Morrisey. He’s entered a memorandum of understanding with the plaintiffs. Most of the money collected in settlement, approximately 75%, will go toward abating issues caused by the epidemic.

“This settlement, along with other settlements from other cases, will provide significant help to those affected the most by the opioid crisis in West Virginia,” Morrisey said in a statement. “I’ve always said that at the end of the day, West Virginia will have the highest per capita settlement results in the nation fighting for our people.”

Charleston attorney Rusty Webb, who represents more than 40 of the counties, cities and towns, said the West Virginia First program will get the money to where it’s needed more quickly.

Farrell admitted the settlement was “bitter sweet” because it comes less than a month after U.S. District Judge David Faber announced his decision in favor of the ‘Big 3’ in the 2021 federal court case involving Huntington and Cabell County. Faber ruled the plaintiffs would receive no damages.

Farrell said Monday each case has its own identity.

“Although we were disappointed with the results of the first trial we stood up on the second trial and they (Big 3) decided to settle the whole state and we are pleased with that,” Farrell said.

Huntington and Cabell County will not receive any money from Monday’s settlement. Farrell added an appeal of the federal trial result is being prepared.

Webb concluded $400 million is a lot of money but doesn’t come close to covering what the opioid epidemic continues to cost the state.

The attorneys involved in the case waived their traditional contingency fees. Instead, the state’s Mass Litigation Panel will decide at a later date how much of the $400 million will go toward attorney’s fees.

The next opioid-related trial is set for September when the state takes big chain pharmacies to court for their role in the epidemic.

According to Morrisey’s office, not counting the $400 settlement, the state has secured more than $296 million from opioid manufacturers and related parties including: