MORGANTOWN, W.Va. — This year’s $690 million sale of Hope Gas, Inc., to Hearthstone Utilities, Inc., is expected to create jobs and leverage the price and supply of natural gas for economic development.

The deal, which was originally announced in February, is expected to close this week.

CEO Morgan O’Brien said West Virginia sits on some of the largest supplies and it can be used to raise the standard of living and offer a cost-effective source of energy for business development.

“Look at what opportunities that natural gas can play in West Virginia,” O’Brien said Monday during an appearance on MetroNews “Talkline.” “Both, improving peoples’ lives, the families that live there, and playing a role in economic development is really exciting for us.”

As part of the deal, Hearthstone plans to open a corporate headquarters that will employ about 100 people in the former Mylan facility on Chestnut Ridge Road in Morgantown.

But O’Brien said while natural gas is readily available in West Virginia, facilities to get the product to the user are inadequate. He said that opens the door for innovation.

He said a microgrid could be an option. It’s an exclusive energy grid capable of operating completely independent from the established power grid. The microgrid concept can cut costs and bring reliability in problemed remote areas, O’Brien said.

“I think there are a lot more opportunities i the energy space to do things like microgrids, put small energy facilities at locations that create economic advantages because of the inexpensive natural gas.”

Hearthstone, which is based in Illinois, is buying Hope Gas in West Virginia. What attracted Morgan O’Brien, CEO of Hearthstone, to the Mountain State? He joins @HoppyKercheval. WATCH: https://t.co/yCFQ3nDJuy pic.twitter.com/YIRJbBTqcS

O’Brien said Hearthstone would bring their expertise in distribution to the state economy. Getting more natural gas to the market could stabilize prices, encourage business growth and make it more affordable for residential customers.

“We want to work with the West Virginia gas producers to allow more gas to be drilled and at the same time partner with economic development leaders in the state to drive more need for natural gas,” O’Brien said.

O’Brien said lowering the cost will help and expanding distribution will help expand across the state including underserved communities. A competitively priced readily available energy resource could have economic impact within the first year of ownership. 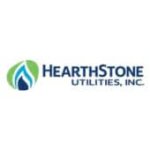 “We’re going to change the role that a distribution company plays,” O’Brien said. “The goal of that is to use more gas in West Virginia by creating economic growth and work with producers to bring more local West Virginia gas into our system.”

“Cheaper gas, more plentiful gas and use that to hopefully be able to attract more investment in the state,” O’Brien said.

Hearthstone specializes in distribution operating water and natural gas companies that move the products to more than 100,000 customers in seven states.